“I am excited about the campaign because I am very lucky to be in this campaign with all my friends. It’s like the world come true – it’s like the world is better quality. This campaign is the future of not just grown-ups, we are people with Down Syndrome who are learning to take our own control with drama and we want to do this with the people we know and love, and who trust us. We are building our own ways up of helping other people with a disability.”
-Digby, 28

Digby Webster is a painter, potter and actor. He has been hung across Sydney, including twice in Leichhardt Library. Last week it was announced his bold landscape ‘Amphitheatre’ would be part of an exhibition travelling from Osaka to Hong Kong. Digby is also an actor with RUCKUS. RUCKUS is a professional theatre group now based at Erskineville Town Hall, after losing their previous home at Riverside Theatre a few months ago.

The RUCKUS ensemble is made up of six members: Rachel Sugrim, Audrey O’Connor, James Penny, Chris Bunton, Gerard O’Dwyer and Digby. They all have Down Syndrome.

Would that stop you from going to see one of their performances?

Chris has two jobs. He is an administrative assistant and a gym coach; he also represents Australia internationally in gymnastics. Chris studies business and health at Sydney University as part of their Inclusive Education Program. Rachel is a singer/songwriter and committed dancer. Audrey is an auteur. James is a master of slapstick, learnt from his love of old British comedies. Gerard is a theatre buff and serious Bold and the Beautiful fan. He won Best Actor at Tropfest in 2009 for his work in Genevieve Clay’s film Be My Brother.

If you only see this theatre group for their disability, well, as they say, it’s your loss.

But it’s also part of the problem facing the ensemble, where operating as a side note to large mainstream arts programs has left them with unstable funding. Their former home at Riverside Theatre’s Beyond the Square Program, an accessible arts initiative, has been lost as the program has come under review by Parramatta Council. RUCKUS’ state funding ends in December.

Being visible enough to not fall through the cracks is one of the ensemble’s core creative themes. Their first major work, See in Me, told the story of Natalie Wood, the woman who infamously died in her Surry Hills apartment only to be found eight years later.

Gerard says her story disclosed poignant concerns for the group.

“She went unnoticed,” Gerard says. “And that led us to the theme of isolation, people who are isolated, and invisibile. Everyone should be heard and seen and given a voice in the arts. Everyone wants to make a difference, if given the chance.”

Alison Richardson, the group’s facilitator, says highlighting what RUCKUS has to offer is one way of ensuring its members’ talents are not sidelined in Sydney’s own raucous happenings.

“What do we do to keep pushing ourselves out there to be visible?” Alison asks.

“Many of the members of our group are high achieving and achieve high visibility in their personal lives. In our collaboration it also often comes back to creating links with other people and sharing a sense of community.”

Two weeks ago RUCKUS launched an online crowd-funding campaign to sustain their activities. Alison says having to locate funding to stay afloat is both frustrating and motivating.

“It is a struggle because no matter how good you are, it doesn’t guarantee that you are going to be funded. They are a strong ensemble and have been together for four-and-a-half years now, which goes to show they are very committed and passionate about what they are doing. And so are their families.”

“It would be nice to think that after you have dedicated a big part of yourself to something you are recognised for it and funded, but unfortunately that’s not the case in Australia.

‘I guess it puts a fire in your belly to keep going,” she says.

The group has pushed their expectations one step further, seeking funding to collaborate on a new show called Speed of life with a sister accessible arts program in Cambodia.

“I don’t think we are going to get there,” says Rachel Sugrim, understandably sceptical. But since the campaign launch, through enormous social media efforts, the ensemble has managed to raise over $9000 towards the trip with an aim of raising $50,000 more.

Development Manager Kris Tito at Accessible Arts, the peak disability arts program in New South Wales, says that RUCKUS’ independence from Riverside Theatre will be a positive change if they can achieve financial sustainability.

“We don’t have enough independent ensembles in New South Wales that are led by artists with disabilities, creating their own content and doing their own thing. Its exciting that RUCKUS can be on a trajectory to real independence.”
On the night I join RUCKUS for their weekly rehearsal at Erskineville Town Hall, they are running through a skit in which Gerard tells a story into a giant inflatable microphone. It’s an anecdote from Gerard’s past job at McDonald’s when two customers started making fun of his manner of speech.

After Gerard finishes his monologue, the ensemble turn around to face the audience (RUCKUS’ graphic designer and myself), all holding giant microphones that are bright pink and green. They tap the top of the microphones lightly. 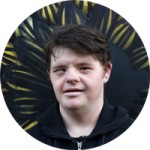 “I got acting from my grandma, when she died she said ‘I want my grandson to be an actor like me.’ Art is the best way of expressing yourself.” 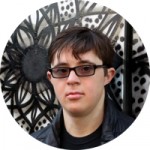 “We see whose abilities we can focus on, which we build up into shows. These break down the barriers of exclusion.” 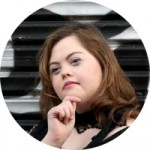 “It’s part of my life, I enjoy everything we do together. I think the campaign is going good, we are getting ourselves out there.” 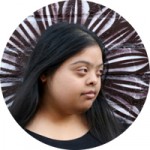 “I just want to get out there and be known, show my talents and do what I do. I love acting, singing, dancing and I love writing as well.” 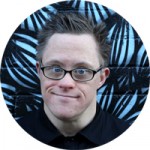 “When I heard my name called, I got a bit emotional – it was the best night ever! I can’t believe it actually happened, I won Best Male Actor.” 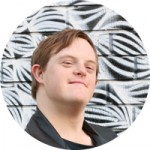 “RUCKUS is very important because everyone wants me to be in it and we do all sorts of entertainment. If we go to Cambodia we need to get loads of cash.”

You can contribute to RUCKUS’ crowd funding campaign at: www.indiegogo.com/projects/speed-of-life-sydney-to-cambodia#/ or find out more about RUCKUS by visiting their website: www.ruckus.org.au 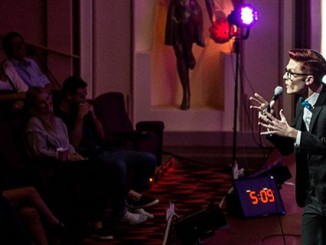