TAIS Hair Salon hosted an exhibition of reimagined waste over the weekend (December 8 and 9). Finnish sisters Anna and Tarja showcased their artwork in an eclectic arts event, transforming unwanted and discarded materials into imaginative pieces.

Their passion project ‘SISKO SISKO’ (Sister, Sister in Finnish) was born to create ‘trashion’—a fusion of art, waste and fashion.

In an attempt to challenge audiences’  views on waste and beauty, Anna and Tarja collaborated with photographer and creative director Luca Prodigo for a children’s fashion shoot, in order to spark the minds of young ones. Their ‘Roska’ (Rubbish) exhibition used plastic as the primary material for a fun and colourful fashion collection. The shoot was picked up by online children’s fashion magazine Junior Style London.

SISKO SISKO’s debut collection ‘RAJU’ was created for a hair studio photoshoot, primarily based around recycled tyre inner tubes which were transformed into avant garde fashion pieces of handbags and belts.

Anna and Tarja say their childhood taught them to re-use, mend and sell their creations, with salvaging and repurposing a major component of their upbringing.

Both their skills combine to create a unique force in the industry—Anna is a multi-disciplinary artist and educator over two decades, with numerous solo art exhibitions in Queensland and Hawaii, while Tarja’s background is in performance art and costuming. Anna prefers acrylics, with an expressionist style of broad brush strokes, while Tarja creates costumes for amateur theatre, beginning with her daughter’s dance and theatre performances.

Their ‘mini warehouse’ of unwanted resources has spurred them on to be major players in the Inner West arts scene, taking part in the RAW event, the Inner West Art Trail, and selling work at Du Moulin Gallery in Annandale. 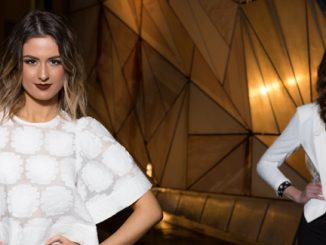