Chef Aaron Ward works with some of Sydney’s best chefs at the two-hatted sixpenny restaurant in Stanmore, and previously at Sepia. Now Aaron is being recognised as an up-and-coming culinary talent in his own right.

How did you end up at sixpenny in Stanmore?
It was a bit of the right place at the right time. I was fortunate enough to meet Dan Puskas when I was staging at Sepia while he was the Head Chef. A few months later I moved to Sydney and kept in touch with Dan who mentioned that he was opening a restaurant in Stanmore. We opened the doors in March 2012.

What was the first thing you ever learnt to cook as a child?
Growing up I would always help Mum in the kitchen making cakes and biscuits. Anzac biscuits were my favourite to make!

Do you have a philosophy behind the food you make?
I like to keep my food simple. I believe in no fuss cooking, but also keeping it refined. I source the right ingredients and take them to their highest potential. Food is a way of bringing people together, and creating a dish that can be enjoyed by the entire table is something I strive to achieve.

When did you know you wanted to be a chef?
I always wanted to be a chef. I would read recipes and watch food programs on television growing up. Cooking was always going to be the career I’d pursue. I started cooking in a local hotel in Taree, then moved to a seafood restaurant in Coffs Harbour where I learnt the respect for fresh seafood, which came daily off the back of the trawlers. I then travelled south to Newcastle where I had my first taste in a fine dining kitchen and gained an itch to work in Sydney amongst some of Australia’s top restaurants.

If you could be cooked for by anyone in the world, who would it be and why?

Jamie Oliver. Growing up I would watch him on TV. The way he uses the freshest of ingredients in an uncomplicated way and his enthusiasm towards cooking is truly inspiring.

Aaron Ward has been selected as a finalist for the Electrolux Appetite for Excellence Young Chef of the Year, a program that acknowledges and educates some of Australia’s best young chefs throughout their career.

You can vote for Aaron in the Electrolux People’s Choice Award by going to www.appetiteforexcellence.com. Voting closes August 4th. Winners will be announced on August 8th.

1. Preheat oven to 160C. Heat a heavy base oven proof pan over high heat, add 5 tablespoons of oil, season the lamb with salt and pepper and brown on all sides. Remove lamb from the pan and place the pan back on the heat.

2. Heat 5 tablespoons of oil in the pan and sweet leeks, garlic and silverbeet for 5 minutes. Add chicken stock bring to the simmer and add potatoes. Place lamb on top of vegetables and cover with foil, place in the oven for 3.5 hours. Remove foil and roast for a further 30 minutes.

3. Mix butter and mustard through the silverbeet and potatoes to make the sauce. 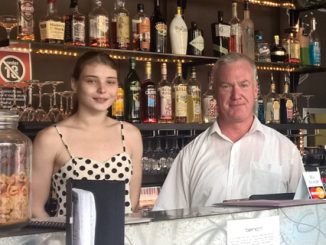 At Home with Bench Bar