Andre is the owner of popular Leichhardt restaurant Braza Churrascaria, which was the first restaurant to introduce the true concept of churrasco to the Inner West.

What makes Brazilian barbecues different from your typical Aussie barbie?
This is quite a tricky question because both in Brazil and also here in Australia, the barbecue is actually a celebration, an event with family and friends, a get together to have a few extra drinks and sort of an ‘excuse’ for partying. The main difference comes down to the cooking method and style, and also to the actual cuts of meat. In Australia the barbecue is mostly done on gas barbecues, and basically served as a meal. In Brazil, we only use charcoal barbecues, and the meats are served all day long. I have actually been to barbecues in Brazil that lasted for more than 10 hours.

Which ingredients are essential in a Brazilian kitchen?
Definitely rice and beans. They are the base of any Brazilian meal.

What’s your philosophy when it comes to food and cooking?
Food for me is all about combining the right ingredients to create the right flavours. I like to call Braza a “fine food” restaurant…simple, honest. When it comes to cooking, I have several different cooking methods but I have to say that my favourite – and the one that gives me the most pleasure – is to cook a nice piece of meat over a charcoal barbecue. And if you are vegetarian, veggies do go very well on charcoal too. The flavours that you get out of it are simply the best!

What kitchen utensil can’t you live without?
My knives, but I have to mention that a kitchen without tongs is nothing.

If you could invite anyone over for dinner, whom would you invite?
Probably the Brazilian president so I could maybe teach her a lesson.

As I eat a lot of meat in the restaurants, I tend to cook more fishy dishes at home – this is a very simple but very tasty dish, which can have many different variations as well, you just need to use your imagination.

Slice 2 ½ onions. Roughly chop tomatoes. Cut all capsicums length ways. Heat up a medium sized pot so you can fit all veggies in, add vegetable oil, wait until it’s nice and hot and then add onions, tomatoes and capsicums. Put lid on, turn it down to medium heat, and stir every now and then.

Pre-heat oven to 200 degrees. While the veggies are cooking, place the fish on a baking tray, squeeze the lemon on top. If the lemon is very juicy just use half. Crack some black pepper on top as well.

Back to the veggies, when the mix becomes more saucy, add 4 chopped garlic cloves, the chopped parsley and the salt (usually a teaspoon is more than enough). Cook for another 5 minutes. You can add chillies if you want at this point as well.

Cover the fish with the sauce, sprinkle the olive oil on top, and put it in the oven for about 20 minutes, or until it starts “burning” the tips of the capsicums.

For the rice, add cooking oil in a pan, add ½ diced onion and 2 chopped garlic cloves. Let it fry a little, always mixing so it doesn’t burn, and then add 2 cups of rice. Fry a little more, mixing the rice constantly. When it starts to stick to the bottom of the pan, add 4 cups of water and salt. Turn down the heat, cover and it’s ready when all the water is absorbed by the rice (around 15 minutes). Be careful not to burn the bottom.

*A nice variation for this dish is to add some coconut cream with the veggie mix. It gives it a great tropical touch. 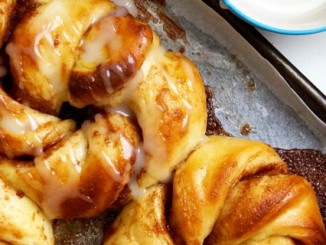