Inner West restaurateur and former owner of ‘La Casa Ristorante’, Carmel Ruggari, is back in Canada Bay with the simply named ‘Carmel’s’. Known for her scrumptious Sicilian cuisine, as well as her big smile, Carmel gets to the heart of southern-Italian cooking.

Do you still think Wareemba, Five Dock and the surrounding Inner West is the Little Italy it once was? Where do you find the best Italian food and ingredients?
Yes for sure!  We have Dolcetti Pasticerria a few metres down from Carmel’s, one of the best pasticerrie in Sydney. Rainieri Deli at Five Dock, where people come from all over Sydney to purchase their quality produce. Italian culture in the inner west is large and proud and I’m very, very happy to be a part of it.

What are the staple items in a Sicilian kitchen?
Tomatos, basil, ricotta and eggplant. To me, these items say Sicily.

How does Sicilian food differentiate itself from other regions’ cuisine in Italy?
Its simple yet rich in flavour from the island’s amazingily rich soil.  Sicily, like many other areas of Italy, follows the seasons. Which means ingredients are fresh, often produced in Sicily and taste amazing.

You also host cooking classes and food events. What do you find most exciting teaching other people?
I love watching people get excited about food, watching them taste something for the first time and seeing them giving it a go in the kitchen and then sitting down for a feast with family and friends, like we do in Sicily, with love and laughter.

Christmas is coming up – what’s on the menu at the Ruggari casa?
We usually have a family feast on Christmas eve with my parents, sister, brothers, nieces and nephews. Prawns and oysters are always on the menu and my mum’s amazing scacce and lasagne and of course panettone; panettone is the smell of Christmas for me.

Italian food has become pretty familiar to the Australians diet. How do you keep making the old, new?
You don’t. Keeping the old traditions is what people love, it’s comforting and nostalgic. “Cucina povera” for example (literally meaning poor kitchen) is an old style of cooking, using whatever is found in the kitchen to prepare meals, stemming from post war conditions where food choices were limited.  It’s about making great food with simple, yet high quality, and available ingredients.

Meatballs is from a time when there wasn’t enough meat around so they used mince bound with bread and eggs, to extend the meat to feed more people. Now it’s one of our most popular and tastiest dishes.

Sugar and cinnamon to taste

4.Cut out circles to make ravioli

5.Add one tablespoon of the sweet ricotta filling to the ravioli dough

6.Fold over ravioli dough to make half moon shape and seal edges with a fork 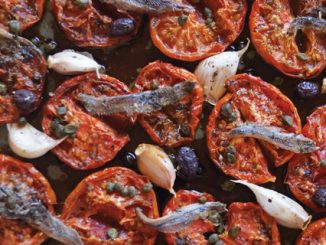