John Newton is a freelance writer, journalist, novelist and teacher from Newtown, who specialises in writing about all things food related. John will be leading a discussion about how our relationship with food reflects our culture during the Sydney Writer’s Festival, featuring guests Stephanie Alexander (Kitchen Garden Program), Lorraine Elliott (Not Quite Nigella) and Pauline Nguyen (Red Lantern). “What Our Food Says About Us” will be held from 2.30pm on May 23rd – entry is free. Find out more at www.swf.org.au.

How did you become a food writer?

I love writing, I love food. My mother was a journalist and a great cook. Much later, I helped a good friend Stefano Manfredi with his first book, Fresh From Italy, he paid me in lunches, and I took every food editor in Sydney to lunch. Commissions rolled in. I passed muster. They kept rolling in. Incidentally, Stefano and I are on to our third book. Stay tuned.

How has Australia’s multicultural heritage shaped our culinary tastes?

The answer to that question deserves a thesis – and I’m writing one. In short, our multicultural heritage has transformed into a multi-culinary heritage: Australians probably eat more foods from more places than any other people on earth. We are adventurous – in all except our Australian native foods, which we continue to shamefully ignore. And, curiously, this multi-culinary munching has not resulted in any truly Australian dishes: no lasting fusions. The food industry has run along behind our changing tastes.

What do you think the role of food is in Australia today?

Firstly, as my old man used to say, if you don’t eat, you don’t s@#t, and if you don’t s@#t, you die. That hasn’t changed. But food has always had cultural and social significance in Australia, it’s just that now, those roles have exploded. I would like to see food, or the table, play a greater role in bringing people from different backgrounds together.

How do you think our attitude to food has changed recently with the introduction of shows like Masterchef?

Masterchef has little to do with food. It is and was about competition, and what food it was about was restaurant food. I offered this view in a class I ran called Writing About Food and one of my students said “but my husband has become very interested in food since watching Masterchef. He’s now fascinated by plating.” A word with two meanings, one quite rude, but the one my student was referring to was arranging food on the plate to be served.

If you could invite anyone over for dinner, whom would you invite? Why?

Karl Marx because I want to know why such a good idea as Marxism screwed up in practice; Xavier Domingo – the great Spanish journalist and food writer – because he knew more about Spanish food than just about anyone; Charles Bukowski to see if he really was as horrible and as funny as he appeared to be; and Zelda Fitzgerald because we’ve heard enough about her bloke and it’s about time we heard from her.

Toast thick slices of good bread (Sonoma Miche for example). Rub the cut side of a half very ripe tomato (from Galluzzo’s in Glebe) over the surface. Splash on some really good olive oil (from Blackwattle Deli). Eat. 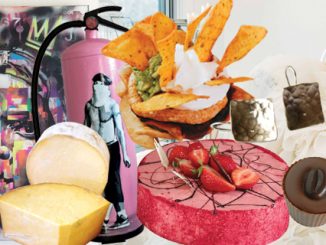