Award-winning journalist and author Mark Dapin is the director of The 2017 Creative Non-Fiction Festival in Rozelle. He can also make a burger in eight minutes.

What was the most memorable interview you did for the ‘Good Weekend’?
When Gordon Ramsay kicked me out of his house in London after 14 minutes, and it cost $4,000 to fly me over there. When the Veronicas asked me to join them in their sauna and I said “no”. I don’t know why, I think I just wanted to stay in their bar. The time the boxer Kostya Tszyu broke my rib while demonstrating a move. Is that enough?

Are you an avid chef?
I’ve never been particularly interested in food, except going out and eating. However, in October last year I went to the kebab house in Birkenhead Point and I had such a nice adana kebab, but it’s so far from my house in Birchgrove, I thought, “I need to recreate this kebab in my own home.”

I make my own lunch everyday because I work from home and pretty soon the kebab got lost in trying to make the perfect chicken burger and then the perfect beef burger. If I had a motto above my door it would be ‘Fast Food in the Home, Est. 2016’, with a crest of a burger bun, a slice of gherkin and some underpants, as that’s usually what I wear while I cook.

At the height of my cooking quest I started to think I enjoyed making burgers so much that I should get a job in a kitchen so I can see how professionals do it, but then I realised I’d gone mad.

You also seem pretty passionate about Australian history. Is there a piece of research that really changed your view of Australia’s past.
When I was writing The Nashos’ War I came to realise much of what we believe about the Vietnam War and its aftermath is more mythological than historical. We have an idea, for example, that there was no ‘welcome home’ parades until 1987. In fact there was 16 welcome home parades between 1966 and 1972. I’m doing a PhD on the historiography of the Vietnam War and where these mythological ideas originated. It’s due in a month, which is why I am doing interviews on how to make burgers.

What part of Sydney’s Inner West do you hope will never change?
Well, it’s already f**king happened. Spice I Am in Balmain closed down. I’m very, very sad about that. I hope the Marlborough in Newtown doesn’t change too much now that it’s being sold.

Firstly you need a white bread bun but not a burger bun, a burger shaped bun, with sesame seeds on top. You also need a burger patty. I get my organic mince with 20 per cent fat from QE in Balmain.

I season the mince with garlic powder, a shake of worcester sauce, and a teaspoon of Byron Bay Red Chilli sauce. While you are mixing this, heat up the frying pan until it is actually steaming.

Mould the patties and place them in the pan for three minutes on each side. Before flipping the patties over, cut the buns into two sections of equal size. (Do not make one part of the bun bigger than the other – I used to do this, it’s a beginner’s error)

Scrape two spoonfuls of horseradish relish on the bottom bun and place a slice of pickle (gherkin) on it. On the top bun put a swirl of heinz tomato ketchup and two teaspoons of piccalilli mixed pickle, then put the buns in the griller. This is a major contribution of mine to the art of burger making as this ensures the pickles and sauces don’t cool down the contents of the burger.

Take the patty from the pan, and let it stand for a minute no matter how hungry you are. Take the buns out of the grill, put the patty in the middle and eat it. 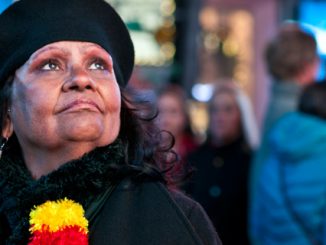 At Home with Marlene Cummins

At home with… Veeru Singh