A new era of art has come to Balmain with the merging of two brilliant galleries that have long supported Australian artists – Flourish Arts and Breathing Colours Gallery. Come along and show your support at the launch of their latest exhibition, Artistic Synergies.

Curator Robin Hill is excited to be uniting the work of both Flourish artists and Breathing Colours artists at one central location. With Breathing Colours forming the gallery and retail space of the business, Flourish is set to become a “behind the scenes” workshop space and a place for people to learn about a range of art from painting to jewellery design.

Robin’s philosophy has always been to focus on Australian artists that offer something a little special. “I enjoy a range of artwork – from the traditional to the quirky – and I’m prepared to take risks with the art I exhibit but it has to be original and well made,” says Robin. This is exactly the kind of thinking that has led her to the unique work of Rodney Swansborough
and Pearl Red Moon.

Launching at Breathing Colours on Saturday 23rd March from 5pm, the Artistic Synergies exhibition features work by this talented husband and wife team, including three series of paintings by Rodney and stunning embellished art by Pearl.

The exhibition was named Artistic Synergies because it joins two artists in a collaborative exhibition, creating a kind of synergy where different creative elements are united. Coincidentally and fittingly, the name also reflects the synergy of the two galleries coming together.

Pearl’s work in itself brings together various traditions including sewing, beading and portraiture, forming a sense of cohesion all on its own. While Rodney works with mixed media and says his philosophy is, “To get the medium to do the work for you.” By this he means that he allows his own discipline and technique to be present alongside the medium’s own presence, which creates an impact of its own. “I submit to the medium as much as it submits to me,” he says, “and this brings something unique to the work and a synergy that wouldn’t happen if you could just control the medium.”

Don’t miss this fantastic exhibition on display till April 8th. To thank her supportive customers, Robin will also be hosting an open house at the gallery each Sunday from 2pm until April 7th. 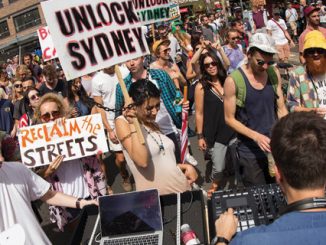