Yoga, pilates, yogalates – we’ve done it all before. For those of you who are tired of deep breathing in downward dog pose and are ready for a tough new challenge, check out the show that’s transforming everyday people into fighting fit warriors with a little help from local trainer, Rachel Guy.

Health and fitness is big business in the media and across the Inner West with weight loss and dieting a constant topic of discussion, and gyms popping up everywhere from Five Dock to Camperdown. But a new craze is rising in the world of sports led by the television show ‘Wimp 2 Warrior’ (W2W) – and it’s got people donning gloves and punching bags.

The show, which has just wrapped filming on its second season, is described as the “ultimate human experiment,” where the audience watches as ordinary guys and girls that have never trained before are turned into tough-as-nails Mixed Martial Arts (MMA) fighters. “It’s a reality television show that’s a cross between The Ultimate Fighter series and The Biggest Loser,” says the W2W Head Strength Coach, Rachel Guy.

A trainer from Wareemba, Rachel is the Inner West’s answer to Michelle Bridges and helps the show’s ‘wimps’ get to the fittest they’ve ever been in preparation for stepping into the cage with her “tough love and zero bullshit” approach to training.

While many people are sceptical about the validity of reality television shows, Rachel believes that programs like The Biggest Loser and W2W play a part in helping people achieve their health and fitness goals. “The type of contestants we have on the show tend to be two sorts. The first type is those who are already life achievers; perfectionists who just want a really big challenge. And then you have those who are basically looking for some help and to get their confidence back,” she says.

It’s the latter who really benefit from the extra motivation W2W can offer, although it’s not just the participants whose lives can potentially be changed; it could be argued that these kinds of shows are inspirational for the audience watching at home more than anyone else – those who are spurred to take action after seeing the success of other regular people.

“The shows have such an infectious energy,” says Rachel, so much so that there are already over 600 applicants volunteering to get involved in next W2W series.

This level of interest is evidence of MMA’s current status as the world’s fastest growing sport and emerging popularity in the mainstream. “I believe W2W is showing the general population that anyone can do it,” says Rachel, “The perception is that MMA is a brutal aggressive sport, but that couldn’t be further from the truth. Every mixed martial artist I’ve ever met has been totally respectful, kind and gentle. They have a lot of respect for each other, which is more than you can say for a lot of soccer players.”

As the only female coach on the show however, you have to wonder exactly how female-friendly the sport really is?

As a female in a male-dominated sport, Rachel admits you have to be very good at what you do and embrace your tomboy side, but she believes more female fighters and coaches will be up and coming soon. “I think MMA is fantastic for women; it’s really good for fitness and excellent for fat loss, but I think most women are afraid of it because they think they need to get punched in the face,” she says. “When you train you realise that’s not true, MMA is a very technical sport. It’s also excellent for self defence and lots of fun.”

Whatever path you choose on the journey to improving your health, having fun while getting fit seems to be the key motivating factor, which explains why most people prefer to train with a partner or social group rather than alone, and also the popularity of dance-based group exercise classes like Zumba, Bokwa and pole dancing.

According to Rachel, functional type training – which involves activities such as flipping tyres, playing with ropes and throwing medicine balls around – is very trendy right now.

However, on the other side of things, there’s been a spike in interest around ‘Physie’ which is like a dance aerobics that combines elements of ballet, jazz, contemporary, pilates and even hip-hop to improve strength, flexibility, fitness, co-ordination and balance. “I’m pleased to see weight training for women is on the rise too,” Rachel adds.

“A lot of women are led to believe they have to do an hour or two of cardio a day to achieve optimum fat loss results, but weight training is actually better for fat loss and body composition when combined with high intensity cardio such as boxing, kick boxing and sprinting.”

Regardless of your chosen sport, during the colder months Rachel suggests you have a plan that you can commit to and a support network to help you stay focused on your fitness throughout winter. In terms of motivation, it’s important to surround yourself with like- minded people – even if they are contestants on a reality television show.

• For more information about Rachel Guy and Wimp 2 Warrior, visit athleticfox.com or wimp2warrior.com.au

Where to work out in the Inner West

The Inner West’s most health-conscious residents are lucky to have free access to a number of great outdoor exercise facilities. Here are a few of the best workout stations to sweat off the winter chill and enjoy some sun…

King George Park, Rozelle
The location of this issue’s cover shoot, King George Park is like an outdoor gym with a million-dollar view. One of a couple of workout spots along the Bay Run, it has an instructional board with suggested exercises and plenty of parking. However, it could be improved by some padded ground rather than bark.

Wentworth Park, Glebe
Wentworth Park is ideal for doing circuit-type sprints and workouts with exercise stations scattered around the perimeter of the huge park. It’s often bustling with fitness groups or classes and is a great place to meet other sporty types.

Leichhardt Park, Lilyfield
Leichhardt Park is home to a fabulous workout station designed especially for seniors. It’s clean, well-maintained and includes equipment pieces to achieve a full range of movement. This area is meant for general public only (no commercial fitness training permitted on the equipment).

Art month special: LOST and MOST 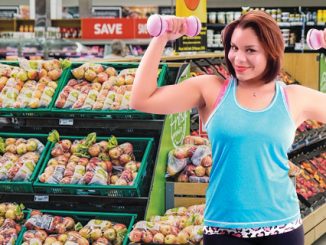