• On the move: Look out for the new Cincotta chemist, which has just moved over to Norton Plaza where Amcal used to be. What’s with all the chemists in Leichhardt anyway? They are almost as popular as Thai massage places…

• Can you guess which Leichhardt florist has a reputation for being ‘difficult’ to work with? Apparently they go through staff like toilet paper and it’s well-known in the industry. You’d never tell from the sweet smelling shop what stink lies beneath.

• Farewell to Atelier restaurant in Glebe, which is closing after a decade in the food biz. It will be sad to see such a great establishment close its doors.

• A new artisan gelato shop is coming to Rozelle and locals couldn’t be happier. Since Gelatissimo closed down in Balmain a few years ago residents have been craving another ice cream fix.

• Does anyone know what’s happened to Sulfaro in Haberfield? It’s a little early to be closing for the Christmas holidays but the blinds have been drawn and the doors are locked. We’ve heard whispers that they’ve gone out of business but who knows… Meanwhile, if the rumours are true, we’ll be missing their spinach and ricotta arancini – they make the best in Haberfield. Sob.

• Also in Haberfield, police were spied breaking up a rather rambunctious house party on a quiet residential street last month where one drunken partygoer was overheard demanding that the policeman “Call the commissioner!” Some people just don’t know what’s good for them.

• Spotted: who is the ‘cheeky’ girl gardening in just a top with no underwear on in her Leichhardt frontyard? Apparently she’s been taking drivers by surprise, nearly causing accidents (and probably a few heart attacks too), and it’s not even pants-off Friday!

Prudence – hot or not? 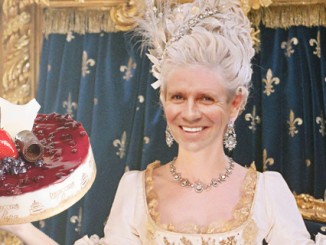