• The facade of a former brothel fronting on to Enmore Road has been defaced by troglodytic graffiti involving, you guessed it, many phalluses, followed by the captions ‘I love dick’ – letting down the general standard of street art in Newtown and Enmore significantly. The comments from clients on Penny 77’s website tellingly show much more respect for the women working there than the unknown street ‘artists’.

•  Pubs changing hands. Recent sales include the leasehold interests of the Newington Hotel and the freehold of the White Cockatoo, Petersham

•  MC Darby (daytime name: Member of Council Darcy Byrne) has been spitting off some rad press releases of late, backing up big name BFF’s in the music biz and confirming Laneway Festival as a permanent fixture at Callan Park.

• Leichhardt Council has successfully pushed Urban Growth NSW to publicly release their taskforce report on the Bays Precinct Renewal. Previously confidential and now to be officially unveiled at an invite-only conference, the report outlines major recommendations to retain shipping to the harbour, redevelop White Bay Power Station and Rozelle Rail Yard, as well provide further transport link-ups with the future extension of the M4. Leichhardt Council has not been named
a partner organisation despite 70 per cent of the area concerned falling in Leichhardt LGA.

• Denied entry to the G20 by the Libs, popular local MP Tanya Plibersek defiantly lived it up at this week’s other great diplomatic gathering, the Glebe Street Fair! The event was a massive hit and illustrated that every summit should have at least three stages, with no politicians talking on any of them. 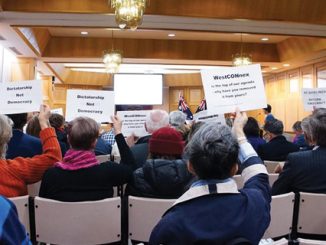