• Former Ciao cover girl and erstwhile Leichhardt Labor Councillor Lyndal Howison is entering the election race for John Howard’s ex-seat, Bennelong. Lyndal was a young single mother when she was on Leichhardt Council from 2008-2012, and agreed to be interviewed for our 2010 Mother’s Day edition. Having moved out of the Grayndler area, Lyndal is now contesting blue-ribbon Liberal territory (currently held by former tennis star John Alexander). But maybe she is hoping to pull off an election win a la Maxine McKew, who famously ousted Prime Minister John Howard from the seat in 2007.

• Perhaps one of Five Dock’s most underrated specialty stores has all but disappeared under the overlaying traffic and chaos of Lyons Road. Brinlay Paints, on the corner of Lyons Rd and Ingham Ave, closed abruptly a few weeks ago with the date ‘10/6/2016’ spraypainted all over the store’s boarded-up exterior. The store offered a wide range of decorating products to Five Dock’s aspirational (now thoroughly gentrified) DIY renovators. Positioned on a highly visible corner with plenty of residential parking, we can only imagine what will come in its place. Perhaps a café, restaurant or beige block of luxury apartments?

• Ciao has been exposed to an interesting election campaign tactic to undermine an opposing candidate’s campaign. A person who claimed to be the campaign manager for a local candidate presented himself as a suitor for our newspaper’s publicity but several phone calls and emails later we realised he was in fact an imposter. The real manager told us that this is a tactic used by both a candidate’s enemies – to damage the candidate’s reputation with time-poor journos, and a habit of fans – who are so enamoured with candidates they are happy to do some (fantasy) hack work on the side! 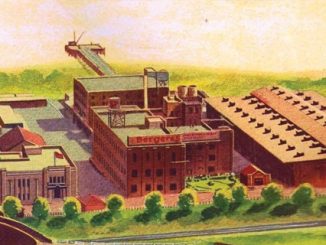