I remember a few years ago eating the most disgusting and foul thing I’ve ever eaten in my life. Ever.

It was a pecorino that had been stored in a small terracotta pot that was covered in olive oil, then buried until it had become absolutely rotten. The smell burned my eyes and the taste cut into my lungs! BUT the old Italian blokes who were showing me this delicacy were rolling their eyes in gastronomic delight. In any other situation I would have chucked this stuff in the bin and probably called a priest to perform an exorcism!

I learned two lessons that day:
1. I do not like eating rancid pecorino.
2. We waste a lot of food due to a lack of understanding and knowledge, not because it is actually bad.

Recently I was invited to cook for a group of gastronomes at a biannual symposium of gastronomy. They had just finished a discussion about feeding the underprivileged and the food I cooked for them was all rubbish!

I used irregular shaped eggs that my egg supplier could not sell, spent buttermilk that was diverted from the drain, day-old bread from the baker’s pile destined for landfill. I walked into a green grocer and asked for the dark green leaves that they discard from iceberg lettuce, and while I was there liberated some dodgy looking bay destined for the bin, the list goes on. The only things that I used that were not considered rubbish was a few onions, salt and pepper.

The dish comprised of slow-cooked eggs, baked onions in a buttermilk jam topped with crumbs and green dressing – it was a delicious dish (even though I do say so myself). I gave a talk as they were eating their dish and there were a few that paused mid mouthful when I told them they were eating rubbish but they ate it anyway. You see I’d changed their perception; what was once considered to be waste magically changed into something tasty and nutritious.

This is important because we waste too much food that doesn’t sit into our normal frame of acceptance because we ‘think’ it is bad! Luckily there are a number of resources around to teach us about the hidden beauty of our rubbish….

Check out: www.foodwise.com.au/category/food-waste-toolkit for more information. 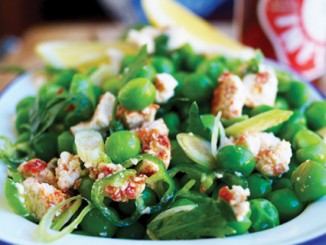