This teenage buddy movie screened at the Sydney Film Festival. Why?

The end-of-high-school romp, where the kids go wild/take drugs/drink themselves senseless/have sex and yet still learn something really significant about life is a tired old genre. By now we’re so thoroughly familiar with its every trope that a real talent for originality is required to mine anything fresh out of the idea. Which is what Booksmart, by reversing the usual gender roles, promises… And at least in the eyes of most critics, it succeeds – they’ve certified it 97% fresh on Rotten Tomatoes where you’ll find 28 pages of rapturous reviews. Even the normally sensible David Stratton (hardly in the demographic for teen sex comedies) gave it a generous 4 stars.

But this is no Lady Bird, a movie which did have something original and funny to say about this transitionary period in a young woman’s life – not by a long shot. What seems to impress everyone is not just the gender flip, but that one of two girls Amy, (Kaitlyn Dever) is lesbian. That’s an inspired piece of zeitgeisty scripting – and it secured director Olivia Wilde’s otherwise derivative comedy a late-addition place at the Sydney Film Festival. Well, it must have been that, I really can’t think of any other reason for its inclusion… Amy and her bestie Molly (Beanie Feldstein) are not lovers though, just friends and also the school swots – stand-offish over-achievers – no one’s going to invite them to the big end-of-term party. They don’t mind – after all they’re destined for Ivy League colleges and stellar careers. Molly’s hero is Ruth Bader Ginsberg, and her ambition is to be the youngest female Supreme Court judge in history. But then she learns that the “cool kids” they’ve snobbishly looked down are also high scorers heading in the same direction. The hard-partying school mole is off to Yale, while the stoner guy has landed a 6-figure job coding for Google. Damn, and Molly and Amy have missed out on all the debauched fun… Oh well, nothing that one last wild night on the tiles won’t fix. Go girls…

They do have a few amusing misadventures trying to find the right party. They’re dosed with a powerful psychotropic drug without their knowledge or consent (always good for a laugh), but apart from providing one of the weirdest and lamest trip sequences ever put on film, nothing much comes of that. They recover as quick as the plot demands and since this is a Hollywood girl-power comedy, there has to be a big body fluid joke (poo in Bridesmaids, pee in Girls Trip, menstrual blood in Superbad). Here it’s the projectile vomit Amy sprays just as she’s about to score her heart’s desire – going down on a pretty girl (Diana Silvers) with supermodel good looks called Hope (yes, really, it’s that obvious) on the bathroom floor… I shouldn’t have spoiled that, it’s supposed to be one of the big climatic scenes. But hey – there are no less than four credited writers (all female) on Booksmart. Couldn’t one of them have come up with something a bit smarter than that? MA15+ from July 11. Inner west cinemas include Palace Norton St, Central, Broadway, Burwood and Dendy Newtown ★★1/2

It’s pronounced Stoober, rhymes with Uber (for reasons which quickly become obvious) and it’s been widely described as one big ad for the ride sharing app. I don’t know if the tech giant did pump money into director Michael Dowse’s action-comedy romp, which pairs Dave Bautista as a grizzled hyper-masculine LAPT cop with Kumail Nanjiani (The Big Sick) as a mild-mannered super polite Uber driver. But it sounds like it, and if so – they spectacularly blew their loot. Not because it’s a bad movie, far from it – it’s actually a whole lot of fun – but because it central message so subversively and succinctly sums up exactly what’s wrong with that company – without having a clue about what it’s doing.

It goes like this – Detective Vic (Bautista), who we first meet sharing a joke about his own daughter (Natalie Morales) having anal sex (what a guy!) is hot on the heels of a very bad dude (Iwo Uwais) – a drug dealer “who sells heroin to kids!” (so that means he’s Latino, of course he is). But big Vic just had laser eye surgery, and temporally can’t see too well. So he ends up hailing Stu (Nanjiani) and his Uber (a small all-electric Nissan he has on lease) to career around LA in hot pursuit of a whole bunch violent thugs with more explosive fire power and muscle at their disposal than a small army. Hilarity and high-jinks ensue – and despite it’s dubious tone and very shaky premise – most of the jokes do land where they should. They vary from broad physical slapstick to Stu’s genuinely witty deadpan – and (maybe unexpectedly), you will have a pretty good time with this one…

But here’s the thing: Stu goes along with such an insane and life-threatening enterprise because he’s worried about his star rating, already perilously low. Otherwise his “employer” (no of course, they’re not that – Uber drivers work for themselves!) will summarily dump him, and he’ll be forced back to the lowly day job in a discount sporting goods shop that he hates. Yeah, that’s the accurate, utterly demeaning, powerless reality for the company’s drivers – the very people it depends on to make the whole thing work. Without them Uber is just a bunch of coloured pixels on your phone. Those drivers have no rights, no recourse, and simply have to put up with anything and everything to make their Silicon Valley overlords billionaires – from being shot at to being splattered with stinking dog food. Even spend an entire shift with a  loose-cannon cop who can joke about his daughter’s sex-life. MA15+ from July 11. No inner west art-house release for this one (What? No lesbians?) – you’ll have to head to Event George St ★★★1/2

Hail Satan? is getting an exclusive run at Dendy Newtown. It’s about the Satanic Temple, one of the most colourful and controversial religious movements in American history, and The New York Times describes it as “a must see.” Reptiles with big teeth are also running amok in  Crawl, on at Dendy too and Palace Central. Both movies not previewed. 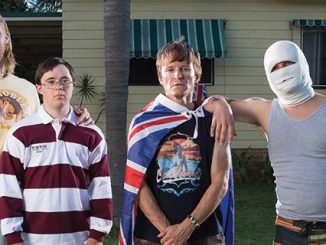 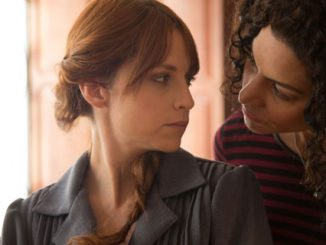 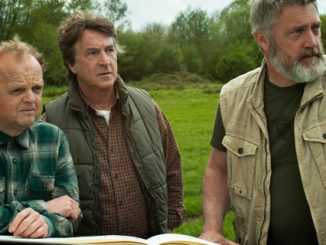