Two movies about women in the workplace open this week. One of them is a complete fraud.

A marketing spruik for a “sparkling girls’ night out” from one of our leading arthouse cinema chains arrived in my inbox last week: “Join us for a special preview, it said, of the empowering Hustlers (my emphasis, it’s actually a movie about women being paid to perform degrading sex acts), a critically acclaimed (bizarrely it does have an 88% Tomatoes score) and extraordinarily entertaining (trashy, flashy and instantly forgettable) heist-caper with depth and intelligence that elevates it above its genre (no, not a patch on the recent Widows). A dazzling and vibrant feminist drama (my emphasis again – the girls drug men and steal their money, but they’re entitled white men – so they deserve it) with fully realised (I think that means several ethnicities) female characters, starring Jennifer Lopez in the performance of her career (she’s a mediocre performer at best), marking her as a top contender (let’s see what Meryl thinks about that) for the upcoming awards” (if she wins anything for this I’ll eat my iPhone).

Ok, so I didn’t think much of Lorene Scafaria’s exploitative piece of vengeful misandrist feminism which glorifies the exploits of a bunch of greedy women, their tawdry career aspirations and their even tackier tastes (fur coats, ostentatious jewellery and big black SUVs). Though without a doubt, mine will be a minority opinion – in fact the local copycat reviews are already coming in, echoing the overseas blather about female agency and economic equality. The movie is loosely based on a factual 2015 New York magazine article, and it lays out the heartless schemes run by a group of NYC strippers led by Ramona (Jennifer Lopez), Destiny (Constance Wu), Mercedes (Keke Palmer), Annabelle (Lili Reinhart) and Diamond (the rapper Cardi B), who become drug dealers, thieves and extortionists of Wall Street businessmen. They do this because (get this), they had to on account of the 2008 financial crisis…

J-Lo (who turned 50 last July) does look pretty good swirling round a pole with hardly any clothes on, though for those who do go along with their empowered feminist partners hoping for some naked flesh to ogle, relax, what you’ll see is very tame – and unrealistically so for the type of establishment the girls work in. Frightened about alienating its target audience, it also glosses over the exact nature of the sexual acts they have to perform on their Johns in strip club backrooms too. But needless to say, all the thinly-drawn males in the movie are either creeps or pathetic, usually both. The cops are sleazy and sexist too, though they do eventually track down the scheming fraudsters. That’s no spoiler – it’s signalled right at the beginning by Destiny’s voice-over narration that things don’t turn out as intended for our heroes. She’s the one character who at least does express some misgivings and remorse about what they’re doing, but honestly, the Crazy Rich Asians breakout star is also rather dull here.

If Hustlers was an indictment of the lack of employment options for unskilled women, a cautionary tale or even a satire of grasping ugly materialism then it would have some merit. But as its publicity material and many key scenes demonstrate, its not, it’s a celebration. And look – as much as the next guy, I don’t necessarily mind watching girls wearing next to nothing for the good part of 110 minutes. But in this case I couldn’t wait till they were all dressed in neck to toe jump suits – like the ones the Orange is the New Black ladies wear. And without getting all whiney and weird about this – consider our (quite justifiable) loathing for any man who drugs a woman senseless with the intent of doing her harm. How can that deplorable act possibly be presented as “empowering,” even by the most cynical of PR publicists?

Yes I know their victims were well-paid white men, I get it… Enjoy that Prosecco, girls. But it may leave sour aftertaste. CTC from Oct 10. On wide release, including local inner west cinemas Palace Norton Street, Central and Dendy Newtown ★

Though it has had uniformly better reviews (97% on Tomatoes) and is way more deserving of feminist applause than the disreputable Hustlers, this Israeli film that effectively navigates workplace sexual harassment and it’s complexities is getting a disgracefully small limited release. In Sydney it’s on at one screen only, Palace Central whereas there trashy Hustlers (above) is on everywhere and being massively promoted on the expectation it will go gang-busters. So what does that say about us?

Working Woman is a gripping psychological thriller by doco maker Michal Aviad, who in her first fictional feature displays a dramatic narrative flair in telling the claustrophobic tale of Orna, a young woman (Liron Ben-Shlush) who lands a job in a real estate developers office selling upmarket apartments to rich French retirees. Her older colleague is Benny (Menashe Noy), and for a while they work productively together, spending long hours preparing client pitches. But Benny’s lavish praise and mentoring becomes more and more predatory, leading to first an unwanted kiss, and later to the sort of excruciating dilemma that too many woman in the workforce know only too well. The trouble is Orna’s pay is supporting her husband Ofer’s (Oshri Cohen) budding restaurant venture, which is facing all sorts of obstacles. They also have three young children, so she decides to not to tell him, fearing that he may make her quit, or do something worse himself. But of course, this is the sort of situation that can never end well.

The two leads are excellent, and the big cathartic scenes are deeply engrossing. Orna and Benny’s dynamic together is completely convincing, even in one particularly cringe-worthy scene in a hotel room. Benny perfectly conveys that toxic sense of entitlement that many successful men are able to hide beneath a veneer of charm, but he’s fully-formed character, and not just a “type” served up just for us to boo and hiss at. The way it works out feels satisfying too, but realistic in a way that’s rare in this sort of “issue” film. Forget what Hollywood and their local flunkies are try and sell you, this is the real #MeToo film to raise your glasses to. CTC from Oct 10 at Palace Central. ★★★★

Worth a look: Gemini Man

At 51 Henry Brogan (Will Smith) is hardly pension-age, but he’s bored with being the world’s best sharp-shooter assassin. The opening scenes show him hitting his target travelling on a 265 kph fast train from a distance of at least a kilometre – so he is good! It’s his 72nd kill, and though still astonishingly buff, he figures it’s time to just go fishing or wander aimlessly down the aisles of Bunnings, or whatever else it is retired old codgers do with their empty days… All that comes to an abrupt halt when a rogue (are there any other type?) ex-CIA guy (Clive Owen), now some sort of privatised paramilitary profiteer, sends an assassin after him – an even more buff and super-lethal killer who just happens to be (wait for it) Henry’s much younger clone. His name is “Junior” (Smith again, plus a whole lot of CGI). Naturally that leads us to the point of this whole highly immersive high-tech exercise (its called 3D+ in HFR, a process that raises the digital projection ratio to 120 frames per second) – to allow us to watch Will Smith fight himself with incredible clarity.

If that sounds like a trivial objective for the formerly celebrated auteur Ang Lee (Crouching Tiger, Hidden Dragon, Brokeback Mountain), maybe it is… This is his second go at using HFR. His last one, Billy Lynn’s Long Halftime Walk underwhelmed audiences, perhaps because its politics weren’t sufficiently patriotic for the US multiplex. But ever since Life of Pi, he seems to have become obsessed with the nuts and bolts of cinematic tech. Besides, studios are actively interested in “the next best thing”. After 2009’s Avatar, the 3D box-office peaked at around 20% of all takings, but they’ve since fell to around 1%. Hollywood would like to turn those numbers around, and (not unrelated)– give exhibitors an excuse to charge higher admission prices.

Can Gemini Man do that? As a piece of popcorn entertainment, it’s perfectly fine – quite exciting in fact – especially the two Will’s incredible motorcycle chase through the streets of Cartagena (watch a clip of that here). But the fact that we can now damn such a genuinely thrilling romp with such faint praise just shows how high our expectations have been raised for this genre after all of Daniel Craig’s and (bless him) Tom Cruise’s truely superlative efforts. Smith isn’t in either man’s league. He’s amiable enough, sure, especially in the scenes with his leading lady (Mary Elizabeth Winstead), an attractive young agent who tags along for his adventures in several countries. But ever the gentlemen, their age 25-year age gap means Henry doesn’t even consider his options (action heroes once never had such scruples, but… times up!). The real problem here is that the super high definition and ultra-sharp action sequences combined with the CGI have the reverse of their intended effect, and make everything look a bit fake. It all feels too much like a super-realistic video game. Which wouldn’t matter so much, if only the script, characterisations and plotting of Gemini Man had been as sharp as all those pixels. CTC from Oct 10. Local cinemas include Palace Norton Street, Central and Dendy Newtown. Though if you’re going to see it, do consider a VMax ★★★

On limited release but well worth seeking out, this new Australian doco by Janine Hosking charts the rise and fall of the extraordinarily gifted Australian pianist Geoffrey Tozer, regarded by many as the finest of the 20th century. It’s wrapped around a re-enactment of the controversial eulogy Paul Keating delivered at the memorial service of the early child prodigy’s tragically premature death at age 54, by then a penniless alcoholic. The former PM eviscerated the “bitchiness and preferences” of the musical establishment” who he said, “should hang their heads in shame” for ignoring Tozer’s talents. The controversial speech made headlines at the time, and naturally provoked blowback. The film gradually unveils what really happened, which is somewhat more complicated, though no less fascinating, than Keating’s colourful and blinkered version. No surprise there… Also in the film (and on the trailer) is one of his blistering attacks in parliament defending the arts grants he directed his friend’s way. “Is it it any wonder,” he thunders at a typically smug Peter Costello and a sniggering Alexander Downer, “why the arts community hates you lot.” He was right about that bit! M from Oct 10. The film’s official website lists where its screening options (includes Dendy Opera Quays and Randwick Ritz) ★★★1/2

Timothée Chalamet plays Hal, the wayward prince and heir to the English throne who is crowned King Henry V after his tyrannical father dies. Now the young king must navigate palace politics, the war his father left behind, and the emotional strings of his past life. Directed by David Michôd, who co wrote it (with Joel Edgerton), this Netflix produced feature is on limited release at Dendy Newtown (Oct 11,12 and 13) and selected other cinemas prior to its streaming debut on Nov 1 (Not previewed). 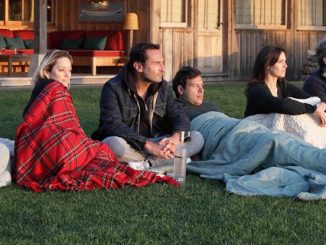 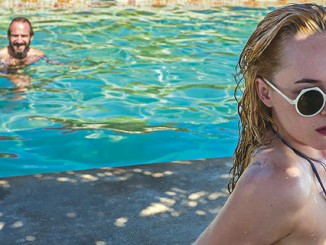