Two grizzled elderly white men with dubious pasts dominate our screens this week. One’s a certified genius, the other a redundant robot.

Even in Spain, you don’t often see pretty women washing sheets in local rivers while singing sweetly melodic folk songs, and (inevitably!) breaking into an impromptu flamingo. Nor do you usually see heroin represented as a drug that can unleash creativity and relaunch the career of one of Spain’s most beloved filmmakers. But then this an Pedro Almodóvar film – and never in the 70-year-old celebrated moviemaker’s long career, has he ever given us what we might expect to see. He’s had a few missteps (I’m So Excited) for sure, but his best films (Volver, Talk to Her) are as extravagant as they are intelligent, passionate, sensuous and colourful. He’s the master of the story within the story, the film within the film – and only in the very last frame of what could be his best work ever – does he finally reveal what he’s been up to in the (maybe?) autobiographical Pain and Glory. It’s a sensational scene, which left me almost giddy with delight. It even made we wonder about trying heroin myself. But only if a state pill tester would certify it “safe”, of course!

Not that Almodóvar is doing anything quite so literal with this film, or suggesting anything quite so stupid. Antonio Banderas plays the ageing filmmaker (or a version of him, here called Salvador Mallo), and the role is a gift (Banderas won Best Actor at Cannes for it). Salvador is a gay movie director who hasn’t worked in years, and he’s beset with various crippling physical ailments and drowning in self-pitying melancholy. But he’s rich and successful enough to live in comfort in a brilliantly colourful Madrid apartment (Almodóvar’s own), whose walls are adorned with gorgeous (and expensive-looking) impressionist works of art. After a chance meeting with an old actor friend, he decides to reunite with the star of one of his earliest and most successful films, Alberto (Asier Etxeandia), with whom he had a creative falling out and hasn’t spoken to in 30 years. (Banderas and Almodóvar haven’t worked together again for almost as long, hmm…). Alberto was using heroin then, still is, and before long the reunited pair are “chasing the dragon” together and (bizarrely), working collaboratively on a theatrical memoir of Salvador’s called “Addiction” about a former drug-using lover (the title really refers to his long all-consuming love of movies).

Each time Salvador uses and nods off, he dreamily reminisces about growing up in rural poverty with his beloved mother (Penelope Cruz). Back and forth we cruise, from the past to the present, wistfully and magically introducing boyhood memories of growing up, a sexual awakening, music, death, art and familial love. There isn’t a single second of this masterful memoir that’s wasted, and at just an hour and 53 minutes, this is one “slow” art film that could easily be said is just too short. At various times Salvador is also shown as narcissistic, careless of the feelings of others and selfish, so if it’s really is based on the directors’ own life, Almodóvar is being remarkable candid and self-critical. But one highlight stands out – a reunion in the present with an old lover that is just so aching lovely that I defy anyone not to swoon. By the time the film ends with the sort of surprise that in retrospect, seems inevitable (and I’m kicking myself that I didn’t see it coming), I was so entranced I just wanted it to continue forever.

Pain and Glory was my favourite film at this year’s Sydney Film Festival. It’s my first five stars for the year, and most likely 2019’s best. MA15+ from Nov 7 local cinemas include Palace Norton Street and (limited sessions) Dendy Newtown. ★★★★★

No less than three strong kick-ass women join forces with an ageing robot (Arnold Schwarzenegger) to save the world in this redundant sequel from Deadpool director Tim Miller – which conveniently ignores the baffling last three Terminator spin-offs. They were so forgettable and confusing that honestly I’m struggling to remember what happened in any of them… but this one redundant? Well, maybe not… Unless you haven’t been paying attention recently – you’d know that a #MeToo Terminator wasn’t only inevitable, but probably compulsory. Do you even need to ask why the character destined to save the world this time is a young woman of colour? No, of course you don’t… That bit of scripting and casting was compulsory too.

Within the first few minutes, we’re reintroduced to John Connor, Judgement Day’s boy saviour. He’s promptly killed off (while still about 14 years old) by a rogue Arnie-looking robot in front of his appalled mother Sarah (Linda Hamilton). Which may make you wonder – what about the future the older John brought about as adult rebellion leader, the one Sarah in an introductory voice-over has just reminded us did actually happen? Relax, this movie isn’t interested in the tricky logic of time-travelling or alternative futures – it’s real mission is simply a feminist makeover of T2 with pretty much the same plot. Which, to the no less than six males sitting on top of its creative credits, means three feisty gals who can fight ferociously while swearing at us as colourfully as a bunch of road-raging truckies who’ve taken too much speed.

One of them, Grace (MacKenzie Davis, the super nanny from Tully), is an “augmented” human warrior who naturally enough, arrives on earth from the future naked. Then there’s Sarah Connor (Hamilton), now grizzled and muscular. Apparently she’s spent the intervening years since T2 lifting weights, firing rocket launchers and (judging by that husky masculine growl) chain smoking. Last but not least there’s Dani (Birds of Prey’s Natalia Reyes), the Mexican working class hero Grace was sent to rescue so that she, like John Connor before her, can save the world. Given her destiny, she’s an oddly dull character, but then the times-they-have-been-a-changing… In T2 Sarah’s son was to be the chosen saviour. In T6 (or whatever this version is), no mere male (especially a white one) will save anything…

The new terminator sent to kill Grace, a Rev-9 model (Gabriel Luna) is indestructible but boring. In fact until Arnie turns up around the mid point, none of the men do anything much, or even have a single intelligible line of dialogue. He’s called “Carl” now and still a T-800 robot, but aged and grey like a human (wow, just think of the lines of coding!) Since completing his T2 mission and killing John Connor he’s made himself useful as a curtain salesman and house husband. “I’m reliable, I’m a very good listener, and I’m extremely funny,” he deadpans to Sarah, who naturally can’t believe the monster that slaughtered her son really runs a drapery business. “I change diapers too,” he adds, convincing us of something, at least… Arnie has fun with the role and effortlessly reminds us that he’s the Republican politician who really should be in the White House – not its present disreputable occupant. But sadly, that whimsical notion is about all this unnecessary sequel ever achieves.  MA15+ on now, everywhere including (sigh) at your local arthouse. ★★

There’s quite a lot else around this week, too much for me to catch up with after being away… Though if your tastes extend to sadistic mutilation, bone-crunching action and blood-gushing ultra-violence, you can safely head to Dendy Newtown for The Furies in the comfortable knowledge that what you are watching is genuinely (unlike Terminator: Dark Fate above), “female driven”. Set in the Lake George area near Canberra, it’s opening scene is framed by a piece of graffiti which tells us to “Fuck the Patriarchy.” And Tony D’Aquino‘s low budget revenge thriller, while staying relentlessly on topic, never gets more subtle than that. Actually it gets sillier (“…it’s a fucked-up world full of fucked-up men,”– that’s an actual line of dialogue spoken by Airlie Dodds, centre above, who hopefully will never have to put this role on her reel) as it gets nastier – gleefully revelling in its extreme gore, including (in just one scene of many similar) someone’s entire face being sliced off. But, yeah, ugh – men are creeps, I get it… Meanwhile, the stars above have all been invited on the panel of ABC’s Q&A next Monday where they’ll discuss the topic, “When violence against men is justified” (yes I’m joking – but through gritted teeth). R18+ also on at Burwood (no stars). 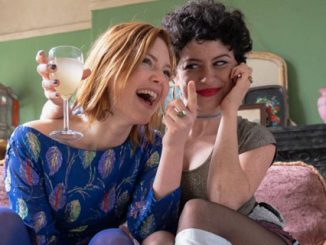