Red curtains. Titty tassels. A chain dangling from the ceiling. And an audience self-consciously craning to see which ‘Jaded Vanity’ graces our presence next. It’s my first burlesque show, enjoyed on a Sunday night in the quieter end of Newtown, and sure, some elements of tonight’s performance fit my expectations exactly. Not in the least that my boggle-eyed guest seems to be quite enjoying himself. Then again, so am I.

However, there have been many more oddities occurring tonight that I didn’t expect, such as the first act: an eye-popping twerk performed in a fluoro morph suit by a dancer deceptively named ‘Flora.’ Or the second, where an undulating creature with a helmet and tree-branch fingers made the whole theatre drool, with no conscionable reason as to why. Even when it gets to the final routine, in which three women make putting on clothes look much hotter than getting naked could ever be, I still don’t suspect something is awry.

It’s only when the audience is led in to a chorus of, “The ladies bras, the ladies bras, the ladies knickers and the ladies bras…” and we are the ones shaking our booties and childishly pointing to our own ‘bits’ that I realise the joke is on us. This burlesque show isn’t about the shame of being sexy, it’s about the exact opposite; the fun, mysteriousness and power of it…and I’m not at all surprised to find such a performance at the Vanguard in the Inner West, which has carved out a reputation as a Sydney’s sexiest region.

Indeed, if the litmus strip that is Parramatta Road is anything to go by Inner Westies’ attitude to sex is undergoing an overhaul. On my daily ride up the vena cava of Sydney I now spot pole-dancing studios, the forthright signage of Stiletto, raunchy boutiques and venues proudly welcoming clients of diverse sexualities and desires – it  seems the old dichotomy of wedding dress shops and back-alley parlours has finally come unstuck.

Looking around the plush interior of the Vanguard I see guys and girls in equal numbers; girlfriends, boyfriends, raucous groups of workmates and family, as well as an older couple trying out some moves of their own. In front of me, two women are coyly discussing their love life while polishing off a Crème Brulee, “We live locally and we were curious to see what the show would be like…It’s a bit wacky, but by God, it’s hot.”

It’s no secret: tease has taken off in Inner West streets. During the last weekend alone Australia’s biggest rock n’ roll burlesque event, Black Cherry, hit Marrickville’s Factory Theatre, Unicorns – a queer burlesque party popped-up in St Peters, and the Vanguard’s Jaded Vanities will be performing every Sunday until September. It seems us Inner Westies aren’t keen to leave it up to the pros either.

After touring the world as a pole and cabaret dancer, Jamilla Deville, Miss Pole Dance Australia 2005, settled in Annandale to set up her self-named pole dance academy. “I love the Inner West for its colourful characters and easygoing attitude; as well as the awesome diversity of women I get to teach because of my location; professionals, mums, students. Women from the Inner West are are open-minded and fun, which helps them learn faster.”

Deville has also enjoyed seeing the progression of her students, not only in skill, but in attitude. “The word ‘empowerment’ is thrown around a lot in this industry, but I see pole-dancing revealing strength and confidence to women they never knew they had,” she says.

Lucas has not found it difficult to incorporate his work with other aspects of his life, although he keeps his family in the dark about his after-hours activities. “All of my work colleagues and friends know what I do. Vicky and I are pretty sensual, outgoing people so I feel like BiSensual Massage is a natural extension of who we are.”

Furthermore, Lucas believes that communities that are sex-positive contain happier people, saying “We have been brought up to believe sex is a gratification separate from everything else. In reality it’s tied up with our emotional and physical well being. As well as the health of our relationships.”

Jacqueline Hellyer, a world-renowned sex therapist who operates her clinic in Rozelle, agrees, “While Inner Westies tend to be more educated, society in general still has to be much more open about sex. Although we have ‘reproductive’ education, we don’t have sex education and for that reason I spend a lot of my time simply providing information to my clients. Too often sex is portrayed as being all about the orgasm. Sex is actually a reflection of everything that comes before the orgasm, everything that comes before even entering the bedroom.”

If that’s the case, then my evening spent enjoying crème brûlée, G+Ts and a bewitching performance on stage must be off to a pretty good start. 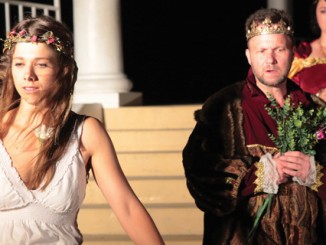