Ron Howard (Apollo 13) has made some pretty good films in his long career, and this may be his best ever. Rush portrays the exhilarating true story of one of the greatest rivals Formula 1 racing has ever witnessed – James Hunt versus Niki Lauda (and their racing teams, McLaren versus Ferrari).

Hunt (Chris Hemsworth) was rich and charismatic, a legendary “pantsman” – the polar opposite of his reserved and methodical opponent, Austrian-born Lauda (Daniel Brühl). They competed ferociously against each other – most dramatically in 1976, when Lauda although critically injured and disfigured in a crash, fought heroically to make a comeback.

It’s both a wild ride and a fabulously stylish drama, and rest assured, you don’t have to be into cars. This is all about sex, speed and danger – a point made very clear as we cut away from hunky Hunt pounding away with an air hostess (after just one suggestive glance – what a legend!) to the thrusting pistons of a racing car. Subtle, huh!

* Thanks to Hopscotch Films we have 5 double in-season passes to give away.
For details on how to enter see our Giveaways page.

It takes a while to get what highly regarded Indie filmmaker Sarah Polley (Take This Waltz) is up to here. She doesn’t give us many clues, we’re merely introduced to several characters – all of whom she is filming while teasing out details of their past. It turns out they are her family, her adult siblings and father, Michael Polley, plus some old family friends.

Sarah, the youngest by a long shot, wants to find out more about her mother Dianne, an actor who died when she was 11. Depending on who’s asked, Dianne was either “vivacious” or just a bit “too restless.” But who actually was Sarah’s father? The truth emerges eventually like a slow burn mystery. Sarah agonises over her motives; Michael jokes through his tears that Sarah must be some kind of sado-voyeur; and her three sisters’ reaction? Tellingly, they all get divorced…

But it’s not all pain, there’s compassion and redemption too in the telling of what, really, is not an uncommon family story. One rarely explored with such candour and skill though, and Polley throws us some deeply emotional sucker punches along the way.

* Thanks to Palace Films we have 10 double in-season passes to give away.
For details on how to enter see our Giveaways page.

Four pretty young things, bored with college drudgery, head for Florida for “Spring Break” where they team up with wanna-be gangster Alien (James Franco). Mayhem follows, for rest assured, “bad boy” Harmony Korine (Kids) has lost none of his ability to shock.

Anyone watching this just for arty sleaze won’t be disappointed, but Korine is about to smack those viewers in the mouth too, for he does have a serious point to make about our debauched, narcissistic times. The bright, hyper-fluoro sets dazzle, as does the pulsating soundtrack from Cliff Martinez (Drive), while the repetitive dialogue adds another layer to the gorgeous trippy vibe. There’s a lot to look at and think about in Spring Breakers. Like the AK-47s the girls end up carrying, it packs a powerful punch.

Please note: The rating warning means what it says.

* Thanks to Icon Home Entertainment we have 5 DVD copies to give away.
For details on how to enter see our Giveaways page.

One Direction: This Is Us

I should have guessed when the publicist smirked as she gave me the 3D glasses, as if to say, “You are in the wrong movie.” Now, I do (sort of) get billionaire boy bands. What I don’t understand is this lot, who as Morgan Spurlock’s (Super Size Me) uninquisitive doco makes clear, are nice lads who love their mums.

One Direction are young males, who after an adrenalin and testosterone-fuelled night in front of thousands of girls wetting themselves with excitement, end the night “larking about.” Together! Making fart jokes in the tour bus! Well, I would, wouldn’t you?

A movie with a strong anti-corporate message brought to us by Fox? Heh, why not – intelligent, gripping dramas with questioning left wing themes are rare, so thanks Zal Batmanglij, for putting one over Rupert.

Brit Marling stars as ex–FBI agent Sarah, a spy infiltrating an eco-terrorist cell called The East – a crusty bunch of anarchists whose criminal stunts cause fiscal mayhem in the name of justice. But Sarah starts to have “feelings” for their cultish leader Benji. Since he’s played by one of the world’s sexiest men, that’s understandable. Who wouldn’t dive into a dumpster with Alexander Skarsgård? 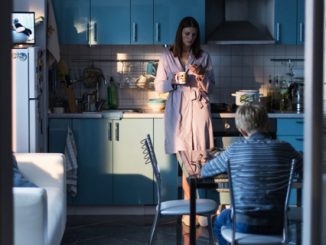