Terri Hooley was known as the “Godfather of Irish Punk” and his story is remarkably similar to that of Manchester’s Tony Wilson (24 Hour Party People). Both men were energetic, entrepreneurial and passionate about music – and both reckless, infuriating and crap at business. As played by Richard Dormer Hooley seems genial enough at first, growing up in the ’70s with a socialist dad amidst radicals and anarchists. But with The Troubles came violent extremism – “rebellion” no longer meant smoking dope and raving to music – but bombs and violent beatings. Belfast was a horrendously nasty city to live in, yet that did fuel a distinctively edgy punk scene. The unstoppable Hooley pumps all his savings and his foolishly supportive wife’s (Jodie Whittaker) into a record shop and then a dowdy strip club cum rock venue. Later a record label too – convinced that the punks would save the world! Errr… Yes, we now know they didn’t. But it is fun watching one true believer try.

★ Thanks to Curious Films we have 10 double in-season passes to give away.
See our Giveaways page for details on how to enter.

Brad Pitt turns up late in Steve McQueen’s wildly acclaimed, Oscar-winning drama, just in time to “do good”. Well, he’s one of the producers, so we can’t blame him picking a heroic role.

Of far more note are Chiwetel Ejiofor as the falsely enslaved Solomon Northup, who endured twelve years of torture and enslavement (and this is a true story) in Southern plantations after being drugged and tricked. Also hot rising star Michael Fassbender as one of the cotton farmers – his performance alone makes the smirking jokiness of Django Unchained look shamefully  misjudged.

This, we instinctively feel, was the brutal reality of the slave system in all its complexity and horror – people on both sides were dammed.

It’s an amazingly powerful film – don’t be put off by the harsh subject matter or think its “worthiness” might be all too much. For once the admirable intentions of everyone involved have produced a beautifully controlled and truly inspiring film.

★ Thanks to Icon Home Entertinment we have 5 DVDs to give away.
See our Giveaways page for details on how to enter.

The Face Of Love

So rarely do we see a middle-aged married couple happily in love, that we know instantly something will soon go terribly wrong. Nikki (Annette Bening) and Garret (Ed Harris) are celebrating a blissfully happy 30 years anniversary in Mexico – he’s so happy (actually off his nut on pot and tequila) that he drowns in the surf within the first 10 minutes.

So far, so bad… five years on Nikki, a prosperous LA real estate stylist is still in love and grieving. Out of the blue, she spots Tom (Harris again), the absolute clone of her husband in appearance and mannerisms at an art gallery, and naturally gets a bit obsessed. Did he really die? Is she mad?

She starts up a relationship with “Tom” which blooms, and then? Does this get creepy? Not really. Arie Posin’s script stays in safe (and soapy) territory. Though there are definite rewards for Cinema Club Gold-Card holders – as the two love-birds look absolutely fabulous.

Are all 60-year olds this sexy and well-preserved? Buff, actually… Hang on, that is creepy!

The tiny teapot kingdom of Monaco has always been a haven for tax dodging businesses – if Google or Apple had been around in the 60s, that’s where they would have set up. In 1961 French president Charles de Gaulle got fed up and announced a blockade, threatening to “send Monaco back to the Dark Ages” unless the mild-mannered bespectacled Prince Rainer (Tim Roth) handed over some of the tax loot.

In Olivier Dahan’s hagiography, that crisis unfolds as the Prince’s new wife, ex-actress Grace Kelly (Nicole Kidman) is unhappily trying to forget Hollywood and fit into a her new life by his side. Great melodramatic stuff, and rest assured, all the derision Brit publications like the ultra-paternalistic Guardian are hurling at her is just their usual snotty-nosed Aussie-bashing.

The script does lack subtlety, sure – but “Our Nic” proves she could be anyone’s queen. The French bully is no match for her… In fact if Nicole wants the crown in newly pro-monarchy Australia, she can have the gig anytime.

Judging by this, she’d be our Nelson Mandela, Ghandi, and Duchess of Cambridge all rolled into one. Long may she reign!

It’s THAT time of year ago again – when cinema-buffs get to spend two weeks in the dark. Ciao has been lucky enough to preview some, and found four little gems not to miss!

* Frank – Michael Fassbender fans won’t see much of him behind that bizarre mask, but everyone will love this dark and painfully honest parody of indie progressive rock.

* Boyhood – Filmed over 12 years, Richard Linklater follows the fortunes of a 7 year-old boy as he grows into a young man. Fantastic, and he turns out ok… Who wouldn’t with Ethan Hawke as your dad?

* Kumiko, the Treasure Hunter – A dose of real  SFF weirdness… Based on a true story, a disturbed Japanese girl (Rinko Kikuchi) searches for the stolen money buried in the snow at the end of Fargo.

* Eastern Boys – The director of cult TV series The Returned Robert Campillo raises more questions than he answers in this tough, deeply disturbing film about gay sex and illegal immigration in well-heeled Paris. 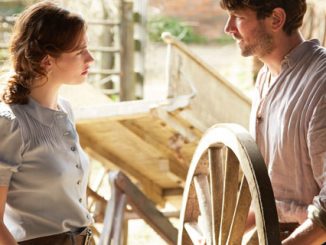