When Sarah Snook graced Ciao’s cover a couple of years ago, we knew she would one day be a star…

Now everyone agrees, even Variety called her performance in the Spierig Brothers time-travel saga an “extraordinary breakout performance.” That’s an understatement, she is simply a knockout, just incredible, way the best thing in what is already a fantastic movie, and more than a match for her long time Hollywood heavy hitter and co star, Ethan Hawke.

The story, like all time shifting sci-fi, tests all credibility and like Inception, the ending will make your head hurt. But in good way, and unlike that classic, this has real heart – which Snook’s character (known only as “John Doe”) provides. We first see him/her as a strange tough guy in a lowlife bar, and as soon as he/she starts to tell his story, “When I was a little girl….” we are rapt – gripped, enchanted and thrilled to the end.

In the 11 years Palace have hosted this festival, Israeli cinema has gone from strength to strength. That was very evident at Cannes this year, where several outstanding films from this year’s program were featured – including the Opening Night Selection Self Made from Camera D’Or winner Shira Geffen, the powerful and moving festival highlight Next To Her, as well as the intriguing drama The Kindergarten Teacher.

Never shy of controversy, Israeli film makers often confront audiences with challenging accounts of life in their troubled land. A personal favourite – Samen Zoabi’s Under The Same Skin in particular, shot in the West Bank and East Jerusalem and with actors from both Israel and Palestine, is both inspiring and deeply humanistic.

At Palace Norton Street and Palace Verona from Aug 24 to Sept 4.

★ Thanks to AICE and Palace Cinemas we have 5 double in-season passes to the festival to give away.
See our Giveaways page for details on how to enter.

John Slattery (Mad Men’s Roger Sterling) takes us about as far away from affluent Manhattan as it’s possible to get in his directorial debut – to a white, working class suburb of South Philadelphia.

Outside of The Wire’s Series 2, this is a world we rarely see on screen and the story is an adaption of an early Pete Dexter (The Paperboy) novel. Philip Seymour Hoffman gives his penultimate stellar performance as a crooked meat supplier – but now, the pain we see in his despairing face is almost too much to bear.

The story, blackly comic at times, concerns the death of his stepson, an odious jerk killed after racially abusing a co-worker. Christina Hendricks (Joan from Mad Men) plays his wife and John Turturro his crooked gambling buddy. Eddie Marsan gets a cameo as a tough guy while Richard Jenkins as a drunk columnist completes the all-star cast.

Fans of the hard-boiled and sardonic will lap it up, but was it just too tough for the big screen? Surprisingly, even with all that talent, it didn’t get a release here. Yes it’s dark, but damn impressive too, and thankfully, now available on DVD. MA15+

★ Thanks to Madman Home Entertainment we have 5 DVDs to give away.
See our Giveaways page for details on how to enter.

Rebel, rock star, anti-hero, junkie, bad dancer, genius, believer, doubter, storyteller, songwriter, icon, a man with a face only Dr Frankenstein could love – Nick Cave is now so revered that no one would be surprised if he was given a knighthood.

Co-written with Cave, Iain Forsyth and Jane Pollard’s slightly fictionalised day in his life is innovative, strange, brooding, insightful – and yes, does allow us into the great man’s head.

He tries to bullshit us, of course – he has a role to play! But that only makes us love him more.

That’s so true in one of the early scenes – Nick cultivating his aura, dressed as always in a neat dark suit, hunched over a typewriter in his studio (itself an art-director’s wet dream) ruminating on the “act of creation”. A cliché? No, he’s way, way above all that – who on this planet uses a typewriter?

Most of us have probably sat on a bus or train listening to someone talk on the phone (“I’m on the bus…” … Yes, I’ll get the pizza” ) wishing like hell they’d shut up… How about a whole movie of it? Though to be fair, Stephen Knight does give us better conversations to drop in on.

He’s set his entire ingeniously crafted 85-minute movie in a car and in real time. We’re with Ivan (Tom Hardy) driving his BMW at night, away from a high-powered job he’s just walked out on, on the phone (relax, hands-free) to alarmed colleagues and an extremely unhappy boss. And there’s more, he’s leaving his family too, breaking the news of an unknown infidelity to his distressed wife and family while on his way to be with the mother of his new child being born right now…

All this comes out in the first few minutes of Ivan’s trip, and just how the tension and our involvement in his emotional turmoil is racked up after that is a work of small genius. Yes, some of his priorities seem bizarre (why care about a job he’s left?) and a suitable climax is impossible given the economic restraints of the concept. But it’s still an intriguing, deeply satisfying experimental film.

What is it about these four gormless and clueless British twats that are so funny? But truth is, they are. Maybe that’s because the boys (men really– Simon Bird, Joe Thomas, James Buckley and Blake Harrison – average age 29) so fearlessly milk their excruciatingly bad taste gags in situations of such extreme personal humiliation – that it’s just impossible not to be impressed.

In the last movie they went to Crete for “sun, sea, sex, sand, booze, sex, minge, fanny, and tits. And booze. And sex” only to encounter a cascade self-inflicted pain and social failure so gross that it was almost surreal. And No. 2 is much the same – with more body fluid jokes.

Of course there has to be, this time they’re in Oz, and we are being outrageously sent-up.

Though we hardly complain… All they’re doing is exactly what our own Bazza McKenzie did to the Brits in the 70s – pointing percy not at the porcelain, but us. Mind you, his off-colour jokes, trouser snakes and spectacular technicolour yawns now look positively genteel. You’ll get that after watching one of the lads hurtle down a Gold Coast theme park water slide hotly pursued by a substantial deposit of excrement – only to be literally (spoiler alert) – shit splattered.

Sorry, but you do have to know what to expect… 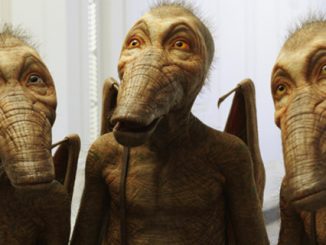 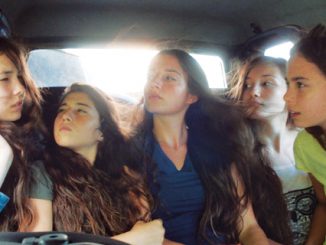