Ok, so after Charlie Hedbo we know that the subjects of journalistic satire don’t always get the joke. In his debut as a writer/director, US comedian Jon Stewart dramatizes one such case. On his The Daily Show just before Iran’s disputed 2009 presidential election, Maziar Bahari, a Western-based Iranian journo was flippantly introduced as a “spy” – mocking the jumpy Iranian authorities who see Western conspiracies everywhere. Bahari (Gael García Bernal) laughed, but Iranian security goons didn’t. Blindfolded and tortured in an isolated solitary confinement cell for 120 days, most of Stewart’s film follows the journo’s terrifying predicament as he oscillates between defiance and despair, and rarely has the relationship between prisoner and inquisitor (Kim Bodnia) been captured so powerfully. He’s supposed to confess to his role in the West’s capitalist media spy network – but how can he? He didn’t even work for Rupert! Note to our own local Murdoch-haters, that’s a joke. M from Feb 19.

★ Thanks to Transmission Films we have 10 double in season passes to give away. – See our Giveaways page for details and how to enter

The original starring James Caan was a moody masterpiece with a fatalistic streak of gritty nihilism, and Rupert Wyatt’s remake inevitably suffers in comparison. But few of us will ever be able unearth something made in 1974, and this version, which is stylish, earthy and viciously cynical too (that is – damn good!) muscles up well. And it gives Mark Wahlberg one of his best roles ever. He’s Jim Bennett a jaded English professor with a destructive gambling addiction so vast that he could fund the construction of James Packer’s Barangaroo tower in a single night on the tables. Despite a privileged background, he’s now in hock to some vicious hoods, whose tough, caustic and super articulate blather is as snarky and blackly entertaining as anything scripter William Monahan (The Departed) has served up before. John Goodman (bald and topless – help!) is literally a monster. Less convincing is Brie Larson, a firecracker in last year’s Short Term 12. But the fault is in the role she’s given – there’s just too much macho bluster for a femme fatale to compete. MA15+ on now.

Ciao wasn’t invited to the previews of Fifty Shades of Grey but we’re always welcome at anything about the world’s really sexiest man alive – Edward Snowden. Afterwards I erased my entire browser history, deleted all Facebook posts, emails, banking records and cut up my brand new Opal card. Not that it did any good, the metadata snoopers have already got it all. Laura Poitras’ doco has some amazingly revealing footage of Snowden the man, known previously only to her as a coded source, “citizenfour.” She was one of the three journos holed up in a Hong Kong hotel room with him as they managed, in a fraught and paranoid week, the publication of the leaks which explosively detail the extensive and illegal reach of our security agencies. But the scariest thing of all is left unexamined – how we willingly volunteered all that information. Why be shocked that someone decided to collect it? M from Feb 12.

The Theory of Everything

Stephen Hawkins has sold more un-read books than any man alive, and certainly has his fans. In the scene that earned the film its PG “mild themes” rating, an admiring nurse shows him some tame Penthouse pics, winking that “she knows what men are like.” Previously we’ve been told some organs in his useless body still function normally. All Eddie Redmayne has to do is blink – suggestively, but that’s not enough to sustain his “unusual” marriage to plucky Jane (Felicity Jones). With enough material for her own book (on which this mild-mannered bio is based), she’s off. PG on now.

What We Did On Our Holiday

Rosamund Pike is going to have to stop playing wives who behave badly, just as Billy Connolly really does have to quit being a wise old codger about to die. Both are in danger of being typecast, though as Abi, the Gone Girl star does nothing more outlandish than announce she’s had a leg-over with a man called Wallace and be a bit “mouthy.” Old Bill meanwhile gets to introduce her kids to the local lesbian, roll his eyes a lot and spout wise-old-codgerisms. Everyone, especially Abi’s up-tight estranged husband Doug (David Tennant) and pompous brother (Ben Miller) learns important life lessons. Writer/director Guy Jenkin and Andy Hamilton’s feel-good family comedy seems to have been made for Christmas Eve viewing, and on that level, it works pretty well. It looks sensational too. At one point Doug accuses Abi of working for the local tourist authority, and the movie could easily be a spruik for one too. The Scottish coastline looks stunning, I’m packing my bags for a holiday now! PG from Feb 12. 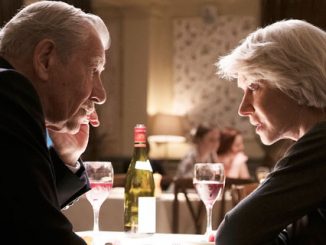