Australian movies regularly fail to register at the local box office, but there’s no such problem just across the Tasman. What do NZ filmmakers know that ours don’t? Lee Tamahori, here borrowing freely from the Western genre, has it worked out…

In his first film to be set in his native land since 1994’s Once Were Warriors, Mahana is the tale of a pair of warring Maori shearing clans in the 1960s. The Mahanas are ruled over by an autocratic bully (Temuera Morrison, also in Warriors). Teenage grandson Simeon (excellent newcomer Akuhata Keefe), spurred on by his feelings for a girl from the rival gang (the Poatas), rebels and the consequent fractures within the family lead to some explosive revelations about the past.

It’s quite a potboiler, a nostalgic, ripe melodrama set against the stunning green backdrop of rural NZ (as one reviewer wryly noted, “It could double as a feature-length travel advertisement”). So, is that a problem? Go along and check out a gorgeous looking movie that tells a highly relatable family saga audiences everywhere, not just locals, will respond to. Then book your flight – on Air New Zealand, of course!

Thanks to eOne Entertainment we have 5 double passes to give away. See our Giveaways page for details. 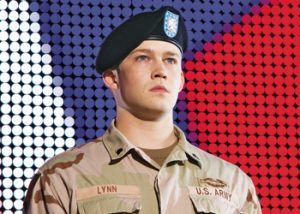 Ang Lee’s excellent new movie (technically and visually it’s awesome) covers just a day in the life of 19-year-old Billy (Joe Alwyn) and his “Bravo” squad while on a grotesque celebratory home tour in Texas, with flashbacks to a ferocious Iraqi street battle. He calls that “the worst day of my life”, and it labelled him a hero.

We’re used to seeing servicemen only as PTSD victims, so the big surprise here is how much Lee celebrates warrior culture and the very real love (and these hard men call it that) the soldiers feel for each other.

Vin Diesel plays a vaguely Buddhist captain who prepares Billy for combat by quoting from the Bhagavad Gita; Garrett Hedlund co-stars as his tough, mordantly cynical sergeant; while Kristen Stewart lights up every scene she’s in as his anti-war sister.

You’d be wrong to apply any political labels to this small masterpiece. Yes the tone is critical, but the best war movies defy easy categorisation. And this is one of the very best. 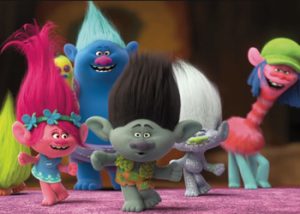 In a land not far away, two tribes live side by side. The Bergens are the ugly ones with hideous teeth and warts (we won’t call them “the deplorables,” no matter how much we want to). They’re grumpy, spiteful and mean – always look on the dark side and without a doubt voted for Trump. The Trolls come from somewhere more enlightened, some place where medical marijuana has been freely available for a very long time. They’re always happy – and sing, dance and party all day long, only stopping for the scheduled group hugs every hour.

So can these two live together? Silly question…

Dang, those clever DreamWorks folks are tricky, disguising brainy political allegory as a fun, trippy day-glow ride for tots. And it is fun – with brilliantly tactile animation and colours so intense your eyeballs will hurt. Justin Timberlake did the music and also stars as one of the Trolls, (as does Anna Kendrick); while the soundtrack contains just about every disco anthem and karaoke favourite you’ve ever belted your lungs out to.

As the long production credits roll (do stay – you’ll still be tapping your feet with an ear-to ear grin) you’ll notice most of the names are Indian. Yep, that’s where creative jobs are heading now. But Trump will bring them back, won’t he… 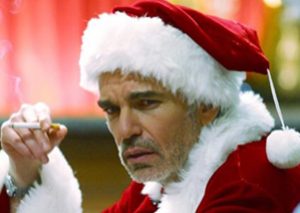 But the times have changed. Since the election of a “pussy grabbing” crooked developer as leader of the free world, isn’t a sequel a just bit superfluous? It feels flat too, in fact at the critics screening I sat through I didn’t hear a single chuckle – just awkward silence and one audible groan.

The plot is more or less a reprise of the original but includes a heist of a Christmas charity which director Mark Waters (Mean Girls) can’t be bothered getting us interested in, as well as a bunch of otherwise respected actors (Billy Bob Thornton, Kathy Bates, Tony Cox) being as vile as possible to each other. There is a market for this: And if you’ve always wanted to see Kathy Bates sit on the toilet, or dreamed of Mad Men’s Christina Hendricks in a filthy back ally on her knees next to a dumpster being rogered from behind by a vomit-stained unshaven drunk who is not Don Draper, then this is just your sort of entertainment. 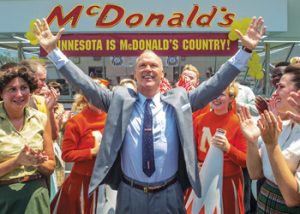 Ray Croc (Michael Keaton) was a likeable small time huckster who stumbled upon a great idea, and stole it. John Lee Hancock’s movie spins the yarn well, and takes its time to slam him for that. Not til the credits roll is the full extent of the Maccas chief’s douchebaggery revealed.

Mostly you’ll be on his side, but then, disgusted. But really, his business ethics were little different to that of other “visionary” capitalists with much better reps, Steve Jobs and Mark Zuckerberg for example.

That’s the way the system works in the US. Just look at who they elected president! 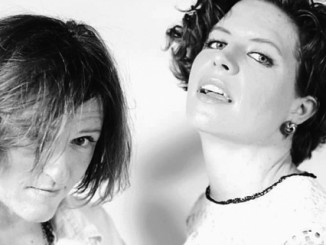