It is a proud fact that as Inner Western Sydney locals, we hold in our possession one of the world’s great fish markets. Each year, over 3 million people visit Sydney Fish Market in Pyrmont, from locals doing their weekly shop, to tourists from all over the world who jostle for fish and chips and selfies with pelicans.

It’s a vibrant sight, and one that we should take advantage of, while we still have it.

A couple of weeks ago, it was officially announced that the iconic fish Mecca that is Sydney Fish Market would be closing down to make way for a new $250 million iteration down the road in Blackwattle Bay. Set to open in 2020, this new and glittering addition to the Sydney landscape is an exciting prospect, but I have to admit that there’s a small part of me who will miss the terrible parking situation, slip-sliding around Claudio’s while trying to decide what to cook for dinner and in general, the faded and crumbling façade that has become such a familiar and much loved part of the Sydney landscape in the Inner West.

Over the years, I’ve attended cooking classes at Sydney Seafood School, partaken in more than one hungover yum cha session at Fisherman’s Wharf Restaurant, smashed smoked brisket at Vic’s Meats and bought more than my body weight in cheese and charcuterie from Blackwattle Deli. In this regard, Sydney Fish Market is so much more than just seafood, though it’s also an obvious celebration of all things harvested from beneath the waves. If you haven’t been for a while, might I suggest taking yourself down there in the next little while to reacquaint yourself with this old phoenix, before she rises anew. 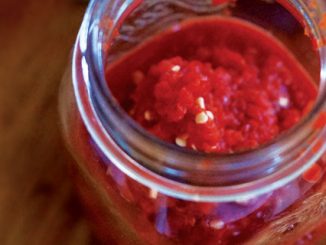 The Daddy of all Hot Sauces