As the Inner West gets its shake-on Brazilian style and immerses itself in all things soccer related, there is plenty going on behind the scenes as the world’s premier sport leads the way in sustainability and social change.

You may remember South Africa’s 2010 World Cup was the stage for the launch of ‘Soccket,’ a durable, airless ball that captures the kinetic energy of each kick by storing it in a coil that is eventually released when the ball is plugged into a socket. 30 minutes of play is enough for the ball to power up to 3 hours of LED light.

In Africa, this small amount of energy cleverly transferred into light helped thousands of children read in darkness, and also avoid the toxic fumes of kerosene lamps normally used for night reading.

The most obvious method of producing human kinetic energy to reduce fossil fuel use is through the peddling of a humble bicycle but there are lots more starting to turn up.

Engineers from Princeton are (timidly) claiming that human kinetic energy is the energy of the future. They have invented a chip that harnesses the natural energy of human body movement, until there’s enough energy in it to power a mobile phone or medical device such as a pacemaker.

The chip is the combination of rubber and ceramic nanoribbons, which when flexed generates electrical energy. Engineers have been able to transfer 80 percent of human mechanical energy into electrical energy. Seiko was one of the first ambassadors of kinetic energy. It introduced its first kinetic wristwatch in 1986 at the Basel World Fair. 30 years later kinetic energy is being used to power mp3 players; a person only needs to shake their body to power up the battery for an American kinetic mp3 player known as Shake.

While positioned as being useful in third-world countries where power is unavailable, perhaps a better marketing strategy would be pitching it to office executives who sit down for a long time  and consume electricity through their desktop machinery and then go on a treadmill and use up yet more electricity.

Other innovators have designed battery cells that capture the human energy at gyms. Exercise bikes and treadmills capture energy that can then feed into running the gym itself.

While this technology is still being trialled, engineers have recognised that human kinetic energy is a huge potential power source.

Now we just have to shake our butts so we can charge up our phone to call our local councillor and lobby for every local soccer ball to be a kinetic energy ball that can power up the lights on our local soccer fields.

For more info on the soccketball go to kickstart.com. 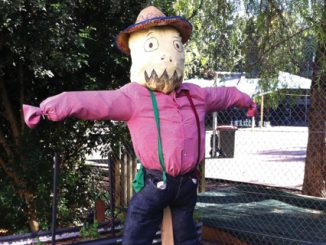 Fruit from the ‘hood is good