With no less than four 4 star movies opening this Thursday (Apr 13), how is it possible to nominate just one? Film-buffs will have to see them all – Colossal, Denial and Frantz, while  Oliver Assayas’ mystifying but wonderful psycho-thriller Personal Shopper gets the top nod because of the talents of the super smart and always fascinating Kristen Stewart. Is there any doubt now the star of Twilight isn’t one of the best young actresses in the business? Was there ever? Certainly not after her last pairing with Assayas (Clouds of Sils Maria). Actually, in my book – there never was. Miss this one at your peril. MA15+ Info and trailer here

We were pretty excited about this one last print issue, but don’t just take our word for it. Rolling Stone call it “ the slyest WTF rom-com in ages … (where) Anne Hathaway delivers a funny, fierce fully committed performance that demands to be seen.” She plays an out-of-work party girl fumbling towards some sort of redemption after she discovers that a giant lizard attacking Seoul is somehow related to her. Yep, it’s as weird as that sounds, and you’ll just have to see it yourself to believe it. Watch it with someone you love. More

Zach’s Ceremony is an extraordinary, feature-length documentary captured over ten years. It shows one boy’s journey to manhood in a complex, emotionally driven story that explores the fascinating and unique question of what it means to be a modern man belonging to the oldest living culture on earth. After screening at both the Melbourne International Film Festival and Sydney Film Festival in 2016 – it won the Audience Award for Best Documentary at both festivals. It also gained support from AFL legend Adam Goodes who said: “This film has the power to change Australian society.” The director Aaron Petersen and stars Zach and Alec Doomadgee will be along to talk about the film. Club prices. More

The Hollywood Reporter called Paco Leon’s festival opener Kiki, Love To Love “an upbeat, vibrant crowd-pleaser. Sexy, daring, transgressive and hilarious.” If that’s not enough to get you along, maybe the Freixenet cava before the premiere screening followed by an after party featuring Torres Wines, Stella Artois, catering by Ola Lola, and Pepa Molina’s Australian Flamenco live performance will be. Star of the film, festival guest Natalia de Molina will be at the gala too. Admission $55, Palace Club members $50. More

You do need to be a Herald subscriber for this exclusive special priced preview of Cate Shortland’s eagerly-awaited follow up to Lore and Somersault. This time she’s given us a gripping psychological thriller about a backpacking young Australian (Teresa Palmer) in Berlin who casually hooks up with a handsome and charismatic young German man – who locks her into his apartment, with no intention of letting her leave – ever. More here. Admission $12.50, seniors $9.50

April 21  Movie Club Previews: Get Out

There’s lots of buzz about for this American indie-thriller, about a young black man’s strange visit to his white girlfriend’s parents house. It’s both savagely funny and unexpectedly violent, combining a trenchant social critique with some thoroughly entertaining horror-comedy. Girls fans in particular will be relieved to find Allison Williams (Marnie) can play someone other than a self absorbed narcissist. Both Palace Norton St  and Dendy Newtown  are running previews two weeks before this highly-anticipated US hit’s opening.

Palace Norton Street at 8.45pm and Dendy Newtown at 9pm 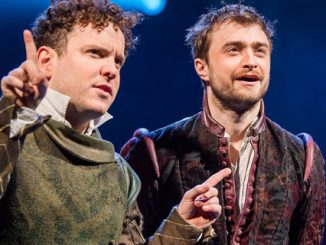