The Surveys are in. The polls have been checked. The competition was tough, but we’ve named them and you heard it here first!

Mr Inner West
The local member for Drummoyne John Sidoti has earned his place as Mr Inner West for 2014. Throughout the year he has supported the ‘What’s your state of mind’ mental health campaign, got behind the smoking band at children’s sporting events, promoted winter kids camps, welcomed the introduction of the new road safety issues education program in schools and encouraged community members to nominate their favourite local business as part of the NSW fair trading week. John Sidoti supports the community and actively participates, well done Mr Inner West!

Ms Inner West
She was the creative director behind the fabulous Glebe street fair, Roselle Gowan. She was the ingenious mind that delivered us the great Inner West event and at Ciao we applaud her work. She put on a great event, she got the community alive, out and moving. Whether it be through the opportunities she gave to local businesses, her inclusion of local artists or to the general community as punters by providing a little bit of ‘magic’. Roselle Gowan shows us what it really means to be Ms Inner West!

Best newcomer
The Stinking Bishops, a cheese bar in Enmore, which opened up in April. Enjoy a gourmet toasted cheese sandwich that has been named the ‘Mr Crispy’ or any of the other delightful cheesy dishes on the menu. Because, well, who doesn’t like cheese?!

Best new brunch spot
If you are looking for that mid-morning fix, we just could not go past Where the Monster Sat in Stanmore. The food is delicious, the staff are welcoming and it is dog and pram friendly.

Best green business
The Ciao winner for most ecologically friendly business goes to Vatel restaurant in Drummoyne. They also received the City of Canada Bay Environmental Business Award this year. Vatel has implemented sustainable practices such as reducing energy dependency, increasing solar power use, recycling general waste as well as food scraps with a worm farm. They show us that running a restaurant doesn’t have to equate to a large carbon footprint.

Best deli
We’re not going to lie, the Inner West has some pretty spectacular delis, though it must be stated that Paesanella really stood out for us! The Marrickville based food emporium has been winning awards for its exceptional produce since 2002, in particular its mozzarella, ricotta and bocconcini. Ok I’m going to stop now as my mouth is watering and I’m in the office…

Best coffee
This has got to be one of the most difficult categories to judge, especially in a caffeine dependent workplace like Ciao. This year’s winner goes to Paper Cup in Stanmore. This little coffee house uses Coffee Alchemy of Marrickville’s beans to make the perfect cup of coffee for the Inner West coffee drinker. Not only that but the vibe in the place is down to earth and the staff are lovely.
For the Non-coffee drinker
We now have (gasp!) two of those in the Ciao office who recommend the iced-chocolate at Bar Passalacqua in Leichhardt. (And for all you coffee lovers, they serve coffee too).

Best (almost) non-event
The Ciao Christmas party. Disagreements about the venue, the date, the menu, how much alcohol to serve and whether our interns should be invited…. They have all been resolved now, or have they? See our Whispers column in the next edition for all the bust-ups, hook-ups and office goss.

Biggest shock
TWO chicken shops opening in Haberfield within a few weeks of each other. Only time will tell if they both survive.

Most improved street festival
Haberfield’s annual Primavera street fair has gone through some development, and they have come out on top! The predominantly Italian food fair had lots to offer in October this year and we won’t be missing it next year, that’s for sure.

Best reincarnation
In October Full Circle, the people behind Eat In of Chippendale, ‘popped up’ Alfio’s Restaurant in Leichhardt. It holds a similar format to Eat In with two nightly sitting times, a four-course meal at $50 per head. And its BYO for all you wine connoisseurs on a budget.

Harris Farm at Drummoyne… How long will we have to wait? The site has been ready for 8 months – forlornly standing by to be occupied. What is going on? Hurry, the locals are hungry!

Most controversial new development
If the WestConnex got the trucks and traffic off Parramatta Rd, we’d support it. But the government doesn’t know that, and refuses to release any figures! No one knows how many billions it will cost or even where it now starts and finishes. Its octopus-like tentacles now stretch all over the city from Auburn to Cammeray to St Peters.

Most wanted new development
The last government was planning a Metro along the Parramatta Rd corridor to Westmead before it imploded, and had that gone ahead, no one would now be talking about a WestConnex motorway. Why does the North West get a brilliant futuristic Metro, the South East a super duper light rail… and the Inner West a hydra–headed motorway?

Best new apartment complex
There’s Central Park of course, already acknowledged as the best tall building in the world. But a runner-up has to be the Summer Hill Flour Mill. 85% of its units sold before noon on the day they went on sale. The people have spoken, and they want to live among us in the great Inner West!

Most bushy beards in one place
This one was surprisingly challenging with the growing number of Ned Kelly look-a-likes hanging around the Inner West. However, Ciao had to give it to Earl’s Juke Joint in Newtown. Between the bar staff and the patrons, that is a lot of facial hair!

Best Inner West related YouTube clip
‘The Newtown Bubble’ which went viral in June/July this year asked the subjects to describe Newtown and measure their ‘Newtowniness’ based upon a series of questions like how many Doc Martens they owned. Best quote – Interviewer: “Would you leave Newtown?” Interviewee: “Never, I will die here!”

Biggest Goodbyes
Sadly this year Ciao said goodbye to our editor Nancy in August and our Art Director Eleanor in December. Nancy has moved on to take on new challenges in a larger workplace while Eleanor has left us to live in sunny (snowy) Sweden. We will miss both dearly (sob).

Best contributions to the community
To all those who helped out in the Rozelle explosion. From the firefighters and emergency workers to the Rozelle neighbourhood centre who have helped rebuild Rozelle and maintain its attractions and community buzz.

To Lentil as Anything for proving that community contribution and showing us that charity doesn’t have to be bland in the slightest.

At home with… Simon Bimson 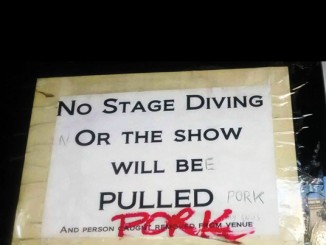 Jared serves up 2015 in a soft-serve cone