There are so many vehicles you can use to get around in the Inner West, some more popular than others. There are the obvious choices, such as cars and bikes, but also more unusual ones like rollerblades or motorised scooters. Excluding public transport, here are some of the best and worst options…

There seems to be an underground movement of night time rollerbladers in the Inner West; we’ve spotted them travelling in packs around Lilyfield. Rollerblades are great for getting around without polluting the environment but they aren’t really appropriate for indoor use so you’ll always have to carry an extra pair of shoes to put on once you’ve reached your destination.

Verdict: rollerblading should remain strictly a hobby. Sad but true.

Inner Westies are big bike supporters and with good reason – you don’t have to pay rego, they are environmentally friendly, handy in tight laneways, help reduce traffic and keep you fit. They are great to travel to and from work to avoid peak-hour hell. However, they aren’t great in rainy weather or when you have a lot of carry, and many local councils really haven’t implemented the best infrastructure to accommodate bike riders.

There are way too many 4WDs around the Inner West and I often wonder why, since they barely fit down half the laneways throughout Balmain and Newtown. Sure, they have their uses, like off-road driving on weekends, but you’re less likely to find parking spaces (of which there is already a limited amount in the Inner West) and many models are not good for the environment.

Verdict: Only if you need to transport a small army to and from school every day.

There’s space for a passenger or two, they generally use less fuel than bigger cars and they are easy to park, however there are all the same expenses involved with owning a big car – from environmental impact to registration and insurance.

Verdict: Probably the most suitable and popular mode of transport for the Inner West.

I’m pretty sure these aren’t meant for on-road driving, they are more of a slow-paced vehicle to help people get around shopping centres. However, I’ve seen a few speeding down residential streets in Haberfield and it looks like a lot of fun.

There’s something positively nerdy about segways that I love, plus they’re a fun, green way of travelling. However, they are illegal to ride on both footpaths and roads due to safety issues so not much use to us here in the Inner West. If you still want to try one out, there’s a ‘Segway park’ in Homebush where you can hire one and take a tour.

Verdict: The vehicle of the future.

A recent statement by Leichhardt Mayor Darcy Byrne reported a massive baby boom in the Inner West and referred to the area as “pram city.” Unlike all the other vehicles, they don’t require energy, money, coordination and/or a licence. And the Inner West is bustling with them so most businesses accommodate them – it’s ideal!

Verdict: If only I could still fit in one… 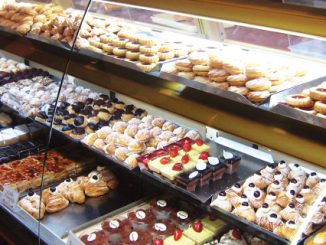 Roadtest: Be a Breakfast Sheik