What we’re watching at the cinema this week

War for the Planet of the Apes

Three eps in, most humans have been wiped out by the Simian flu virus unleashed by those foolish scientists experimenting with ape intelligence in Rise, and a new strain is rendering us speechless. Mankind’s last hope is a mad and sadistic military man (Woody Harrelson, playing a minor variation of Brando’s Colonel Kurtz). The apes are still lead by the aging Caesar (Andy Serkis), but his fur is graying now, and he’s bitter about the loss of his wife and son. Both he and many of the apes learnt to speak English in Dawn, but mostly they still communicate by expressive grunts, snorts and knowing looks (subtitled for us non-simians). And that’s amusing enough, but the fun of watching them evolve into much nicer version of homo sapiens than we humans managed was pretty much exhausted last time. Yes it’s a stirring sight to see them on horseback, looking after one another, and a 4-year old boy of my acquaintance (who I was foolish enough to show the trailer to) was thrilled to see they had guns. And can use them, for that’s the thing, Ceasar is struggling with an all too human failing – the desire for vengeance and blood. It will be his downfall of course, and for all the apes – but there are quite a few installments to go before we get back to original horrors discovered by Charlton Heston in 1968. Matt Reeves’s blockbuster action is fine, the CGI apes amazing but the story is heavy work, a slow heavy trudge through the snow to the inevitable explosions. By the next episode the ape’s bow and arrows will have been replaced by AK-47s and they’ll be ordering banana smoothies and bamboo-shoot take-aways on iPads. And all hope for the planet will be lost. M from July 27. ★★1/2

Movies that flop at the box office don’t often get remade, especially Australian ones that vanish without trace. Instead of courting the controversy it so desperately wanted, Josh Lawson’s The Little Death only produced another wailing round of “what the hell is wrong with the local industry?” angst in 2015. Torturously, that film sought humour in a man drugging his wife to sleep so that he could have intercourse with her, a registered sex offender introducing himself to the neighbours, a woman causing her partner emotional pain because she’s turned on by tears, and a man staging the rape of his wife because she confessed a fetish for violent submission. Its one idea, other than to get a reaction, was that weird peccadilloes like that are normal and everywhere behind closed doors. If you missed it the first time, you can now watch a version in Spanish, though you may need to be suffering a masochistic disorder yourself. This time it’s set in Madrid and much fluffier, lighter and more colourful (this is Spain, not Australian suburbia), but no more fun. I’m not sure what writer/director Paco León saw in the original material, or what Kiki, Love to Love’s distributor was thinking in bringing it to our shores. Perhaps they imagine Palace’s art-house audience are so nostalgic for early and middle period Pedro Almodóvar that they’ll go to anything that can be labelled as similar. But not all of Almodóvar’s films were any good (I’m So Excited). Neither is this one. MA15+ from July 27. ★ 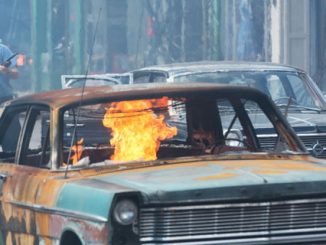