A few weeks ago, a (heavily pregnant) girlfriend of mine and I were catching up over the phone. After lamenting the fact that the (obviously comfortable) baby wasn’t planning on arriving anytime soon, she mentioned she’d been baking as a (rather tasty) distraction.

The apple cake/pudding she was baking sounded too good to pass up, so in solidarity, I decided to bake it as well. This recipe is by real food ambassador Alexx Stuart. It’s gluten, grain and refined sugar free, meaning you can feel extra good about the indulgence factor as you sidle on up for another piece…

90g butter
1 cup rice malt syrup or maple syrup
¼ cup black strap molasses (Optional. It just gives it such a rich flavour, but if you don’t mind a lighter style syrup and don’t want to overstock the pantry, skip it and do the extra ¼ cup in whatever syrup you’ve used above)
2 large apples, peeled and sliced thinly (about 3-4mm thick)
½ tsp vanilla bean powder or 2 tsp vanilla extract

1. Preheat oven to 180C and get 10 ramekins (or large sized muffin baking tray) ready to fill.

2. Put all syrup ingredients in a large pan (except apple slices – only add them once butter is melted) and cook 3-4 minutes on low-medium heat.

3. Spoon out a tablespoon of apples into each ramekin with 2 tablespoons of syrup. There should be enough apple slices to form a layer at the base of the ramekins.

4. Keep the rest of the apple syrup for drizzling with reckless abandon over the pudding cakes later.

5. For the cake: Put all ingredients into a bowl and using a hand mixer or food processor, mix until combined.

6. Line the bottom of each ramekin with the poached apple slices and spoon the batter evenly over the top.

8. The syrup might come up around the batter, but don’t panic. That’s fine. Just try and spread it out so the good big blob can be spread to touch the sides of the ramekins.

9. Bake for 25-30 minutes. Do a skewer test. Skewer is clean? Pull them out. Not clean and has batter on it? Pop back in for a few more minutes.

10. Pull out of the oven and rest for 5 minutes, then go around the pudding with a knife to make sure none is stuck to the sides, and flip over onto serving plate to reveal the beautiful glistening base, becoming the top.

11. Finally, spoon a little extra syrup over the top, plus a dollop of crème fraiche or homemade ice cream. 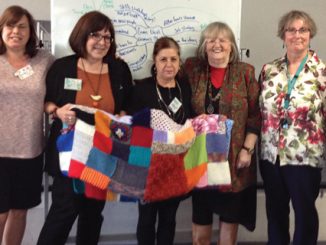 At Home with Cherie Thompson

At home with… Terry Hope Romero