You are originally from Northern Ireland, studied in England, and you then moved to New York and finally immigrated to Melbourne. What foods do you associate with these different times in your life?’
In Ireland I grew up on Irish stews and Ulster fries. An Irish stew is potatoes, lamb, carrots and onions stewed in a big pot with Worcester sauce, salt and pepper for about three hours. An Ulster fry is a breakfast food and not advised for anyone who wants to live past forty: fried bacon, sausage, egg, potato bread, soda bread and black pudding. (My mum used to fry it in lard, which while delicious is heart attack food)
In New York my food palate greatly expanded. The nearest restaurant to me on 122nd street and Amsterdam was an Ethiopian cafe and I used to eat there two or three times a week. My wife is Russian Jewish so we went to many of the cities famous Jewish delis often and got bagel, lox and cream cheese or pastrami sandwiches…

Your Sean Duffy series must require a tonne of research into the 1980s in Northern Ireland, are there any surprising facts that people don’t know about from this time? How much of your novels are based on your own memories?
Yeah, a lot of research. About four months of research on every book. But also my memories too. Particularly my own memories of the food and drink and music of the time. I suppose the most surprising thing was just how insanely violent it was back then. I’d forgotten or mentally blocked out the fact that a bomb was going off pretty much every week and there were riots and shootings somewhere in Belfast every single day of the 1980s!

Your protagonist Sean Duffy has a penchant for “the dark stuff”. Do you share his love of Guinness?
I like a good pint of Guinness and a really good single malt from the island of Islay. As Duffy says in one of my books of a 12-year- old Islay single malt: ““Twelve-year-old Islay. Good stuff if you liked peat, smoke, earth, rain, despair, and the Atlantic Ocean, and who doesn’t like that?”

What do you enjoy eating at home with your family?
I make a pretty good vegetarian lentil potato curry. I also make the girls [McKinty has two daughters] porridge pretty much every morning in the winter.

How do you feel about potatoes?
Love potatoes. I was amazed a few years ago when I was in Peru and discovered that Peruvians eat over 100 varieties of potatoes. I knew about six varieties so Peru is a potato lover’s paradise.

If you had to write crime set in contemporary Australia, who do you think your protagonist would be?
I live pretty close to St Kilda, a really diverse and interesting neighbourhood in Melbourne with many great food options. I’ve always liked the idea of having a PI who is also a baker because he has to get up at 3am in the morning and sees the neighbourhood in a way that no one else does.

McKinty will be speaking about his latest novel, Rain Dogs, at Ashfield Town Hall on May 19th, 6.30-7.30pm as a guest of Sydney Writers Festival. Book at ashfieldlibrary.eventbrite.com.au

Put a mug of porridge into a bowl, followed by a mug of full cream milk and a mug of water. Turn on a medium heat and bring to the boil, reduce to the lowest possible heat, add a big pinch of salt and stir continuously until porridge is thick (for at least seven minutes or so). Serve in bowls. Add brown sugar or honey or molasses to taste. Pour on a tablespoon of double cream. 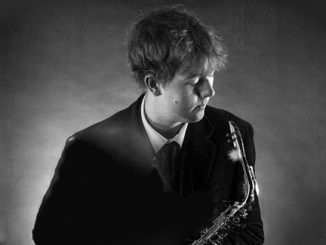 At home with Michael Griffin