With Melbourne Cup and party-season coming up I thought it might be relevant to review some of the places in the Inner West that have been helping locals achieve their grand designs when suiting up and frocking on. It’s true that every dress tells a story, especially when it comes to the person who made it.

Amy tailoring is actually run by a pretty remarkable woman called Reza who can perform any kind of alteration on formal and informal wear you desire, even leather wear. She learnt to sew when she was just seven years old to supplement her parents’ income when she was living in Afghanistan. Reza has been sewing for 25 years so it’s not surprising that Amy Tailoring is also known for the suits and dresses they make from scratch, including the one bespoke wedding dress they design and produce each month.

Rebecca and Mark make the ultimate tailoring and altering duo. When I went to visit Quee Tailoring Rebecca was organising the afternoon’s work while Mark, who’s been a tailor for 30 years, cooked up their lunch. Having worked for the likes of CUE, the pair are extremely fashion forward – Rebecca also runs her own wedding dress shop next door. Their clients mostly come for alterations to formal and bridal wear but Rebecca says she loves Sydney fashion because you can still look on-trend in the most casual (but well-fitting) of clothes.

A Splash of Red, Annandale

Maybe it’s not the races you’re excited about…maybe it’s the opportunity to dress a little bit racy? If that’s the case then I recommend booking an appointment with Leesa at a Splash of Red, who is not a tailor per se but a designer who is sometimes convinced to do alterations for people. A Splash of Red specialises in making customised fancy dress costumes, millinery, leatherwork and corsets – with bones and all! One great Melbourne Cup-inspired design was a dress and fascinator made entirely out of money! Come with a vision and it will be realised.

No Ferrari, switchblade or big moustache – if I was a man and felt pressured to prove some man things then I feel like a Herman Bros suit would be my go to item. Herman builds suits from scratch, beginning with a bro-to-bro tailoring session, and (for a price) will make it by hand all the way down to the buttonhole. The business has 300 fabrics in their house collection alone and a ‘wall’ of shirt prototypes, plus a collection of inspirational quotes up their sleeves to push you to dress your best – my favourite is, “Procrastination is the thief of time, collar him.” The only question left is – which side do you dress to, sir? 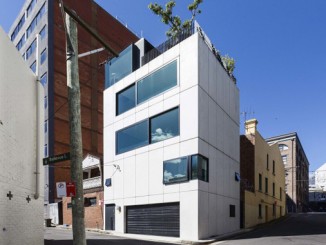