The festivities of this year’s Good Food Month are well and truly underway with successful festivals, stalls and pop-up restaurants having already graced the streets of the Inner West. If you’ve missed out, don’t worry there’s still plenty more where that came from. Enjoy two whole weeks chock-a-block with great food, wine and fun.

On Sunday the 2nd of November Haberfield will close off the main street for a day of market stalls and entertainment that will spill over into the evening. The event is set to showcase all of Haberfield’s leading Italian food outlets and the cultural heritage sites that underpin this great suburb. Come along and enjoy the best of Italian pastas, pizzas, bread, cakes, cheeses and coffee.

• On the corner of Dalhousie and Ramsay Streets. Sunday 2nd November, 10am-3pm.

This banquet will put your grandmother’s recipes to shame as Vinery Foods owner Joseph Moussa delves into his Lebanese heritage and delivers a beautiful banquet for two with a glass of Lebanese wine, or a Lebanon Pale Ale included for only $40 per person. This menu specialises in Lebanese food but maybe not as you know it, think pulled pork salad or crispy skin ocean trout with lobster consommé, enoki mushrooms, crab meat and black barley. Count us in!

This years Norton St Festival is coinciding with The Good Food Month. The festival hardly needs an introduction, its previous successes making it one of the most highly anticipated festivals of the year. It is well known throughout the Inner West for its great family-friendly entertainment and delicious food. Expect to see the local nonnini out there cooking up a storm as well as My Kitchen Rules winner and popular food blogger, Enza Guarino.

The Best of Pub Food

Drop into Woolwich pier hotel for their slow roasted pork belly pie with a Coopers Pale Ale. The Henson Marrickville’s wagyu beef cheek is making a stir. And The Sackville Hotel in Rozelle is serving up morrocan lamb shank and eggplant tagine pie.

Dinner and a Show

The Living Mall at Central will be holding screenings of classic foodcentric films as part of this years Good Food Month. The films being played include David Cronenberg’s scary and twisted Naked Lunch, Ang Lee’s hilarious Wedding Banquet, Alfonso Arau’s Like Water for Chocolate, which provides an insight into the old culture of Mexico, and Tony Scot’s The Hunger, a cult classic demonstrating what vampire movies were like before Twilight. The tickets include a $10 food voucher for the Central Kitchen so you can complete the experience.

It’s no surprise that Locantro Fine Foods is a favourite amongst Leichhardt locals.  With almost 20 years experience in the coffee grinding and pastry stuffing business this is one cafe that’s truly perfected their art.

Word on Leichhardt’s leafy streets is that Locantro Fine Foods has the best coffee in the Inner West. Although this is one contested issue we’re not willing to comment on, we can confirm it’s pretty damn good.

Their premium Campos Superior blend of coffee, characterised its smooth base and a fruity highlights, certainly makes for a memorable coffee experience. But it’s not just the coffees that draw the crowds, with a selection of freshly baked breads, pastries, cakes, tarts, paninis and pizzettas that have everyone raving. Also new to their menu is the naughty but delicious cronut, being made infamous by cafes across the Inner West.

Don’t get us wrong, Locantro is no average Inner West cafe, this becomes apparent as every last detail, down to the kiwi slice in your fruit tart, is made with fresh produce and uppermost care.

If you have a major sweet tooth we recommend the cartocci, an Italian spiral doughnut filled with custard cream and rolled in cinnamon sugar or the raspberry and almond tart with a shortbread base filled with almond cream and raspberries.

A favourite amongst locals is the tiramisu stacked with four layers of vanilla sponge soaked in espresso coffee, filled with mascarpone cream and topped with fresh cream and seasonal fruit. Do we need to say more? Probably not, but we will anyway.

The homemade arancini might be better than your mum’s and the chicken and veggie pies are filled with incredible meat chunks and pastry that melts in your mouth. Also try a range of the pizza slabs like the Hot Salami, Artichoke, Capsicum and Olive.

This family run business has all of the qualities of our greatest Inner West cafes without the pretension. The service is welcoming and familiar and the prices are more than fair.

Established in 1881, The 3 Weeds is one of the original Inner West pubs and has evolved to become one of the finest boutique hotels in Sydney. Considered by many to be the best kept secret of Rozelle, this hidden gem combines the charm of a local pub with innovative, quality food.

As testimony to that claim, it won Best Restaurant in a Club/Pub or Tavern for the third consecutive year at the prestigious Restaurant and Caterers Savour Awards For Excellence announced last month.

On accepting the award The 3 Weeds head chef Nathan Jackson said, “It is great to have successfully continued this winning streak for The 3 Weeds and the award is tangible proof of the consistent quality of our food and service.”

Jackson, who has been head chef at The 3 Weeds for the past six months is passionate about the provenance and freshness of his ingredients. Having cooked at the likes of La Grillade, Manta, Public Dining Room and Mezza Luna, his philosophy is to consistently deliver memorable, thoughtful and delicious food from ethical and sustainable sources.

The emphasis is on fresh seasonal produce: from fresh herbs and greens from the onsite kitchen garden to the best offerings from trusted local providores.

As part of October’s Good Food Month, Jackson and The 3 Weeds will work with legendary forager and weed hunter Diego Bonetto for a wild foraging expedition followed by foraged meals back at The 3 Weeds. To be held on Sunday 26 October, attendees will join Bonetto in Callan Park to learn about local edible weeds and super foods. The foraging will culminate at The 3 Weeds for a lunch or dinner cooked by Jackson using sustainably sourced examples of some of the wild flora identified in Callan Park.

Il Gelatiere Café is owned and operated by husband and wife team Giuseppe and Daniela Tripodi and born from the passion to bring a real, modern Italian café to Sydney’s own little Italy.

When Giuseppe first arrived in Australia five years ago, the first thing he noticed about the cafes in Leichhardt was how old they seemed. All the Italian cafés in the area were so traditional and he realised that it was because the vast majority of Italians here were either second-generation or had immigrated in the post-war era.

With a desire to show Sydney the real, contemporary Italy, and a background in hospitality, Giuseppe, with his wife Daniela, decided to open up Il Gelatiere at 1/55
Norton St.

The philosophy of Il Gelatiere Café is to use the best Italian recipes and ingredients and to make as much as possible right on the premises. Other than Giuseppe’s artisan gelato recipes brought from back home, he and Daniela are proud to be the first café in the Inner West to offer the original piadina, a northern Italian flatbread baked by Daniela herself, as well as Aiello coffee beans, ranked as the number one coffee in Italy.

This coffee is a blend of robusta and arabica beans, giving it a unique sweet and creamy flavour and helping you cut down on your sugar intake. Il Gelatiere is committed to taking these small steps to healthiness, which is why they use A2 milk in their coffees and gelato.

Apart from their superb artisan gelato and real Italian coffee, which combines into a truly mouth-watering affogato, Il Gelatiere Café has a great selection of freshly made panini, as well as many different cakes, sweets and muffins, all made on the premises and available in gluten-free form!

While Italy has always had a rich tradition of fabulous food, Giuseppe and Daniela’s new café proves that delicious food has no borders.

Secret Foodies are holding an Eat, Drink and Think day as part of Good Food Month.

Hosted at the Newtown Neighbourhood Centre, the day will be full of insightful and helpful talks from some of Newtown’s most acclaimed food and drink experts. The day will kick off with the owners of Black Star Pastry, Mak Mak Macarons and Mary’s as they discuss what it means to have a signature brand and whether this niche marketing can sustain a successful business.

This is followed by a talk on ethical produce from Feather & Bone, Green Living Centre and Real Food movement. They will discuss how environmental practices can be used in everyday life. The day will end with a talk on everything to do with fermentation, where you’ll learn about pickles, sourdough, cheese, beer and wine. Cornersmith, Young Henry’s and Ferment It will join in on the action. And better yet, there will be a tasting afterwards with all the best of the fermented products: bring on the stinky cheese and craft beer!

Ciao’s very own Battle of the Baristas

Which Inner West suburb has the best coffee?

The question of which cafe has the best coffee in the Inner West is one that has long been sought after. Inner West locals have trawled the streets, scoured magazines and started many an argument in the search for that perfect blend.

Ciao’s battle of the baristas is back this year with a twist that tests which suburb has the best baristas and beans in the business. We have invited baristas from some of the Inner West’s most loved coffee spots, such as Excelsior Jones, Brewtown Newtown, Black Toast Coffee and more to compete.

Join us during the Norton St Festa to see which suburb has the best coffee and on what grounds (excuse the pun). 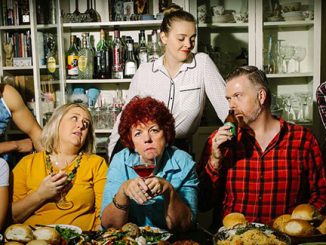