When I asked Dr Anne Fawcett how her love of animals was born, she told me a story…

When she was still in the womb, a stray cat came to sit on her mother’s stomach. It didn’t move for most of the pregnancy. “And that was the cat I grew up with.”

Anne grew up in Newcastle, moving to the Inner West in 1996 to attend the University of Sydney, first to study philosophy, then veterinary science. Now working as a vet in Stanmore, she’s also the creator of a blog – Small Animal Talk. It allows both veterinarians and pet owners to learn more about facilitating the wellbeing of little critters.

Her “hidden agenda”, she confides, is promoting the welfare of companion animals, which she feels is often taken for granted.

“I’m an Inner Westie,” she proclaims proudly. She hasn’t lived anywhere else since 1998, and has no plans to. When I ask her why, she rattles off an extensive list: parks, views, coffee, people, transport, nearby beaches, historical sites. Then she pauses, considering the question more seriously. “It really feels like a village,” she says slowly. “Even though we’re in this incredibly densely populated city, when you’re in the Inner West you really feel like you’re part of a community. I love that.” Plus, she knows that Inner Westies take great care of their furry friends.

Words by Hannah Craft. Image courtesy of My Dog’s Territory. 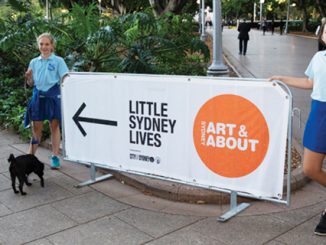