With the buzz surrounding this month’s Zine Fairs, it’s an ideal time  to unearth the Inner West’s dynamic self-publishing scene

For the uninitiated, a zine (short for magazine or fanzine) is a handmade publication usually reproduced in small numbers on a photocopier. They represent the open self-expression of the creator, and cover a range of subjects such as politics, feminism, pop culture, art and personal stories. Often traded between zinesters, they are also sold or given away at zine fairs, record shops, book stores, concerts, and zine distribution centres. Despite the digital age, zines are embraced by those seeking an alternative to modern technology and mainstream culture. Dulwich Hill denizen, Vanessa Berry, and Newtown native, Chris Mikul, have created zines for twenty and thirty years respectively and write extensively about life in the Inner West.

Why do you create zines?

Vanessa: When I started as a teenager, I found the eccentricity and energy of zines engaging, and they were a way for me to put my thoughts out into the world. I’ve continued to make zines consistently since then. My writing has been published in many forms and mediums, but I continue to make zines, as there’s a freedom that allows me to experiment and to write freely without the constrictions that come with traditional forms of publishing.

Chris: I’m obsessed by unusual, often obscure people and subjects. I need to find out as much as I can about them and share what I’ve found with others. I love the process of putting a zine together. I also like the zine community. I have friends all over the world thanks to making zines. When I published the first issue of Bizarrism in 1986, I certainly didn’t think I would still be publishing zines today. But it’s never dull, and I think that in this digital age it’s more important than ever that people are still making printed zines.

Vanessa: Most of my zines are text-based. Some of them are produced on a typewriter. In the early days, I used clippings from books and magazines and my style was quite cluttered and chaotic; these days it’s much simpler. I also draw maps for some of my zines, as I write a lot about places, particularly places in Sydney.

Chris: I used to say I wanted to write seriously about flippant subjects and flippantly about serious ones. I always try to be readable and, I hope, entertaining. I also do an enormous amount of research. When I’m writing an article, I try to read everything I can that’s relevant to the subject and get the facts right as far as possible.

You are both renowned for creating zines that capture the places, faces and events of the Inner West. Tell us about your work.

Vanessa: Many of my zines have stories from the Inner West, as I’ve lived here for twenty years. My zine I am a Camera #17 was about some of the area’s landmarks and the changing urban environment due to redevelopment. I believe it is important to record these connections, and value the built environment as a place rich in stories. The first zine I made that focussed on the Inner West was in 1998 about the Camperdown Velodrome, which was where O’Dea Reserve is these days, an abandoned velodrome tucked in behind the light industrial area of Camperdown. It was a special place for me and it’s still part of my mental map of the city, even though it has long since been redeveloped into a park.

Chris: I think of myself as the unofficial historian of Newtown. I’ve been collecting stories and ephemera relating to it for years. A lot of that went into the zine King Street, Newtown I did in 2012, which traced the street’s history from the opening of the ‘New Town Store’ in 1832. There have been so many interesting characters who have lived here over the years, and it’s wonderful that so much of the original architecture has survived.

The Inner West is home to a lively zine community. Why do you think zinesters gravitate to the area?

Vanessa: It’s an area with a strong creative culture, which has carried on from the 1980s when it was a cheap place for artists, musicians and other creative people to live in. This is what attracted me to it when I moved here in the 1990s. This identity has continued into the present, despite its growing gentrification. Its connection to creative culture has shaped the Inner West’s identity, and people continue to gravitate to it because of its diversity. There’s a strong sense of community pride and inclusion, and the eclectic physical environment inspires creative responses.

Chris: I think zinesters, being creative people who think outside the box, are naturally drawn to the Inner West where they will find like-minded people. It’s just a pity it’s so expensive to live in suburbs like Newtown these days.

You’ve both lived in the area for many years. How has it changed in this time?

Vanessa: The area has continually gentrified over my time living here. The older generations of migrants and working class people who used to live here are now less of a presence, and a younger and more affluent population has come to live in the area. There has been a lot of demolition and redevelopment where I live in Dulwich Hill, some of which is sympathetic to the area’s character, some of it not, and this continues to be controversial. The huge demolitions for WestConnex are also changing the area, and it remains to be seen what the effects of this project will be.

Chris: Newtown was the first place I lived in when I moved out of home in 1981. It was run down and many of the shops on the southern stretch of King Street were empty, but it was also a mecca for students as rents were so cheap. It’s obviously become a lot more gentrified since then, but in other ways, it hasn’t really changed much at all.

View Vanessa’s work on her popular Mirror Sydney blog www.mirrorsydney.wordpress.com. Chris’ books, The Eccentropedia and Bizarrism, are published by Headpress, www.headpress.com. Vanessa and Chris will showcase their zines at Other Worlds Zine Fair on Sunday, 28 May.

The following zine fairs take
place in May:

Sunday, 21 May, at Museum of Contemporary Art, 140 George Street, The Rocks 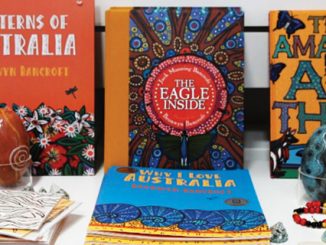