Two tough and sinewy films open this week – for those who like plenty of meat on the bone.

Undoubtedly the real Adam Cullen would have been delighted to have been portrayed on screen by Australia’s most notorious killer, John Bunting. Or at least the actor (Daniel Henshall) who played the Snowtown mass murderer so menacingly in 2012. Henshall bears such an uncanny resemblance to the renegade artist and Archibald Prize-winner that even Cullen’s close relatives assumed they were looking at archival footage in some scenes of Thomas M. Wright’s astonishing directorial debut. They weren’t of course, Cullen died at age 46, largely as a result of his own demons and substance-abuse after a lifetime of being fascinated by transgression and violence. But what an incredible achievement this movie is – there are just so many brutally uncompromising and truely awful but can’t-look-away scenes. And the clue to our discomfort comes early as Adam, in just one of many confrontational scenes with his biographer Erik Jensen (Toby Wallace), states his role as an painter: “It’s the only profession in the world where your employer wants you to die.” What, Jensen asks? Cullen spits it out: “Count the art dealers at my fucking funeral.”

The precociously talented 19-year-old journalist Jensen (now editor-in-chief of The Saturday Paper and The Monthly) had been sent by the SMH to profile Cullen on the eve of his AGNSW Retrospective. The two men hit it off, and Cullen asked to Jensen to write his biography, which he claimed had been commissioned by a reputable publisher. At some stage Jensen discovered that he’s been lured to the artist’s Blue Mountains hideaway under false pretences, that there was no book deal and Cullen was probably in love with him. But by that stage, the “damage” so to speak, had been done. Maybe the young writer figured, as Janet Malcolm succinctly put it in The Journalist and The Murderer, “Ok, I do actually still have a story, provided there is a funeral…”

While on the job Jensen is “accidentally” shot by Cullen, pushed off a moving motorbike, and repeatedly humiliated while the abusive, serial liar and drunk/smack-addled Cullen spirals inexorably downward. The immediate reaction of most viewers coming out of the cinema (apart from immediately wanting to have a cleansing hot shower) will be to ask,” Why did he stay? WTF did he think he was doing?” They’re variations of the question an incredulous Geraldine Doogue put to Jensen on ABC-RN when his book of the same name came out in 2014. “I have to say this” she asked, “Why did you write this book?” To his credit (and this interview is well worth watching), the young gay writer doesn’t duck the question, but still – watch the forensically revealing and sinisterly disturbing film too (which Jensen co-wrote with the director) for more clues, and take a deep dark dive into the murky motivations of writers and artists. And, still… Acute Misfortune raises just as many spiky questions as it answers. It is a spectacular achievement. MA15+ from May 16 at Dendy Newtown. ★★★★★

Little Woods, an impressive but tough-going debut feature from writer/director Nia DaCosta, takes place in a small North Dakota fracking town fraught with a lot social dislocation. The gas boom is pumping oil money somewhere, but the community itself is made up of hardscrabble working class men and women who can’t make enough to live comfortably. Desperation runs through their veins, and so does the Oxycontin.

Ollie (Tessa Thompson) is the adopted black daughter of a mother who has recently died, leaving only a house no one wants to buy and a mortgage that can’t be paid. After getting caught running pills across the border from Canada for a local drug dealer, her probation is almost completed and a fresh start seems possible. But the lure of quick money becomes impossible to resist, particularly after her trouble-prone half-sister Deb (Lily James), already a single mother, finds out she’s pregnant again from her usually drunk and always absent partner, Ian (James Badge Dale) – also Ollie’s partner in the pill pushing business. Deb is less resourceful and barely coping – she’s living with her son in a van parked illegally in a shopping centre. But one last big score and the family is back on its feet, or at least that’s the hope…

We’ve been to this desolate turf before in tough and acclaimed rural neo-noir indies like Hell or High Water, Frozen River and Winter’s Bone – and Little Woods is a worthy addition to that genre. That last classic by Debra Granik, also about a tough young woman with thorny family issues shot Jennifer Lawrence to fame, and a lot of critics seem to think this will do the same for Thompson (Creed 2, Sorry to Bother You). Maybe, she certainly gives a layered and powerful performance, but the script is a bit too spare in supplying her character with a backstory or believable motives, so at times her actions are hard to fathom. One thing is clear, all the males in the sisters’ lives, all hairy and largely indistinguishable, are either deadbeats or menacing brutes. Rarely have working class Americans been portrayed quite so unsympathetically – but then they’re white, and men… Probably Trump-voters too, so clearly, deserve all the contempt they’re dished out. Then again – maybe its worth noting that DaCosta who is from NYC, had never been to North Dakota before making this film. M at Dendy Newtown from May 16. ★★★★

In an excellent week for arthouse releases, two thrilling political films happily coincide with our own less than thrilling federal election. Both The Realm (above) and Peterloo are excellent too – reviewed here.

The Hustle Rebel Wilson was probably looking for a surefire way of paying her lawyers in co-producing, starring in this con artist caper flick, a gender-flipped near word-for-word and gag for-gag remake of 80s hit Dirty Rotten Scoundrels staring Michael Caine and Steve Martin (itself a remake of a 60s film starring Marlon Brando and David Niven). But like the Bauer media defamation case itself, it’s another miscalculation for the comedian, whose trade-mark plus-sized slapstick struggles to raise a single smirk. There’s zero chemistry between the two leads – Anne Hathaway just looks totally confused by her role as a sidekick to the gormless Aussie. Most puzzling of all is why the Academy Award-winning actress took on such a demeaning part. M on now ★1/2

Poms is another in the now continuous stream of Post-Marigold Hotel movies aimed at those who fill the (highly discounted – is anyone making any money from them?) mid-week daytime sessions of our arthouse cinemas. Many of them star Diane Keaton doing slight variations of the Annie Hall character she made famous 40 years ago. This time she plays a retirement home resident leading a cheerleading troupe of “golden-aged” dancers. Single star material like this should be referred to the Royal Commission on Aged Care, and it’s makers hauled up to face some sort of elders abuse  tribunal. Please, Diane, enough!  PG on now ★ 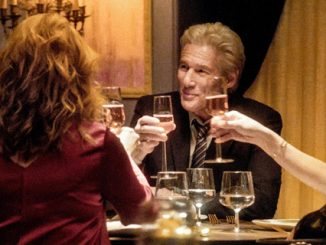 The very best of the beans