The program exists to support local community projects that will benefit the lives of residents in the Marrickville area. Categories of supported projects include: Arts and Cultural Development, Community Cultural Development, Independent Artist, Community, Sustainability and Recreation, with standard grants offered from $500 to $7500 per project. In addition to the base grants, the Council will be administrating ClubGrants with a value of up to $25 000 per project.

The benefits of the grants can be seen in the courtyard of Thomas Roseby Lodge, a local aged care facility, with landscape designer and grant recipient, Helen Worrall, able to turn the space into a vegetable garden, where residents are able to be involved in the growing process. Applications for the grants will close on Wednesday June 1st.

For further information or to discuss applications call 9335 2222 or visit www.marrickville.nsw.gov.au/grants/

This Saturday, the City of Canada Bay Council is holding a community picnic to celebrate the official opening of Lewis Berger Park in Rhodes. The renaming of the park follows a campaign by a number of local residents to recognise a prominent figure in the history of Rhodes. Lewis Berger & Sons (now known as Berger Paints) begun manufacturing paint on the Rhodes Peninsula in 1916, creating hundreds of local jobs at a time where they were desperately needed.

According to the City of Canada Bay Mayor, Angelo Tsirekas, the renaming recognises Berger’s contribution to the community “and reflects on the rich industrial history of Rhodes”. The park, which is located on Rider Boulevard, opposite Rhodes Waterside Shopping Centre, will be the location for the event, which will also commemorate the relocation of the ‘Berger Honour Shrine’ war memorial from Queen Elizabeth Park, to its original location in Rhodes.

Have Your Say on Sydney’s ‘New Brooklyn’ in Sydenham

Marrickville council has launched a proposal to rezone the area directly behind Sydenham Station, with plans to develop the area into a Creative Hub and is calling for community members to comment on the plans. The area, located directly under the Sydney Airport flight path, is unsuitable for residential development.

The council imagines the area as a “vibrant entertainment and employment precinct”, according to Mayor of Marrickville Councillor, Sam Iskandar. “With the fantastic transport links the area has, we believe a Sydenham Station Creative Hub could easily become a must-visit destination for all of Sydney,” he says.

Following the closure of comments on the May 17th, a report outlining the comments made by the community will be considered by the Council in June this year, with the goal of submitting a planning proposal to the NSW Government shortly after.

To have your say, fill in the survey at: yoursaymarrickville.com.au 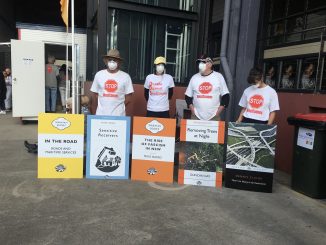