Not so long ago someone like Osamah Sami, the talented co-writer and star of the sweetly charming Ali’s Wedding would have lived in the inner west. Wave after wave of migrants once made the suburbs around Leichhardt, Newtown and Marrickville home, though not any more. Having brunch in a typical Erskineville café the other morning, one of those places all decked out in recycled timber and raw concrete and glowingly referenced by Domain, I was surrounded only by white faces. There was a solitary Asian couple nearby, but they weren’t eating steamed buns or rice noodles, they were ordering the same as everyone else – that ubiquitous signature dish of our new monoculture – avos on sourdough toast…

But you don’t have to go too far, just cross the Cooks River or head west down Parramatta Rd and everything changes. There the colourful vibrancy of multicultural urban Australia still exists – and it’s the setting for Ali’s Wedding. Actually that’s Melbourne, though it could have just as easily been Lakemba or Auburn. And like those suburbs, what breath of fresh air the movie is! It may not have the same smarts as in the similarly themed The Big Sick, but it’s still irrepressibly funny throughout. It’s such a relief to discover Australians can do rom-coms really well, provided that is, they’re not written by someone from Newtown who thinks anywhere west of King St is “boring”…

Seasoned pro Andrew Knight co-wrote this, but on screen there are no white faces at all – save from one unnecessary cameo from Ryan Coor as an idiot friend called “Wazza”. Sami himself is the shining light that makes it all work; he plays the son of Muslim cleric (Don Hany) and victim of his Iraqi refugee family’s high achieving ambitions for him – as well as his own foolish missteps. When he fails to get into medicine at uni, he decides to fake it, but even after meeting the love of his life there – a “fallen” Muslim girl (fantastic newcomer Helena Sawires) who wears (shocking!) “ripped jeans”, he still ends up embroiled in an arranged marriage with a family friend.

Given the nation’s sour mood, this could have been a risky project for director Jeffrey Walker, but such is the film’s genuinely authentic charm, universal humour and really winning chemistry between the (very chaste!) lovers, its local multiplex success isn’t in any doubt. Yes they do kiss, finally, but I don’t think I’ve ever seen anything quite so erotically charged as those two fingers tentatively interlocking in a darkened cinema. It was lovely. What a gem! M from Aug 31. ★★★★

Since this is a love story between two men who live on a farm, Brokeback comparisons may be inevitable. But refreshingly Francis Lee’s stunning debut steers clear of LGBTI political tub-thumping, and makes no reference to homophobia at all. In fact the only bigotry shown is the Brexit variety. Lyrical, emotionally dense and beautifully shot on the high Yorkshire moors, this is the story of how self-hating sheep farmer Johnny (Josh O’Connor) slowly awakens to the possibility of a new and brighter future after Gheorghe (Alex Secareanu) a Romanian migrant worker comes to help with the lambing season. The sex on display may be explicit, but way more confronting are the scenes showing the slimy reality of animal husbandry and mucky farm drudgery. It’s all hyper-real, intense and convincing but if there is one false note in this otherwise near-perfect film, it that Gheorghe is too perfect. Taciturn, handsome and tough, he can look after himself in pub fights and then show gentle tenderness to farm animals and Johnny’s mum. Heck, he even knocks up a brilliant breakfast. Who wouldn’t want to marry him? MA15+ from Aug 31. ★★★★ 1/2

The audience at the Girls Trip “event” last Friday night at one of the VMaxs were not the usual media, but lots of dressed-up adult women all plied with free sparkly beforehand by the very generous distributor, Universal. And that meant things soon got very weird… First sign was the hooting and hollering at any joke (and there were quite a few) which seemed to suggest all anyone needed for any of life’s travails was something “big and black.”  Sexist? Demeaning? That’s the way we media reptiles have been trained to think, but we’re wrong. Nah, this movie is celebrating black sisterhood and sexuality, or so its pre-release publicity would have us believe. The girls in the audience shrieked louder when a naked homeless man wobbled his bits at them. Then when the one uptight character (“boring” because she’s raising a family) finally got into the spirit of the film and peed like a garden hose all over a crowd while swaying above their heads on a swing, there was so much hooting and hollering I missed most of the dialogue in the next scene (“Settle down, children…”) Did it matter? Nah. Do I need to say anything more about Girl’s Trip? Nah. MA15+ from Aug 31. ★ 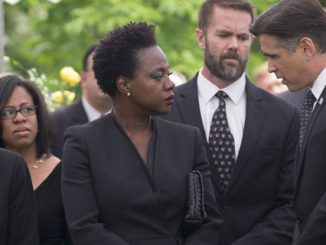 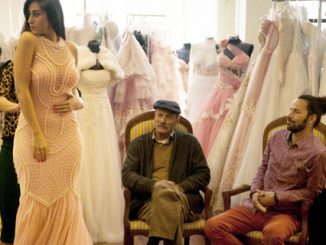