From growing up in Croydon Park and playing for Enfield Rovers Soccer Club to his current home in Dubai as member of UAE professional team Al-Nasr, Brett Holman’s life has been shaped by his love of football. In light of his recent retirement from the Socceroos – and just because the World Cup has got us in the soccer spirit – here we chat to Brett about his humble beginnings and long journey to global stardom…

Brett Holman first began kicking balls around his local park at the tender age of five and, like many boys from the Inner West, he was soon hooked. Considering the ethnic roots of the area and its position as one of the few places in Australia where football has always been as popular as the other codes, it is not surprising that his love of the game grew. Brett himself admits, half-jokingly, that one of the main reasons why he started playing football in the first place was simply because “everyone else was doing it.” The sly smile he gives as he says this is all the proof I need that he genuinely enjoys the beautiful game.

Growing up, playing professional football was never the one and only goal; his life wouldn’t have fallen apart if he didn’t achieve this dream. Like most ambitious soccer players at the time, he watched the blossoming careers of fellow Aussies Harry Kewell and Mark Viduka with more than passing interest but it was only at 15, when he was recruited by Parramatta Power (one of the teams from the former National Soccer League), that he started to see turning pro as a real possibility.

Scoring a full-time place at Parramatta Power, Brett was forced to drop out of high school and his life was set on a strict course towards a career in football. Asking him now what other paths he could have taken, Brett is confident that if he didn’t work somewhere in the sports world, then he was certainly on track to become a tradie and had actually already begun an apprenticeship before joining the NSL.

By the time he was 18, Brett was signed by Dutch football club, Feyenoord, and for the next decade he played in the Netherlands. He recalls how hard it was to move to a completely new nation as such a young man and try to build a life. Fortunately this became easier when he met his wife, a Dutch local. He now observes that the support from a loved one is really what makes it possible for a professional athlete to get through the harder days.

When he was recruited by Aston Villa for the 2012-2013 season, it was almost like returning home. Brett was in an English speaking nation with a familar culture but then it was his wife and children who were the ones that felt like foreigners.

Now, with his latest move to Al-Nasr SC in Dubai, the entire family are in an entirely foreign place together. He says that while “there is a great culture shock” it is “hard to really define the negative of this experience”. Once again, he emphasises how important the support of his family has been throughout his career and in moving from country to country – a challenge experienced by countless international soccer players who have little option but to live a nomadic lifestyle.

With another year left on his contract with Al-Nasr, Brett said he would really like to see the relationship continue, at least for another couple of seasons. That might surprise some, who would be forgiven for thinking Brett is nearing the end of his playing career, following his retirement from international football in April. Brett denies this, saying his body feels great and that he can’t see the end in sight for a while yet.

Discussing the idea of retirement in general though, Brett seemed almost excited by the idea, noting it would give him the opportunity to travel across Australia with his family and show them all of this beautiful nation. When he does eventually retire from professional football, he intends on getting his coaching licence – though if and when a career in coaching is on the cards is uncertain at this point.

On the topic of his departure from the Socceroos, Brett said he just felt it was time. “All the decisions I’ve made in my career have been with the support of my mum and dad, and now my wife and family, but at the end of the day they say, ‘The decision is up to you’. I’ve always followed my gut feeling and that was one of the feelings I had. I have no regrets in retiring from the Socceroos.”

Although he didn’t join them this time, Brett was very excited to cheer on the Socceroos during the 2014 FIFA World Cup and counts scoring the opening goal in 2010 as one of the best memories of his career. Australia was unlucky with its group placement, going up against the defending champion and runners-up in Spain and Netherlands respectively, as well as Chile, which is a very strong team. Brett wasn’t too dismayed when I asked him about this before the games were played. “It’s going to be tough, but hopefully the Socceroos can put in a few good performances and shock some people who are thinking that we’re simply making up the numbers,” he said. For those with a taste for a little wager, Brett’s tip for the winner of this year’s World Cup is Argentina.

Other than our international dreams of glory, Brett is pretty optimistic about the future of football back on our local turf saying that “Western Sydney really sums it up in a way.” A new team comes into the A-League and it’s already had great success and garnered huge support, winning the premiership in its first season and securing the runners-up position in their second.
“It really shows the passion from the western side of Sydney,” says Brett.

On top of that, we are seeing truly talented and experienced international players come and join our league, a sign that the sport is destined to get better and better. Best of all, according to Brett, the other codes are really starting to recognise football and give it the respect it deserves. All that’s left now is for us to host the World Cup, we joke, and then the sport truly will unstoppable in Australia.

Whether you’re hoping to watch Australia go out with a bang against 2010 champs, Spain, or you just want to enjoy some quality football, there are some games that you really shouldn’t miss…

Sunday 22nd June
2am: Argentina vs. Iran
5am: Germany vs. Ghana

Tuesday 24th June
2am: Netherlands vs. Chile
Australia vs. Spain
6am: Cameroon vs. Brazil 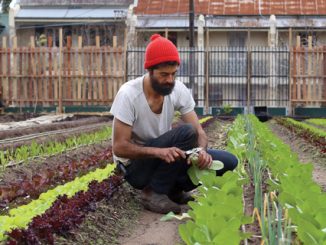 At Home with Michael Zagoridis 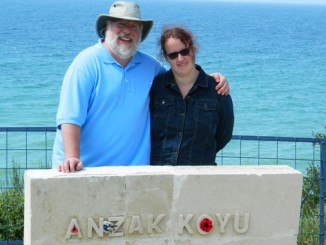