You won’t find our top choice in inner west art-house cinemas this month. In fact, it’s getting far too few screens anywhere. Is this a case of trans-Tasman jealousy asks our NZ-born reviewer?

Once again the Kiwis have delivered a sobering lesson to Aussie filmmakers on how to make good-natured, genuinely funny comedies (Hunt for the Wilderpeople) that local audiences actually like. Mind you writer/director Matt Murphy had great source material here – his own dad’s huge hit in NZ, 1981’s Goodbye Pork Pie. This clever update is considerably sleeker – as is the flash new canary yellow Mini Cooper S that races from one length of the country to the other with the cops and media in hot pursuit. Admittedly it has lost some of the grungy gonzo spirit and anarchic style that made the original such a treasured memory with that country’s (disproportionately large) population of dope-smokers. But, in the interests of a bigger more mainstream international audience, such calculations can be forgiven.

This time blocked novelist Jon (Dean O’Gorman) and petty crim on the run Luke (James Rolleston) team up with Keira (Aussie actress Ashleigh Cummings), an animal-rights activist. She’s a vegan, the sort that still  loves NZ’s hokey pokey diary ice cream. Jon is the “plonker” (as described on national radio) whose need to apologise to woman he’s wronged fuels the trip. Luke is the expert wheelman, whose leaden foot makes sure the stunt-filled drive is fast and furious. Then there are distractions, misadventures and some choice cameos, all there so that we get to know and care about this likeable trio of misfits, and how they ended up on such a lunatic mission together.

Inevitably, that’s through some of the South Island’s finest scenery – for their determined gaol is to get “all the way to Invercargill!” Which, as it happens, is where I was born… Now as every Kiwi knows, Invercargill is a remote provincial centre known only for its extreme dreariness and having the worst climate in the country. Nobody ever wants to get to Invercargill! There’s no shortage of knowing sly jokes in this lively warm-hearted comedy, but maybe that’s the best one of all. M from May 4.  ★★★★

Black man (Daniel Kaluuya), white girlfriend (Allison Williams) and an awkward weekend with the parents, it’s Guess Who’s Coming To Dinner only way more inflammatory, and much funnier. If really you had to put Jordan Peele’s masterfully abrasive satire into a genre slot, then it would be horror. Plenty of blood is spilt in its gory final scenes, but the most horrifying thing is not that all the victims are white and the perpetrator black, but that white audiences will be gleefully cheering him on. In the US, where crime and race remain explosive issues it’s been a huge zeitgeisty and box-office hit for Peele. With some Obama-era home truths and hypocrisies so brutally and entertainingly exposed, he’s really hit the bulls-eye. And Allison Williams’ fans (she’s Marnie in Girls) will be delighted to find she can play someone other than a self-involved narcissist. Though the exact nature of her role, which teasingly isn’t revealed until near the end, is one of the film’s most savage and delicious jokes.  MA15+ from May 4. ★★★★

Brett Whiteley struck the Sydney art world like a bolt of lightning in the 70s, and then vanished. For anyone who can recall those times or with more than a passing interest in contemporary art, James Bogle’s lively doco won’t reveal a lot that’s new – Whiteley and his wife Wendy very much lived their drama-filled life in public, though it’s still a magnificently nostalgic experience. The painter’s prolific diary musings and notebooks drive the narrative and give the film a brisk and fabulously garrulous impetus. Always a heavy drinker, once settled at Lavender Bay, heroin tightened its deadly grip, and he rationalised that with all that era’s idiotic mishmash of countercultural bravado. What a tragedy, he may have been an idiot, but he was a genius – no one doubts that or doesn’t wish he was now an old man, still painting, still dazzling us with his brilliance. CTC from May 11. ★★★★

You’ll need to buckle up tight for this breathlessly paced sequel – a non-stop fast and furious pulp action ride of near balletic beauty. With possibly even more gun fire and ferocious hand-to-hand combat than even John Woo’s early Hong Kong classics, the story hardly matters, all you need to know is that Wick (a spectacularly monosyllabic Keanu Reeves – so cool!) is a killer for hire and the world’s top mobsters all want to kill him. You are not a bad person if you enjoy this sort of thing. After some of the precious art-house movies on offer, watching a pretentious modern art gallery being demolished in a hail of bullets can be like a breath of fresh air. MA15+ from May 18. ★★★★

Much of Pablo Larraín’s dizzingly inventive movie is a shaggy dog cat-and-mouse game, and like his better known Jackie, it’s nothing if not unconventional. It’s set in his native Chile in the late 40s when communism was outlawed by the increasingly authoritarian right wing government, and the poet Pablo Neruda (played by Luis Gnecco), who was also a popular leftist politician, was forced into hiding. With his wife (Mercedes Moran) in tow, they slip from view into a succession of their supporters’ safe houses, but always pursued by a preening police inspector, Oscar Peluchonneau (Gael Garcia Bernal). Mixing up genres and shifting our allegiances all the time, the intoxicating tale is way looser and more fun that the directors’ better-known Jackie, but told with just as much freewheeling brilliance. MA15+ from May 25. ★★★★ 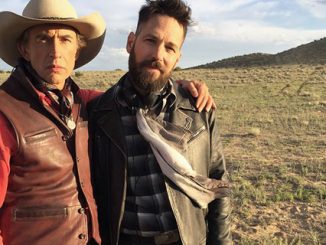