Michael Haneke certainly doesn’t like “privileged white people.” In film after film (Funny Games, Hidden and the excruciating Benny’s Video) he’s sliced through the hidden veneers of social ritual and acceptable behaviour to expose a toxic, violent ugliness beneath the complacent lives of the well-off middle class. The reason for all that anger has never been clear, a lot of the time he just comes across as a grumpy contrarian. But now his outrage seems to have a political point, for in Happy End, which screened at last year’s Sydney Film Festival, everything is framed, quite subtly by the European refugee crisis and the poisonous racial injustices of our times. And of course that title is icily ironic. The wealthy Calais family we spend an uncomfortable 110 minutes with is comically dysfunctional: Elderly patriarch Georges (Jean-Loiuse Trintignant) wants to die; his daughter Anne (Isabelle Huppert) is trying to sell her construction business after an horrific workplace accident; her pompous brother Thomas (Mathieu Kassovitz) is carrying on a lurid online affair; Thomas’s daughter Eve (Fantine Harduin) seems to have poisoned her mother and is now trying to settle into this totally screwed-up family, while Anne’s dopey grown son Pierre (Franz Rogowski) struggles with doing anything at all except disappoint his mother. It’s a smorgasbord of unhappiness, loneliness and madness often lensed with long, score-less static shots broken up with random bizarre scenes (why is Eve voyeuristically filming on an iPhone, and is she really feeding her hamster antidepressants?). Even though we’ve been primed for something darkly perverse to happen, the very last scene is stunner, and Haneke’s fans may be tempted to laugh out loud. I did, but maybe I am perverse. M from Feb 8, at Palace Norton St, Palce Central and Dendy Newtown (limited sessions). ★★★★

Want to see a movie about male circumcision featuring “graphic images of surgery”? Of course you do, and you can do that right now – exclusively at Dendy Newtown. Actually, John Trengove’s debut feature is about much more – the way men are moulded by ritual and social pressure into becoming “real men” – much the same themes explored more successfully in the much-praised Moonlight. That’s the real meaning of the title too – the damage done by the all-pervasive homophobia in the director’s native South Africa (President Jacob Zuma has famously declared homosexuality to be “Un-African”). We don’t see many South African films in this country, either at festivals or on the art-house circuit, in fact in the last ten years I can only think of one other. That was 2011’s Beauty by Oliver Hermanus – which was also about a closeted gay man and featured an act of confronting sexual violence. As does The Wound, which is being aired just in time for Mardi Gras and is suitably grim and confronting – for those of you who want to take the edge of the celebrations. But for those (you weird sickos) who want to see a penis being mutilated, actually, no – the camera stays at a discreet distance. Even so, all the males at my screening winced in audible discomfort. MA15+ at Dendy Newtown only from Feb 8. ★★1/2

Fifty Shades Freed Phew! It’s over at last – this is third and final chapter of this tawdry sado-maso potboiler trilogy; and The 15:17 to Paris  – labelled a “shocker” and “Clint Eastwood’s worst movie,” by the SMH‘s Paul Byrnes – who must have gone to the first available public screening. The distributors of both movies made sure no critics got to preview either. 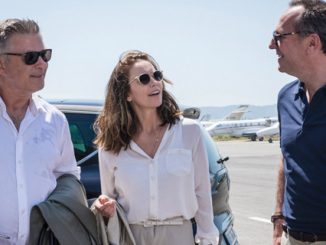