The Results are in….

With the election done and dusted and Tony Abbott getting ready to settle in to the Lodge (along with his daughters too apparently), we take a closer look at the election results in the Inner West…

Of course the seat of Grayndler (previously predicted to be the safest Labor seat in Oz) was won by former Deputy PM Anthony Albanese, who has now gone on to contest for leadership of the Labor party against Bill Shorten. Left or right, whatever way you swing, you can’t say it won’t be exciting to have an Inner Westie lead the Opposition.

When it came to the other parties however, the results were a little less obvious with Liberal’s Cedric Spencer coming in second, followed closely by Hall Greenland for the Greens. This was surprising considering the area is viewed by many to be the Greens’ heartland, yet the Greens vote dropped by 3.15%. Still it was a close race.

The Christian Democratic Party came in next with 1490 votes, while Palmer United secured 1301 and finally the Bullet Train for Australia Party nabbed itself 920 votes.

Here the Liberal Sean O’Connor got 21,683 votes while Labor defied the national swing against it and recorded a +3.2% for Tanya Plibersek –  who will probably end up Deputy Opposition Leader no matter who gets the top job. The Greens scored an embarrassing large minus 6.3% against them. Greens candidate Dianne Hiles blamed “the media” for her failure. Perennial candidate Jane Ward from Balmain scored her usual 1.5%.

We predicted that Liberal candidate, Craig Laundy, would take the seat of Reid from the Labor party candidate John Murphy and that’s exactly what happened – only just. Laundy came out ahead with 36,268 votes compared with Murphy’s 31,473. No other candidates came much closer with Greens candidate Pauline Tyrrell securing 5004 votes in third place (Pauline currently serves as the City of Canada Bay’s Deputy Mayor).

Meanwhile the Christian Democratic Party, the Palmer United Party and the Australian Independents Party candidates all secured themselves just over 1000 votes each. The Democratic Labor Party and Katter’s Australian Party trailed with 486 and 248 votes respectively.
*Numbers based on first preferences as of Friday 13th September, 1.23pm on the AEC website. 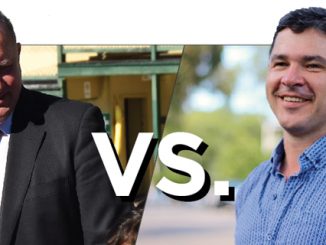