There are Boxing Day/Summer holiday movie guides everywhere, and they’re all telling you the same things, recommending the same films… La La Red Dog yadda yadda, and maybe they’re right, maybe not… We’ve seen most of the summer releases. You can trust us – you know you can!

So you’re accidently awake on a deep space voyage and condemned to be alone for 90 years, though you could wake up Jennifer Lawrence… But you wouldn’t do that, would you? You’ll hear some bad things about this movie. Ignore them – Our rating: ★★★★

Well, they are right. Emma Stone and Ryan Gosling do make best singing and dancing couple on screen anywhere. Yes you might cry at the end, but they’ll be tears of pure joy. Easily the best movie of the year: ★★★★★

This smart comedy-drama, a smash hit at the Alliance Francaise French Film Festival, is just the ticket if you like movies “light and life-affirming but not stupid.” (Reviewed below). Our rating: ★★★★

Can’t go wrong with two such good-looking stars like Brad Pitt and Marion Cottillard, right? But the Guardian warns, “Their screen passion bursts forth like a cold wet teabag falling out of a mug that you have upended over the kitchen sink and don’t much feel like washing up.” Ouch. Reviewed below. Our rating: ★★★

It skirts around the nasty legacies of British imperialism in Africa, but this tale of the ordinary English girl (Rosamund Pike) who falls for the future king of Botswana (David Oyelowo) is nicely told. And there’s nothing wrong with nice. (Reviewed below). Our rating: ★★★

You’ve finished binge-watching The Crown? The American royal family at the time of its deepest crisis gets similar treatment, with Natalie Portman getting that weird accent and odd voice mannerisms just right. What you’ve heard is true, she is good. Our rating: ★★★

Why go? It’s simple really, for toilet jokes, boner jokes, scrotum jokes. Surprisingly, the story does have its heart in the right place and James Franco and Byran Cranston both work hard with the dodgy material. They’ll even make you laugh – at least twice, hence: ★★ 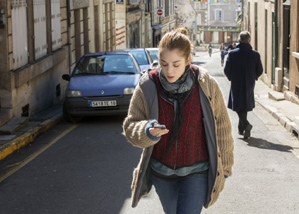 A prematurely balding hairdresser obsessed with a woman at least a decade his senior (to the point of stalking her) is an eccentric premise for a romantic comedy – even a French one. After a chance encounter and convinced he’s knows her from somewhere, Vincent (Kyan Khojandi) follows Rosalie (Noemi Lvovsky) around their small provincial town so ineptly that she, in turn, employs her slacker niece Aude (Alice Issac) to trail Vincent, just to see what he’s up to. The movie is divided into three parts, one for each for these characters’ POV, each segment revealing a little more about their lonely, oddball lives. Gradually it emerges that Rosalie also has a dark past… This adaption of a French graphic novel by debut writer-director Julien Rappeneau was the surprise hit of the French Film Festival at the beginning of this year, it was the opener, and its offbeat notes and breezily assured comedic situations struck a chord with festival-goers, guaranteeing several encore screenings before an inevitable general release. Which has taken a while, but better late than never for Palace Films, a local distributor with an impeccable track record of catering to those of us who (as the Hollywood Reporter says) “like their French films light and life-affirming but not stupid.” Yep, it is that, and more – in fact it may even be the smartest comedy you’ll see all summer. M from Dec 26. 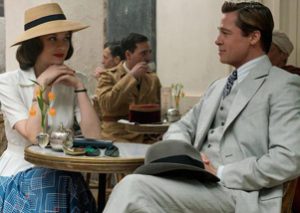 Anyone who stumbled across Casablanca nowadays could easily conclude. “Wow, they don’t make them like that anymore!” Not to say they don’t try, there have been many attempts at recreating that classic romantic thriller and Robert Zemeckis’ Allied is just the most recent. He’s even set part of it in war-time Morocco during the Nazi occupation of France too, included derring-do action, intrigue and betrayal, a grand sexy love affair and a dramatic climax at an airfield runway where everyone gets to make big passionate declarations dripping with longing and regrets. And very wisely he cast Marion Cotillard, whose feline mystery echoes Ingrid Bergman’s (even her hat is tipped at the same angle as Ilsa’s). So far so good… But Brad Pitt as Bogie?

That’s not to disparage Ms Jolie’s ex, he’s more than proved his acting chops many times over, but here he seems uncharacteristically wooden. He could have been puzzled by what sort of movie he was in. Well, anyone would be playing someone so handsome, competent and dashing (he’s a Canadian air-commander working for British Intelligence) yet so thoroughly and easily duped. The trailer reveals this, so no spoiler… But the truth is, there are too many elements thrown into the mix here, and the audience won’t know either. CTC from Dec 26 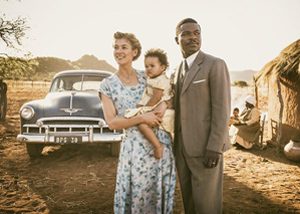 Amma Asante knows how to spin a gorgeous looking yarn and he does so again here, reversing the racial equation he so wonderfully explored in Belle. Ruth Williams (Gone Girl’s Rosamund Pike) is a white middle class clerk who falls heavily for a dashing black man (David Oyelowo) studying law at Oxford in the late 40s. Turns out he’s the future king of Botswanna, and not only were both families bitterly opposed to their marriage, the prince’s people, the British government and neighbouring Apartheid South Africa were all dead-set against it too.

This is a true story – Seretse Khama was the prince of what was once called Bechuanaland (then under the thumb of the British – all represented here by stuffy toffs and officious bureaucrats – and Ruth did marry him. He went on to become the country’s first president, she the first lady – both highly respected with a long record of accomplishments. But Asante determinedly fixes on the personal (and soapier) aspect of their love story in its early days, and the long separations that resulted from the various geopolitical machinations underfoot.

It’s nicely told too, and there’s nothing wrong with “nice.” Although it’s those politics, barely touched on, that may well have made a far more interesting story. Botswanna had vast resource wealth, especially in diamonds. But the viciousness of the racist divide-and-rule policies and brutal chicanery of the imperial powers would not have made for a “nice” movie – and much lauded centrepiece of the recent British Film Festival. Here the most valuable thing about Botswana seems to be its gloriously romantic sunsets. PG from Dec 26 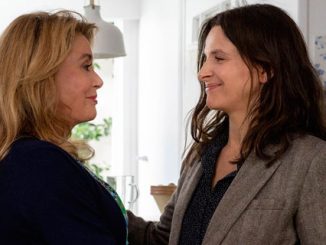 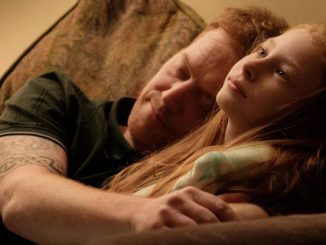 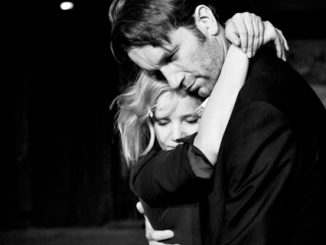