Like all of France (and much of the world) the Alliance Francaise French Film Festival was forced to close. The post below was written before the enforced shutdown of all cinemas in Australia.

Sure, it runs for a month and that may seem like a long time. But popular sessions can book out, so its always smart to do some planning. You could just choose everything that picked up an award at the recent Césars (Best Picture – Les Miserables, Best Actress, Anaïs Demoustier in Alice and the Mayor, Best Actor, Roschdy Zem in Oh Mercy, Best Screenplay, La Belle Époque). But there’s plenty more wild and wonderful offerings – like our eclectic picks below. Though as all regular festival-goers know, whatever you choose among this year’s 49 features, documentaries and even new TV shows, you won’t go far wrong…

We’ll End Up Together

By far the favourite of Ciao readers (according to our recent festival ticket giveaway), the English title is a literal translation of its French one, Nous Finirons Ensemble. Though the predictably unimaginative US one Little White Lies 2 would probably have served its box office potential better. 2010’s Little White Lies was a monster hit in its native France, and here it made a quite an impact too, at least among the usual suspects (arthouse and festival types). The story this time, again from French actor-turned-director Guillaume Canet and starring his partner Marion Cotillard, kicks off seven years after the events of the original as the group of friends reunite for a surprise 60th birthday party organised for Max (François Cluzet). The passing years have not been kind to him, nor is he pleased to see them – he’s in financial stress, divorcing and forced to sell the friends’ beloved summerhouse and reunion venue. But rest assured, there’s no way this group (which again includes Gilles Lellouche, Laurent Lafitte and Benoît Magimel) will be deprived of an opportunity for a weekend of their favourite Big Chill-style pastimes – boozing, bonking, bickering and bitching about the passage of time.

So once again they find a way to get drunk and horny while sharing explosive secrets that lead to the inevitable flamboyant recriminations and gallic bouts of hyper-introspection, while all the time everyones’ favourite old hits (Cyndi Lauper, Donna Summers) are belted out on the soundtrack. There are a few contrived surprises among the numerous sub-plots, but the formula works again. It certainly scored big-time in France, where Nous Finirons Ensemble became the second highest grossing film of 2019. Though the US may prove tougher crowd. It’s two American reviews so far (Hollywood Reporter and Variety), while generally supportive, simply couldn’t help noticing that all the cast are white and exist in a “bourgeois bubble that’s completely detached from contemporary French reality.” What, haven’t those socially backward European filmmakers and audiences got the memo? Where are the refugees and lesbians? CTC Trailer and bookings.

Firmly in that “bourgeois bubble” but tackling “contemporary French reality” head on, Bertrand Bonello’s strange and cerebral modern horror flick takes us first to Haiti in 1962, then to an exclusive enclave in present-day Paris. As in his 2016’s terrorism movie Nocturama (on Netflix, and well worth checking out), he tells another story of social class featuring wealthy but wayward teens. This time he does so in a way that directly references the social and economic dysfunction brought about by France’s less-than-glorious colonial past.

The two stories unfold simultaneously. In Haiti, a character based on a real-life figure, Clairvius Narcisse (Mackenson Bijou) dies but reawakens as a zombie and is forced to work as a slave in a French sugar plantation. Then we flash-forward to a swish Parisian private school where new girl Mélissa (Wislanda Louimat), whose parents died in the 2010 Haiti earthquake, befriends Fanny (Louise Labèque) and gets drawn into her elite clique. Fanny and her white friends are fascinated by Mélissa’s “exotic” background, and especially her “voodoo priestess” aunt (Katiana Milfort). Slowly and with excruciating suspense, the two narratives converge – with shocking results. A late shift to standard horror with its wildly flamboyant climax comes as a surprise though, given the arthouse tropes so successfully employed by Bonello. But still – Zombi Child is that rarest of creatures – a genuine shocker for brainy and discerning viewers. R18+ Trailer and bookings.

Playfully labelled “A Room with a Screw” (somewhat accurately) by one Cannes reviewer, Christophe Honoré’s prickly meditation on love, sex and marriage also has the English title On a Magical Night in some countries. Here its just Chambre 212, the hotel room law academic Maria (Chiara Mastroianni) storms off to after fight with her husband Richard (Benjamin Biolay) over her numerous and flamboyant sexual indiscretions with younger men. In fact it’s a room directly opposite their Montparnasse apartment, offering her a good view of whats going on. She still loves him, and her plan is to let her see Richard and their life together from a different perspective.

And it does, though in highly unexpected ways. During that one fantastically night she has a host of visitors herself, all determined to let her know exactly what they think of her and her choices. They include the aged 25 and still handsome Richard (Vincent Lacoste) himself, the man she fell in love with decades earlier, and the piano teacher Irene (Camille Cottin) that Richard had a long affair with before throwing his lot in with Maria. And she reconnects with some of her old lovers, who in turn, Richard meets too… If that sound impossibly meta and way too whimsical – it is a bit, but acerbic and savagely funny too.

An eclectic and quite magical soundtrack contains everything from Vivavldi to Charles Aznavour and even Barry Manilow, and Mastroianni is just sensational in the role she won best actress at Cannes in. Interestingly, mirroring her own cougar-like affairs – Richard’s own relationship with (an adult) Irene began when he was 14 years old. Now put aside that phone you’re ringing the child sex-abuse gendarmes with, and all other notions of appropriate behaviour. Remember, you’re in France. CTC Trailer and bookings.

Owing as much to Spike Lee as Victor Hugo, filmmaker Ladj Ly’s stunning re-interpretation of the 19th Century classic is as fearless as it is provocative. And its about as far out of that “bourgeois bubble” as it’s possible to get – we’re definitely on the wrong side of La Périphérique here, actually in the hardscrabble, housing-project-heavy section of east Paris where Hugo set a section of his “Misérables” too. White faces are rare but initially we’re in the company of some tough, foul-mouthed and cynical cops, who while chasing down a local teen who has (bizarrely) stolen a lion cub from a travelling circus, make a fatal mistake which leads to a riotous confrontation, and an ugly and incredibly tense climax. Reminiscent of the righteous urgency and passion of La Haine, Ly’s angry and unashamedly polemical film was an unexpected winner at Cannes (Special Jury Prize), and has since gone on to scoop up festival awards at an unprecedented rate including Best Picture at the Césars. It’s also become huge box office hit in France – clearly local audiences are unafraid of confronting the uncomfortable truths about the deep-rooted oppression and racism that continues to blight their nation. This is one not to miss. MA15+ Trailer and bookings. 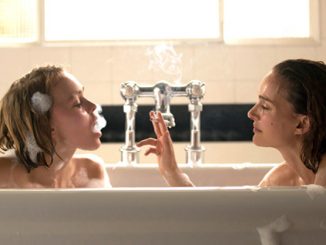