Weird looking cats, even stranger Nazis and girls in love… What more could you want on the day after Christmas?

Portrait of a Lady On Fire

A coincidence surely! Pornhub’s 2019’s trends survey was breathlessly released to the media last week, and it revealed “lesbian” is in the top three most searched categories on its portal; and right on cue, another all-girl romance turns up on Palace and Dendy’s screens, just in time for Christmas… Maybe the two are unrelated, but I’m getting suspicious. As film festival and arthouse movie-goers surely must have noticed, there sure are a lot of same-sex themed movies around – and overwhelmingly by a huge margin, the central characters are female. Now why is that so?

I’m not going to answer that, I’m not that game and anyway, prefacing a review of a genuine visual treat like Céline Sciamma’s nuanced and bittersweet romance on that note does it considerable disservice. But, I thought I’d better mention it, in case anyone thought they’re in for a round of Blue is the Warmest Colour-style bedroom gymnastics. Relax, stick to your favourite internet search, for Portrait’s writer/director is a queer woman with an impeccable pedigree – and her previous features (Waterlilies, Tomboy and Girlhood) have all worn their feminist cred proudly and with remarkable dramatic flair, but without a trace of dogma. If anything her fourth film is a sedate and mannered affair in comparison, with minimal dialogue and long slow scenes – though in looking at the way art and hidden passion can coalesce, she has breathed fresh and inventive life into the period drama.

The action takes place on an stunning island off Brittany in the late 18th century, where professional painter Marianne (Noémie Merlant) has been commissioned to produce a pre-nuptial portrait of Héloïse (Adèle Haenel) by the subject’s aristocratic mother (Valeria Golino). The finished work is to be sent to Héloïse’s future husband, a Italian nobleman. But Héloïse has refused to be painted, so Marianne has to pretend to merely be her “companion” on long lonely walks around the impossibly picturesque island, and then furtively paint from memory later. Cue lots of long lingering looks, for it turns out Heloise, an unworldly and enigmatic girl fresh out of a convent school, has no wish to be shackled to a man, especially a rich one she’s never met. But what’s a beautiful, confused girl in the 18th century to do? Maybe throw herself off a cliff into the crashing waves below, just as her sister did – surely!

It takes a while before the secret looks and the women’s growing intimacy turn into something else, and their long flowing gowns and bustles drop to the ground (while waves crash on the rocks below). No, that doesn’t happen, not quite like that, for all the while Sciamma has been subversively shifting the perspective from the beholder to the beholden, subject and object and then back again. Their love scenes are indeed quite erotic, but totally devoid of the usual artifice, and about as far removed from the possessive male gaze as its possible to get. Portrait is one of those rare films which will take your breath away in its most transcendent moments. And then it ends with a stunning long and poignant scene which, I promise, you will not see coming. M from Boxing Day. Local cinemas include Palace Norton Street, Central and Dendy Newtown ★★★★

Once again proving that her career is unblemished, Rebel Wilson turns up in Tom Hooper’s misbegotten adaption of Andrew Lloyd Webber’s much-loved musical Cats, but (once again) she’s there for fat jokes. It’s a star-studded affair with Taylor Swift, Ian McKellen, Judy Dench, Idris Elba, Jennifer Hudson, Jason Derulo, Ray Winstone and James Corden, and they’re all instantly recognisable, despite their truely excruciating CGI fur, whiskers and feline bodies, which only succeed in making them look grotesque. Guess what, the lady cats have boobs (nipple-less), but only newcomer Francisca Hayward in the all important role of Victoria looks like the sort of creature you might want to stroke and try to make purr.

Few of them do anything remotely cat-like, and certainly don’t spray noxious fluids about or cough up fur balls. They all do get a big number to belt out, and I could say more about that… But unfortunately through a good half of its 1 hour and 50 min runtime, I fell victim to the premiere’s free champagne, and ended up taking a cat nap. CTC from Boxing Day. On absolutely everywhere including Palace Norton Street, Central and Dendy Newtown ★ 1/2

Back in Year 7 a bunch of us gormless lads used to wander about the playground giving each other Nazi salutes and yelling “Sieg heil!” No doubt we thought ourselves terrible clever and somehow transgressive of the PC pieties of those distant days, but really, we were just a bunch of silly schoolboys… Which is a bit like the humour of Taika Waititi’s self-proclaimed “anti-hate satire”  JoJo Rabbit – which is in fact so toothless that it hardly qualifies as a satire of any kind. That’s not to say that its heart isn’t defiantly in the right place or that it doesn’t have a few good jokes (no, I wasn’t thinking of any of Rebel Wilson‘s) – just that it’s not as audacious or as ambitious as its multi–talented NZ filmmaker and some generous reviewers seems to think. (Waititi also plays Hitler, along with Scarlett Johansson and Roman Griffin Davis, below). A truely brave and timely piss-take might target modern-day hate as epitomised by Trump-style populism or the widespread rise (and rise) of social media-bred intolerance rather than invent a curiously agreeable Nazi Germany of 80 years ago for us to snigger at. As my partner asked as we exited, “Who was that made for?”

Some of the characters with no moral compass whatsoever in TV’s Succession (a superior satire by far) might put it all much better, and far more succinctly. Early in Season 2, one of them, Tom is asked to reprimand a right wing news presenter with Nazi connections on his staff: “Oh, he’s gone. I mean, Nazis, they’re terrible. Right?” On cue cousin Greg picks up on the question – with just brilliant inflection on his last word. “Nazis!” he splutters incredulously. “Yeah, yeah, they’re the… worst”.

In fact, two of the best… Ken Loach‘s angry and gut-wrenching Sorry We Missed You puts the boot into modern capitalism’s newest trick, the so-called “gig economy, so earning a well-deserved ★★★★ 1/2. Meanwhile, Japanese writer-director and Palme D’Or-winner Hirokazu Kore-eda (Shoplifters) returns to familiar turf (family troubles) in The Truth, this time in Paris (★★★★). We’ve reviewed both here. 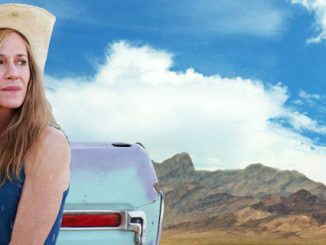