One of Balmain’s new emerging artists who has specialised in capturing the essence of the abandoned White Bay Power station is exhibiting a collection of paintings at Gallery 503 next week. Abandoned in 1983, but soon to be reborn, the original purpose of White Bay power station has long expired, but local artist Suzy King has been fascinated by the looming structure since 2009.

“Once marked the gateway to Balmain’s busy industrial waterfront and, understandably, its gigantic physical presence ensured it became a landmark,” Suzy said

“A quality it still retains. But now, this huge structure lies decaying in abandoned silence as it awaits a new beginning once the Baird government decides on development proposals.

“On some days its colours of rusting corregated iron contrast sharply with blue skies in the afternoon sun (rather like colours of the outback), and late in the day the light will impart a strong golden glow.

Suzy’s exhibition captures the huge building in 20 landscape, traditional and abstract paintings which have taken more than 12 months to complete.

“Dawn, dusk and rainy days change its perspective and its character. The power station has been a strong source of inspiration for me for many years and these paintings portray the feel of the corroded beauty of the structure.

The exhibition contains various paintings embracing the mood of the building in various lighting and from a number of different perspectives, which Suzy says snapshot its character before it changes forever.

Suzy King studied painting under renowned landscape artist Clem Millward then went on to The Sydney Institute Design centre graduating with a Diploma of Graphic Design. She practised as an award-winning designer for over 25 years.

In 2006 she turned to full-time painting and has since had successful exhibitions in Sydney, Melbourne, Brisbane and NSW regional galleries. Her paintings are held by collectors in Australia, Canada, USA and the UK. Suzy currently lives and works in Balmain.

Art Exhibition for one week only October 20-26 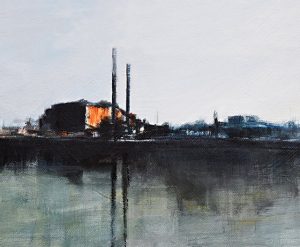