The words “forbidden” or “illicit” seem to always be used to describe the sort of relationship between Ronit (Rachel Weisz) and Esti (Rachel McAdams) portrayed in Sebastian Lelio’s new film.  But really? Forbidden? Having just sat through umpteen dozen lesbian relationships at the Sydney Film Festival, I’m beginning to wonder if there’s any other kind. At least in arthouse cinemas, surely we’ve reached peak lesbian! Though at least this one’s big steamy sex scene does contain something new – the ladies drool into one another mouths, a practise I didn’t even know was a thing… For all those of you who must now try that at home, note that (according to Ms McAdams) they tested several flavours of lube the day before, “settling on lychee-flavoured” for that all important money shot.

The sex is explicit enough to wonder about body doubles too – don’t stars of this stature have clauses in their contracts? Was the ghost of Harvey Weinstein hovering over the set ordering his lead actresses take off all their clothes? No, Ms Weisz is listed as producer, so that was her calculated decision, and clearly she knows what today’s arthouse cinema-goers want and expect. The rest of film, which concerns Ronit’s return home for her noted Rabbi father’s funeral after many years of exile for a previous teenage transgression with Esti, is a much more sedate affair. It’s set in a dour, ultra conservative Jewish enclave in North London where it is always chilly, drizzling and grey, no doubt symbolising the emotional coldness of the male-dominated orthodoxy Esti hasn’t been able to break free of. Except when exchanging body fluids with her old chum, that is, for yes, of course their affair is rekindled – despite her marriage to Dovid (Alessandro Nivola).

He’s a devout disciple of the faith himself and set to succeed Ronit’s dad as Rabbi, but far from being the disapproving villain of the prim patriarchal establishment we’re supposed to be booing, actually seems a pretty decent and liberal-minded guy. Now he’s threatened with losing the love of his life. That triangle is sensitively handled, this is indeed a “nice” love story which rises above its melodramatic underpinnings, and many will find it quite moving. Though I can’t help but wonder: If the “disobedience” had been a mere heterosexual transgression, would savvy investors have put a single dollar into this film? Would its film festival screenings been as packed? And afterwards, would it even get a single cinema screen? MA15+ from June 14. Local cinemas include Palace Norton St, Palace Central and Dendy Newtown  ★★★1/2

Grey (Logan Marshall) is a fashionably retro style of guy who likes listening to vinyl and tinkering with old 70s muscle cars. Upgrade is set sometime in the near future when tech runs everything and driverless cars are ubiquitous, though hipsters with beards like Grey are still around – apparently some things never change… Twenty minutes into the film one of the automated cars he’s in with his wife is hacked and highjacked by a gang of thugs – his wife (Melanie Vallejo) is sadistically killed and he’s left paralysed. With nothing to live for, he agrees to having an experimental implant inserted into his spine to restore his mobility. It’s been developed by a reclusive tech mogul called Eron Keen (Harrison Gilbertson) and any similarities between that name and Elon Musk is pure coincidence… The device is called STEM and it apparently knows everything about Grey already. It not only turns out to have a voice (Simon Maiden) with soothingly refined Siri-like tones which only Grey can hear, but also super-human capabilities – most of them malevolent. STEM effortlessly convinces Grey to avenge his wife’s death, and in the movies’ most bat-shit crazy scenes, takes over his entire body and turns him into an invincible killing machine. But only after politely asking permission to “operate independently”.

This is the brainchild of one the same sadistic masterminds that bought us the grisly Saw and Insidious films. That’s legendary Aussie horror writer-director Leigh Whannell – who filmed Upgrade on a low budget in Melbourne, and it’s a huge advance any of those multiplex products both in execution and intelligence. It’s certainly topical too – tapping into our growing unease of Silicon Valley’s relentless data harvesting and the dystopian future it’s billionaire moguls are mapping out for us. After being greeted with generous critical acclaim on the US festival circuit, it’s just premiered locally at the Sydney Film Festival. That’s all a bit curious… this is a film which isn’t even getting an arthouse release in Sydney, doesn’t have identity politics at its core and (cripes!) is directed by a man. As well its only POCs (persons of colour) are our killer hero’s dogged cop pursuer (Get Out’s Betty Gabriel) and assorted villainous thugs. Now how un-PC retro is that!?

But much of Upgrade’s warm approval is itself a retro throw-back to the days when high-brow critics, genre aficionados, cultural studies students and multiplex cinema-goers all liked the same sort of films. The last time that happened was back in the 70s. Upgrade isn’t perfect – its budget restraints show and the gruesome violence STEM dishes out is not for the squeamish (you may like to check the trailer before you decide if this is for you). But I saw so many boundary-pushing out-there movies at the film festival – none quite like this one. Many were excellent, but will any distributor touch them with a barge pole? Will a non-festival audiences ever see any of them? At least with this one, guaranteed to become both a mainstream hit and a new cult classic, they surely will. MA15+ from June 14. Local cinemas include Burwood and George St.  ★★★1/2

The Leisure Seeker, TAG and The Incredibles 2 – all not previewed (sorry, blame the Sydney Film Festival) 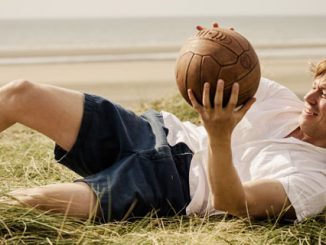