Movie of the week: Buoyancy

Few of us ever think about where all the stuff we buy comes from. Pretty much everything we do, from hopping into a Uber to buying fashionable gear from Uniqlo is decided by price and convenience – rarely do we stop and wonder why those goods and services are so cheap. But really, how is a 99c can of flavoured tuna at Aldi even possible? Ok, so we do know the dismal answer, on one level – but prefer not think about it… The problem is, that lemongrass and ginger tuna sandwich you enjoyed for lunch was probably the result of an an exploitative labour system far worse than any of us can imagine. And as it turns out, our everyday consumer choices encourage a diabolical form of modern slavery on the seas of South East Asia.

This the sort of issue we’d expect to see dealt with in one of those worthy docos, the ones film festival program notes say “you must see” but no one does. Wisely, Australian writer/director Rodd Rathjen chose a very different approach for his striking debut feature, and tells his story of labour exploitation as a harrowing drama instead. The result is a gripping, visceral, utterly convincing minimalist thriller – agit-prop cinema at its most persuasive. If it doesn’t fill you with rage about the way our international economy works, then nothing will.

Quickly and economically, the film sketches the bare bones of 14-year-old Chakra’s (Sarm Heng) plight. As it opens he’s labouring in the steamy heat of Cambodia’s paddy fields under the stern watch of his tyrannical father. But breaking free of those shackles by running off with a people smuggler after being falsely promised a job in a Thai factory only lands him in a worse situation – enslaved on board a smelly dilapidated fishing trawler run by a smirking sadistic skipper (Thanawut Kasro). His fellow captives are all trafficked Burmese, and there is no solidarity amongst them. Instead they fight over pitiful sleeping spaces and single bowls of cold rice they’re given after a day under the baking sun on deck, picking through the inedible stinking slush hauled up by the nets (destined for cat food, not your sandwich – thankfully). Occasionally a proper fish is caught – to be given to the murderous skipper and his henchmen in exchange for a tidbit of real food, or the loan of a porn mag for a brief escape from the tedium and misery. Then one day Chakra recovers a large bone…

There’s barely any dialogue in the last two acts, just hushed tension as a slow and claustrophobic cat-and-mouse game plays out. For Chakra, exploiting his role as the captain’s “apprentice”, knows he has only one way of coming out of his ordeal alive. The brutal incendiary climax is satisfying, if a little unlikely, though nowhere does this confronting film come across as merely a piece of useless Western hand-wringing. There’s no falsely sentimental feel-good ending for Chakra, who retains his agency throughout – and he’s never just a victim. At the very end are we confronted by our role in this horror. “There are currently 200,000 boys and young men enslaved on fishing boats in Southeast Asia,” comes a statement as the end credits roll, “part of a $US6 billion international industry which supplies forty percent of the world’s seafood, including Australia’s.” But by then, many in the audience will have already left. M from Sept 26 at Dendy Newtown ★★★★

Much to her many fans’ regret, the famously reclusive writer Donna Tart never allowed the massive best-seller The Secret History to be made into a film. Back in the 90s, her first smash-hit novel became a cultural phenomenon – it was the sensational literary/crime crossover hit that everyone was reading (remember that?). Multiple attempts were made to bring it to the big screen. At one point Gwyneth Paltrow and her brother Jake were on board as producer and director, but like all the other attempts, nothing came of it. The rights eventually reverted to Tartt, and she’s sat on them ever since.

In contrast, the film adaption of her 784-page 2014 Pulitzer-winning novel, The Goldfinch was a snap, it merely took six years to make. It’s a sprawling Dickensian coming of age story set within the lush framework of the art world on NY’s Upper East Side starring top-draw names like Nicole Kidman, Ansel Elgort, Sarah Paulson, Luke Wilson and Jeffrey Wright. Veteran screenwriter Peter Straughan (Tinker Tailor Soldier Spy, Wolf Hall) did the adaption, and it’s directed by John Crowley (Brooklyn). So it has everything – an impeccable talent pedigree as well as well as all the melodramatic high-jinks of Tartt’s first novel – what could possibly go wrong? Well, something did, for Tartt distanced herself from it (after taking a reported $3m payday) while the tepid reviews it earned at its premiere at the Toronto Film Festival and near disastrous 26% present score on Rotten Tomatoes put an rapid halt to all the Oscar speculation and planned red carpet openings. In Sydney this week The Goldfinch is turning up on a couple of arthouse screens only with almost no advance notice. Distributor Roadshow is normally no slouch in greasing the publicity wheels, but to my knowledge, there weren’t even any critics’ previews.

But as fate would have it, I did manage to see The Goldfinch early – in LA at a near empty downtown cinema in its first week of US release. And I’m happy to report it’s most certainly no disaster. Though trying to describe its triple-decker plot – rife with crises, existential angst, wildly unlikely coincidences and multiple personal betrayals in a brief capsule review is likely to be one… And I will confess, not having read the book, I was a bit confused at times, as most viewers will be too. But take that as an intellectual challenge, for the pay-off at the end, when the weighty symbolic meaning of its title (a very small painting of a bird) is finally revealed, is just sublime.

That comes after an exhilarating wild 149 minute ride that starts with a terrorist bombing at the Met and progresses through grief, trauma, throwing up wild, drug addiction, art-world intrigue through to a violent climax in Amsterdam. Those very late action scenes are a little silly, and knocked half a star of my review. But thanks to the fine cast, (especially Baby Driver’s Elgort, who carries the film superbly as the adult Theo, its central character and narrator) everything that happens is never less than very watchable, if not utterly compelling. Just take my word for it – but afterwards don’t, whatever you do, try to describe the plot to anyone. Even your best friend will be rolling their eyes after a few minutes and desperately trying to change the subject. Let’s make The Goldfinch our insiders’ secret. After its now inevitable local poor reviews (copycat, all of them) and no doubt short run, it’s likely to remain one. M from Sept 26. Local cinemas include Palace Norton St, Central and Dendy Newtown. ★★★1/2

The Dead Don’t Die Further proof that we have passed “peak zombie,” even the combined talents of cult director Jim Jarmusch, the ever reliable Adam Driver, Tilda Swinton, Chloë Sevigny and Bill Murray, even Iggy Pop as a flesh eater himself (I’ve always suspected that – he certainly seems to be enjoying that colon “sausage” he’s chomping on) can’t seem to breath life into this tired genre. According to the end credits, Jarmusch employed a “zombie movement consultant,” (surely one of the in-demand jobs in Hollywood at the moment), but the result is only mildly amusing – Jarmusch’s deadpan irony seems works better on less worn out subjects. His zombies shuffle about in the familiar aimless manner, here gravitating towards the things they liked doing when they were alive. “Coffee.” they plead. “Wi-fi.. Bluetooth… Xanax…” That’s funny, but hardly an original joke. In 1978’s Dawn of the Dead, George A Romero’s zombies invaded a shopping centre – just like the the crazed mindless consumers we’ve now all become. And as for the notion that the outbreak has been caused by capitalist greed (fracking at the North Pole in this case), that’s been the explanation for zombies since, well – forever. MA15+ ★★★

Meanwhile, those who need “inspiration” may find it in Ride Like a Girl, (unpreviewed) – which tells the story of Michelle Payne (Teresa Palmer), the first female jockey to win the Melbourne Cup, while anyone merely wanting to scare themselves silly could try Scary Stories to Tell in the Dark. It’s rating is M, though its thrills and chills are a decidedly cheesy and family-friendly PG. It makes nice use of its 1968 setting though, with several TV scenes showing clips of Nixon’s first presidential campaign and subsequent win. What happened after that really was terrifying! ★★ 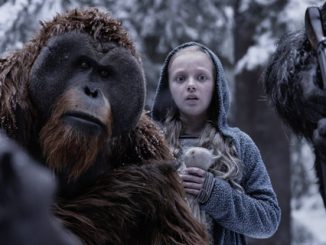 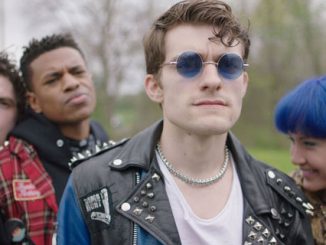 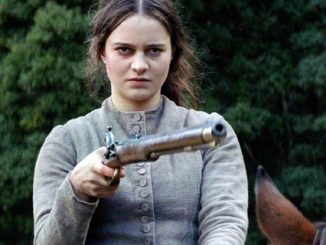