Jonathan Glazer’s hypnotic sci-fi nightmare offers so few clues as to what is going on that it helps to do a bit of research.

In Michel Faber’s novel, we’re told that the unnamed black-haired woman (Scarlett Johansson) is an alien and that the men she picks up are food – harvested for the culinary pleasure of her species. We do get that, after a while, but the drip-feed of information is so opaque in Glazer’s darkly atmospheric version that it’s easy to be disorientated.

That’s intentional but slowly the beautiful strangeness of this woman and the stunning soundtrack ropes us in. We move from unease to horror as she roams Scotland in a van, casually despatching her victims. Later, in a series of seductive encounters, she lures men from the streets of Glasgow, erections at the ready, into a deadly trap.

Some of the pick-ups were real, filmed secretly, and the poor guys probably couldn’t believe their luck. Until… Phew! It’s only a movie! And an instant cult classic.

★ Thanks to Palace Cinemas we have five double in-season passes to give away.
See our Giveaways page for details on how to enter.

Godzilla 3D is at one end of the spectrum – and Ida is way off the scale at the other!

Set during the Soviet domination of Poland in the ’60s, Pawel Pawlikowski’s austere B&W film tells the story of beautiful 18-year-old Anna (Agata Trzebuchowska), sent from her convent home to find her real family. Her only living relative turns out to be an aunt, Wanda (Agata Kulesza), a boozing cynic who is also a powerful magistrate in the Communist police state.

Taken aback by Anna’s naivity and innocence, Wanda figures she should know the truth – that her real name is Ida, that she’s not Catholic but a Jew. She then takes her on a bizarre road trip trough the wintery countryside and eventually they uncover the brutal reality of her family’s fate. Their journey encompasses much of Poland’s shameful recent past, and it puts Anna on a collision course with her destiny.

Ida has deservedly won heaps of awards – and it will haunt you with its exquisitely framed imagery and unanswerable moral questions. Quiet and compelling, it’s a small masterpiece.

M from May 29 at Dendy Opera Quays.

★ Thanks to Curious Films we have 10 double in-season  passes to give away.
See our Giveaways page for details on how to enter.

The Trip To Italy

A franchise? Maybe – such was the runaway success of Steve Coogan and Rob Brydon’s last jaunt through the Lakes District (The Trip), that surely these two motor mouths can now keep their bags packed for a decade.

Michael Winterbottom again serves up the same winning recipe – middle-aged angst, hilarious riffs, duelling Michael Caine impersonations, stunning Amalfi Coast scenery and ridiculously good-looking pasta – as the two play lightly fictionalised versions of themselves. This time Steve is the straight guy, off the booze (for about 10 minutes) missing his family while Rob is the unlikely lothario.

Rob’s always doing silly impersonations, even when on the make and yes, he is a very witty man. But finally, after two hours of it, we get the point: Rob, please – enough!

After Breaking Bad, Bryan Cranston could have had any role he wanted, so why did he choose this one?

He’s fine as the crazy man hollering about how the government “is hiding something” that “could send us back to the stone age” but totally expendable. And out of the story before we get to the action, or even see the real star – that famous great big lizard with anger issues.

But the rampage is worth waiting for, and Gareth Edwards has added a couple of amorous radiation-chomping mutants in the mood for mating too – just to add to the fun. 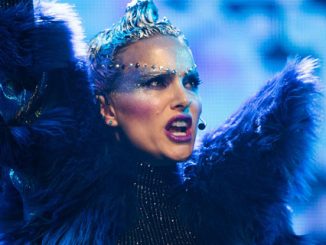