There’s an early scene of an old bus carrying our hero, Desmond Doss (Andrew Garfield) trundling into a Virginia WW2 boot camp, where he’ll soon piss everyone off by being a skinny vegetarian who refuses to touch a gun. Huh, I thought, their buses were the same colour as Sydney’s pre-war ones…

But of course not, Mel Gibson just borrowed it from Leichhardt’s newly opened bus museum – for every scene, even the magnificently staged and lengthy Okinawa battle ones where Doss displays his incredible heroism and courage as a medic, were locally filmed. And that’s not a reason why you should see Hacksaw, not when there are so many others.

This is a genuinely inspiring story of an exceptional man and a muscular return for Gibson – his first as director since 2006’s equally viscerally exciting Apocalypto. It’s been getting rave 4 and 5 stars from overseas reviewers, but it’s a pity that a few, like The Guardian’s can’t resist snide pot shots at Gibson’s religious faith and politics.

The movie is simply a triumph. Neither it, nor any of the local cast (Teresa Palmer, Hugo Weaving, Rachel Griffiths, Sam Worthington) and crew deserves to be collateral damage in some faux (and frankly boring) culture war. Just go, it is rather good.

Thanks to Icon Films, we have 5 double passes to giveaway. 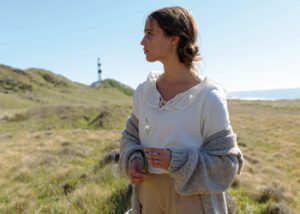 Best of the British Film Festival: The Light Between Oceans

Damaged WW1 vet Tom (Michael Fassbender) is the strong and silent type, with such a stiff upper lip that in one scene I thought my preview screener had frozen on a close-up of his moustache. Those bristles come off quick smart after he meets Isabel, a woman so luminously beautiful that she claims him with a single glance. (Alicia Vikander can do that).

They set off to live on a lighthouse way off the coast of West Australia, and thereafter he’s putty. She desperately wants a child, but can’t, then one day a boat arrives with a dead man on board and a miraculously alive baby girl. Tom is persuaded to keep the child, but wait – if you’ve read M. L. Stedman’s novel, you’ll know that lots more happens and many tears are shed.

Rachel Weisz plays the baby’s real mother, Derek Cianfrance directs. He reduced us to puddly messes before in Blue Valentine, and oh boy – has he done it again! Meanwhile the tears that roll down Ms Vikander’s cheeks alone could easily fill up one of those oceans.

CTC from Oct 27 at the BBC-First British Film Festival, then on general release from Nov 3.

*BBC-First British Film Festival is at Palace Cinemas until Nov 16. 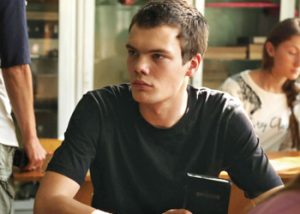 It’s only at Burwood and George St, but that shouldn’t bother serious movie-lovers looking for a bit of heft and gravitas. The Russians are good at that, damn good, (think Leviathan).

There’s only room here to recommend one similar stand-out from this year’s festival: That’s Kirill Serebrennikov’s The Student – an uncompromising drama about a problem teenager converted to militant Christianity.

Its broad critique of life in post-Soviet Russia isn’t served up on a platter – this is heavy-duty, as tough as it is exhilarating. You’ll be chewing over what it all means way into the night. 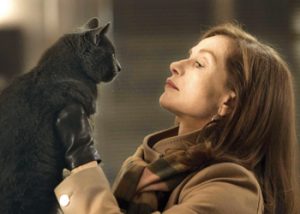 A comedy of manners about rape? You’re kidding, right? Not even the fearless Isabelle Huppert (whose role as a masochist in The Piano Teacher still makes me wince) or director Paul Verhoeven (Showgirls, Basic Instinct – say no more!) would dare, would they? Well they have, and it’s a nerve-jangling needling challenge.

If you are an inner west PC gender-warrior, you’ll have so much steam shooting out of your ears after this you’ll be picketing Palace Cinemas demanding it be closed down. But if you’re in the mood for a blackly comic and audaciously chilling treat, you’ll have more fun at the cinema since, well, Sharon Stone did that thing with her legs back in 1992. 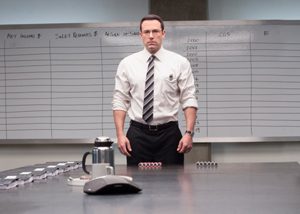 With the tragic murder of two autistic kids so fresh in our memories, this opens at an unfortunate time. Our “hero”, Christain Wolff, has a spectrum disorder, seemingly quite serious – as a boy he’s shown as excessively gifted but given to violent tantrums. All grown up (Ben Affleck) he’s just known as “the accountant” , his symptoms self-medicated and (only just) under control. Because autism means he’ll be brilliant with numbers (naturally), he can ply his bean-counting skills to the highest bidders on the planet. Which (naturally) means dodgy capitalists, drug lords and international mobsters.

Lacking empathy helps in this line of work, as does the sadistic boot-camp upbringing and weapon training his military dad gave him so that he wouldn’t be bullied. Both factors mean he can run amok like an amoral cyborg on a killing spree when required. And being a big-studio action-thriller, that’s going to happen…

How can we like such a character? The beauty of Gavin O’Connor’s movie and its tricky script – stretched as thin as dental floss, but it holds – is that we do. Affleck’s accomplished performance helps, as do several other plot lines (all quite ludicrous) featuring Anna Kendrick as his not quite love-interest and J. K. Simmons as a respecting FBI investigator hot on his tail. Anyway, we’re well used to moral ambiguity in movies, or should be… Mostly we’ll be swept away with the preposterously nutty story and genuinely thrilling action, rooting for the mad mathematician.

I left the screening impressed – mentally preparing a 3 and half star review. Only later, and mainly thinking about those poor kids gassed in their beds and the way mental disability had been used here, came the creepy feeling that I’d been conned. 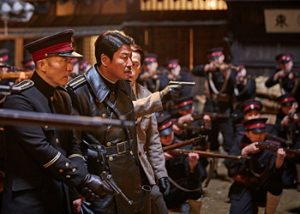 The Age of Shadows

Asian cinema is virtually unknown in the inner west. Our local art-houses stick to their now well-worn formulas – their idea of “non-mainstream” means a narrow range of Sundance frippery and French fluff. Sure, Palace’s international festivals now run back to back all year, and yes, they are very good. But think about it – which one of them celebrate the diverse and intelligent cinema of the countries most of Australia’s post-80s immigrants come from? I’ll answer that – none.

Step outside our increasingly rarefied neighbourhoods of Annandale and Balmain, where it’s now unusual to see a non-white face and there’s plenty of it to choose from – from Korean action blockbusters, Bollywood musicals and Chinese crime thrillers – in fact you only have to go as far west as Burwood and Rhodes.

And you really should for South Korea’s official entry into the 2017 Academy Awards – Kim Jee-woon’s The Age of Shadows – a gripping spy drama set during the Japanese occupation of Korea in the 1920s. It’s a ravishingly designed thriller of intrigue and double cross. Song Kang-ho (Snowpiercer) plays a police agent sent to infiltrate a band of armed resistance fighters, while Gong Yoo (Train to Busan) plays their dashing Che-like leader. At its centre is an excruciatingly tense extended chase on a train steaming between Shanghai and Seoul that rivals anything ever staged by Hitchcock.

Come to think of it, the action scenes are as balletic as those of Crouching Tiger, Hidden Dragon and as spectacular as Spectre’s. Now if that doesn’t get you out of your inner west comfort-zone, nothing will.