Don’t be fooled by Sydney’s blue skies – it is winter out there. And what better way to enjoy the cold weather than inside a heated cinema – visiting countries much cooler than ours. You can too, for as is usual at this time of year, the Volvo Scandinavian Film Festival is screening at Palace Cinemas. Once again it’s showcasing the very best of Nordic cinema.

Regular festival-goers probably have their own methods of working out which films they’ll take their chances on. A lot of people just head straight to the region’s best-known genre, the noir. And they’re well served this year, with the premiere of the last of the Department Q series, The Purity of Vengeance backed up with an encore of the earlier 3 parts – 2013’s The Keeper of Lost Causes, The Absent One (2014) and A Conspiracy of Faith (2016).

Equally well looked-after too are film-lovers with more adventurous tastes. Although for them, it’s often hard choosing. Nordic film-makers are consistently innovative and punch above their weight, but none of these five countries (Sweden, Norway, Finland, Denmark and Iceland) have large film industries, a Hollywood-style publicity machine or an army of complicit social media “influencers”. There are those descriptive blurbs in the festival booklet and on the official website of course, and they are a good guide. But it won’t come as a total surprise if I tell you that they’re written by the festival’s PR reps, will it?

If a film has screened at one of the larger European or North American film festivals – then there will be some reliable appraisals (in English) around. A good rule of thumb is if they’ve actually won something there. Or you can take our word for it too – for the lovely folk at Palace (and their talented PR people) have given Ciao a treat, and let us preview some of the movies. These three top picks have not only gathered international prizes and lavish critical praise, but are, genuinely, very good. Cinephiles shouldn’t miss them.

Winner of the best actor at Cannes and scooping up nothing but overwhelming praise, writer/director Hlynur Pálmason’s astonishing follow-up to his multi-award-winning debut Winter Brothers has already been picked up by a local distributor for later release. It hasn’t been given a scheduled date, so all I’d say is don’t take any chances – see it now. There’s only one publicity shot – and that’s the one above which shows an injured man, former police chief Ingimundur (Ingvar E. Sigurdsson) carrying a child (his granddaughter) along an icy fog-bound road in remote rural Iceland. That scene comes at the end of this consistently hypnotic small masterpiece, a film made all the more wonderful by its visceral score and lead actor’s powerful performance. At its the opening we follow a car moving slowly along an equally forlorn and fog-bound road. At the wheel with near zero visibility is that policeman’s wife, who we later learn, has been having an affair. Suddenly, the car heads over a cliff, tumbling down a mountain and into the sea. Ingimundur puts the pieces of his wife’s hidden past together slowly but right from the start, the director signals he’s going to tell the tale differently. Narratively, it’s a difficult film to follow, but an immensely imaginative, atmospheric and satisfying one. From that dramatic opening right through to its grimly enigmatic ending – you won’t look away. Info and trailer

With “90% of music fans using drugs” (according to the current NSW Coroner’s inquest into music festival deaths), it’s unlikely that Australian teens and young adults will be interested in this cautionary tale from Iceland by writer/director Baldvin Zophoniasson (who goes by the far snazzier title Baldvin Z). Perhaps their parents will be more receptive. 15-year-old Magnea (Elín Sif Halldorsdottir) is a promising student in Reykjavík who falls in with a wild party drug crowd, attracted by the vampishly beautiful Stella (Eyrun Bjork Jakobsdottir). The girls become lovers and their drug-use escalates to heroin rapidly, while the narrative zig zags between past and present. In the later years Stella is living clean with a settled family-life, but torn apart with guilt about her role in Magnea’s downward spiral. Deftly avoiding the cliched traps of many harrowing stories of addiction, Let Me Fall is an engaging and strikingly stylish look at all too familiar contemporary problem – told vividly and honestly without a trace of preaching. It’s interesting that Iceland in the late 90s had a huge youth substance-abuse problem (alcohol as well), the worst in Western Europe. But with an innovative range of interventionist and proactive programs, all designed around the idea of “giving kids better things to do”, today the small nation tops the European charts for drug-free living teens. It’s funny how our pill-testers, legalisers and reformers always point to Portugal, whose record of success in this area is quite debatable, rather than to a country that actually put the hard yards in and achieved something real. Or perhaps that lot have another agenda altogether. Info and trailer

There’s nothing here for those who think sci-fi means lightsaber battles or monsters flattening our cities, for Pell Kegermsan and Hugo Lija’s highly innovative debut feature from Sweden falls defiantly and triumphantly in the “cerebral” category of the genre. Based loosely on a series of epic science fiction poems by Nobel Prize winning Swedish poet Harry Martinson, it’s also like nothing you’ve ever seen in Nordic cinema before. After only a few brief explanatory scenes, we’re on board a giant spaceship full of wealthy European refugees fleeing an environmentally devastated Earth. But early in the voyage to a newly colonised Mars, a trip supposed to take only a few weeks, the huge vessel Aniara is hit by space debris and forced off-course. Eventually it’s stuck hurtling into the abyss, and years pass while the inhabitants sense of reality and the ship’s social order collapses. There are orgies, weird cults and epidemics of suicide although many of the passengers prefer not to face their fate and carry on using artificial intelligence to experience soothing visions of life back on Earth. Meanwhile an iron-fisted and murderous regime takes control. Though the source poem was written in the 60s, there’s an obvious topicality to this visionary and stylish cautionary tale. Intriguingly, rather than build expensive sets, the film’s designers used existing the interiors of Sweden’s sleek shopping centres to evoke this future. For anyone who has found themselves lost in Ikea, that feeling of existential doom will be all too familiar. Info and trailer 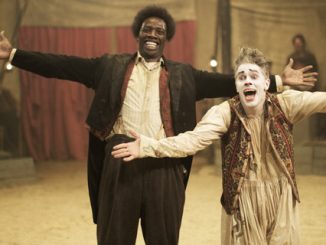